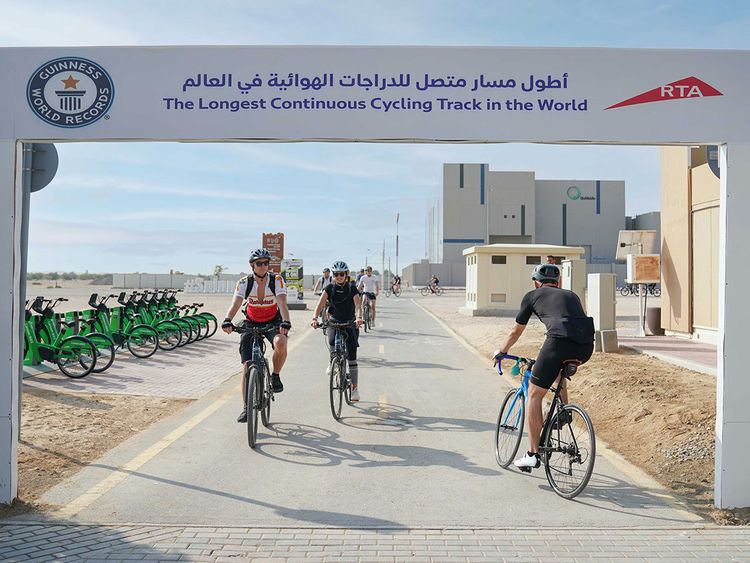 The Roads and Transport Authority (RTA) of Dubai has achieved a new Guinness world record that adds to its impressive tally of world records in having Al Qudra Cycling Track spanning 80.6 km declared as the longest continuous cycling path, surpassing the previous world record registered in 2020 for a 33 km cycling track, reported WAM.

The record was announced at the start of the track in the Al Qudra area in the southeast of Dubai by a representative of Guinness World Records.

The unveiling was spearheaded by Maitha bin Adai, CEO of Traffic and Roads Agency.

A marble plaque engraved was unveiled with the Guinness World Records logo installed at the starting point of the Al Qudra Cycling Track, near Last Exit Al Qudra. The plaque is inscribed with the record and the RTA logo.

“Besides being the longest cycling path globally, Al Qudra track is designed according to top safety and security standards. The track is fitted with relevant signboards and ground markings. It passes across extensive sand dunes and lakes that render it attractive and liked by cycling professionals and enthusiasts globally. The track runs over wide parts of Al Qudra area, which spans about 188 square kilometres.” she continued.

Al Qudra Cycle Track boasts of captivating natural tourist views and has shaped into one of the best camping destinations that attracts considerable numbers of cycling enthusiasts.