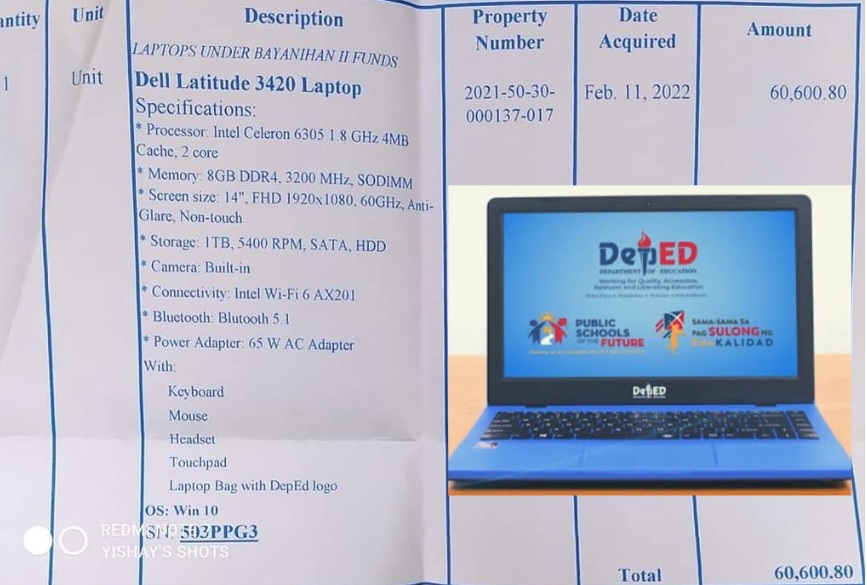 The Commission on Audit or COA report on the Department of Education for the year 2022 showed that it has purchased P2.4 billion worth of laptops last March for teachers which “are too slow because the processor is Intel Celeron, which is outdated”.

“The supposed number of laptops to be procured for teachers of 68,500 units was significantly reduced to 39,583 mainly due to the huge increase of estimated cost by Deped at P35,046 to P58,300 per unit anchored on the DBM-PS’ recommendation.

“Based on the initial feedbacks we gathered from the auditors in the NCR and Cordillera Administrative Region (CAR), they stated that the delivered laptop computers by the winning bidder are too slow because the processor is …. outdated; and the price is too high based on the specifications as attached to the DepEd Memorandum,” COA said.

“The price per unit is pricey for an entry-level type of laptop which resulted in significant decrease in the number of units provided to intended users. The huge difference of P23,253 per unit price resulted in a significant decrease by 28,917 laptop computers. Consequently, an estimated 28,917 teachers were deprived of the possible benefits from the supposed provision of these laptops,” it added.

“The base price of the same model of … laptop available in the market with a better screen currently monitored by the Audit Team revealed that the said model ranges from P22,490.00 up to P25,000.00 only,” COA continued.

State auditors want Deped to explain why they agreed to purchase laptops worth P58,3000 when theire is a much cheaper and better option.

This website uses cookies to improve your experience while you navigate through the website. Out of these, the cookies that are categorized as necessary are stored on your browser as they are essential for the working of basic functionalities of the website. We also use third-party cookies that help us analyze and understand how you use this website. These cookies will be stored in your browser only with your consent. You also have the option to opt-out of these cookies. But opting out of some of these cookies may affect your browsing experience.
Necessary Always Enabled
Necessary cookies are absolutely essential for the website to function properly. These cookies ensure basic functionalities and security features of the website, anonymously.
Functional
Functional cookies help to perform certain functionalities like sharing the content of the website on social media platforms, collect feedbacks, and other third-party features.
Performance
Performance cookies are used to understand and analyze the key performance indexes of the website which helps in delivering a better user experience for the visitors.
Analytics
Analytical cookies are used to understand how visitors interact with the website. These cookies help provide information on metrics the number of visitors, bounce rate, traffic source, etc.
Advertisement
Advertisement cookies are used to provide visitors with relevant ads and marketing campaigns. These cookies track visitors across websites and collect information to provide customized ads.
Others
Other uncategorized cookies are those that are being analyzed and have not been classified into a category as yet.
SAVE & ACCEPT
127 shares
Close