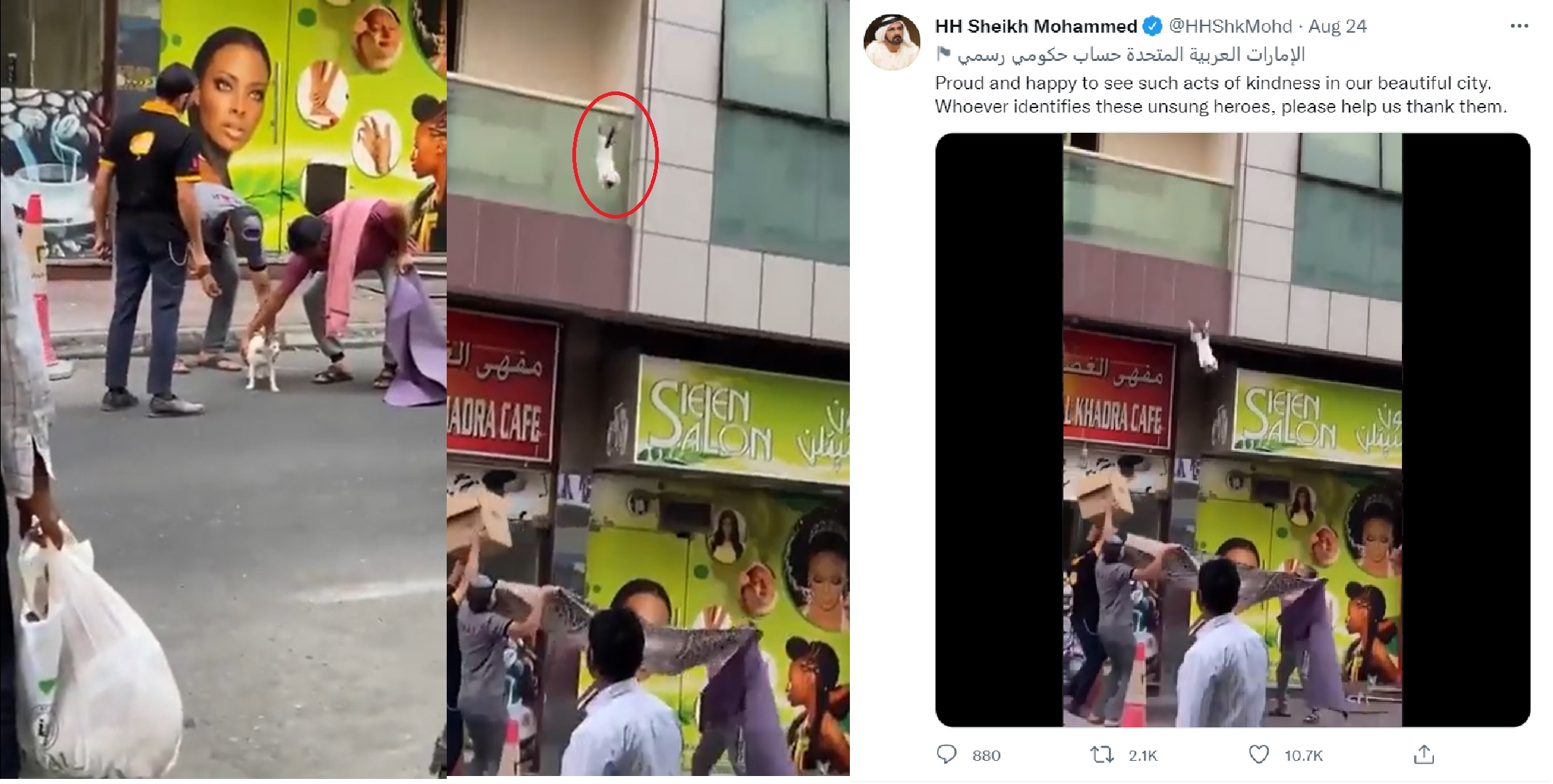 Good deeds are rewarded. However, the four men, who had caught a pregnant cat as she fell 30ft from a balcony, didn’t expect it to be so soon.

Each of them has received an AED 50,000 reward from Sheikh Mohammed bin Rashid Al Maktoum, Vice President and Prime Minister of the UAE, and Ruler of Dubai.

Earlier, Sheikh Mohammed had tweeted, “Proud and happy to see such acts of kindness in our beautiful city. Whoever identifies these unsung heroes, please help us thank them.”

The four people saved the cat by helping the animal jump on a sheet of cloth. Ashraf Blanza, a Moroccan national and a building guard, said he was attracted to the sound of the cat from the balcony of the second floor at around 8 in the morning. He attempted hard to ensure that it didn’t fall on the ground and was not harmed.

Atif Mahmud Nawaz Khan, a Pakistani national and a sales representative, was among the people who helped in the rescue as he was in the same street to deliver an order at a store. He said that he was overwhelmed with a sense of pride. Naseer Arakal Muhammad, an Indian national, and a driver, also helped out in the rescue.

Abdul Rashid Kotout, an Indian national, who made the video that drew the attention of the UAE ruler said he used to feed the cat daily and noticed that it was stuck in the balcony of the building opposite the store. He said he was relieved as he could feed her again. (AW)

Proud and happy to see such acts of kindness in our beautiful city.
Whoever identifies these unsung heroes, please help us thank them. pic.twitter.com/SvSBmM7Oxe

This website uses cookies to improve your experience while you navigate through the website. Out of these, the cookies that are categorized as necessary are stored on your browser as they are essential for the working of basic functionalities of the website. We also use third-party cookies that help us analyze and understand how you use this website. These cookies will be stored in your browser only with your consent. You also have the option to opt-out of these cookies. But opting out of some of these cookies may affect your browsing experience.
Necessary Always Enabled
Necessary cookies are absolutely essential for the website to function properly. These cookies ensure basic functionalities and security features of the website, anonymously.
Functional
Functional cookies help to perform certain functionalities like sharing the content of the website on social media platforms, collect feedbacks, and other third-party features.
Performance
Performance cookies are used to understand and analyze the key performance indexes of the website which helps in delivering a better user experience for the visitors.
Analytics
Analytical cookies are used to understand how visitors interact with the website. These cookies help provide information on metrics the number of visitors, bounce rate, traffic source, etc.
Advertisement
Advertisement cookies are used to provide visitors with relevant ads and marketing campaigns. These cookies track visitors across websites and collect information to provide customized ads.
Others
Other uncategorized cookies are those that are being analyzed and have not been classified into a category as yet.
SAVE & ACCEPT
273 shares
Close