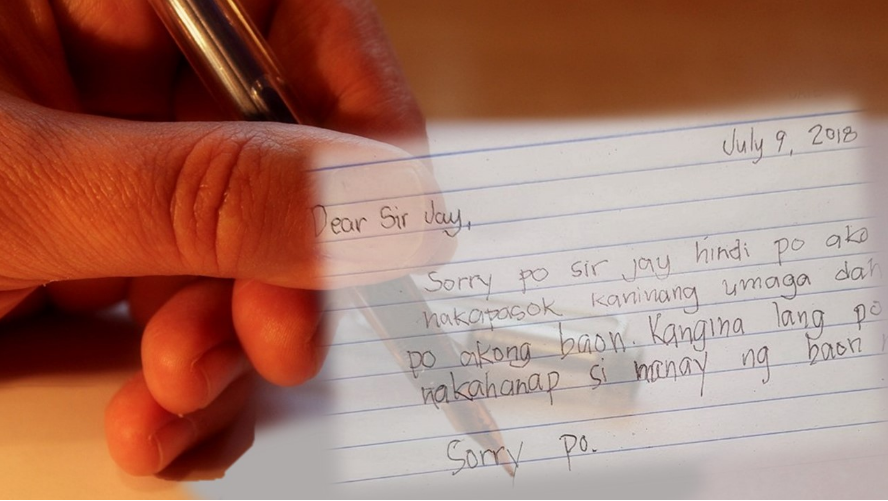 Who would have thought that an excuse letter would secure a girl’s education?

When 14-year-old Marinel of Bongabon National High School in Nueva Ecija handed her teacher a letter, she only meant to apologize and explain for missing her morning class. The letter went viral after being uploaded by her teacher Christian Jay Padilla Ordoña on Facebook.

The teacher narrated how he learned the heartbreaking reason why Marinel missed first period.

However, Ordoña noticed one morning that his class was not complete. When the classes resumed in the afternoon, Marinel timidly approached him.

Ordoña said that his student apologized for missing the morning classes. And when he asked the reason why, the girl handed him a letter coyly which contained words that she was too shy to say.

The student’s effort to come to class, despite being late, touched the hearts of many netizens.

In an interview with Coconuts Manila, Ordoña said, “When the student gave me the letter, I felt sad when I read it.

“It hit me: not all students who are absent don’t want to attend class or have fevers. Some don’t have the capability to go to class because they don’t have any food or money.

Marinel is only one among thousands of children who have difficulties in money, hindering their chances at education.

As of July 12, the post has over 59,000 reactions and 16,000 shares. This simple post has led to a downpour of donations to help Marinel earn a scholarship through the school’s foundation, Anak ng Bongabon Foundation, Inc.