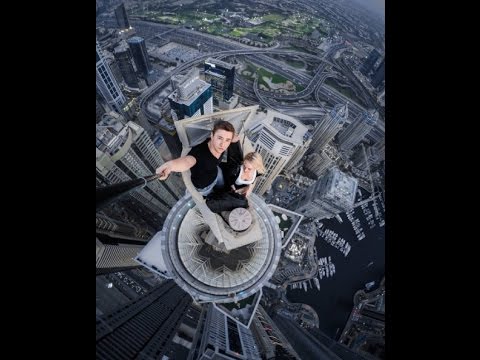 A Russian couple is seen taking selfies and recording a 360-degree video atop a skyscraper along Dubai’s Sheikh Zayed Road amid numerous warnings by authorities not to take on this illegal and dangerous stunt.

Accompanied by his girlfriend, certain parts of the video show Chernysh’s partner sitting on a very small platform while he stands on one side.

Chernysh’s Instagram page – which has 79,600 followers – also posted a photo of him and his partner on top of Cayan Tower – the same skyscraper that model Odinctova climbed a month back.

Apart from the ‘twisted tower’, his Instagram page also shows him atop other high-rises around Dubai, said KT report.

Earlier, responding to the Russian model’s dangling shoot atop Cayan Tower, property developer Cayan Group said that the stunt was carried out without the approval or permission of authorities at Cayan Group, and was in no way a reflection of the Group’s commitments to art, creativity, and the human spirit.

Gizel Daher, Director of Marketing & Communications said an immediate legal action has been launched against the team. She was also summoned by Dubai Police.