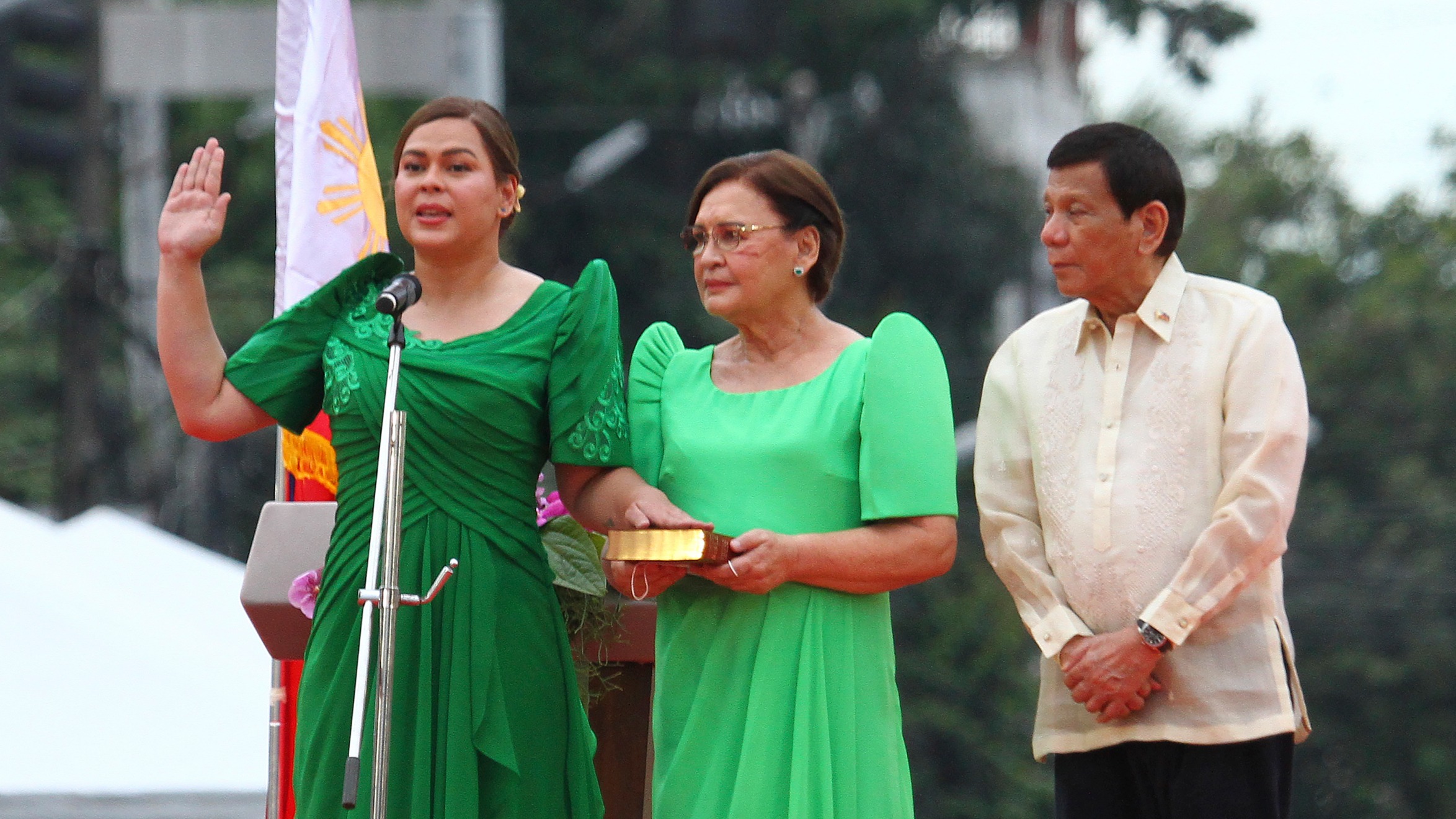 Sara Duterte, left, takes her oath as vice president beside her parents Elizabeth Zimmerman, center, and outgoing President Rodrigo Duterte during rites in her hometown in Davao city, southern Philippines on June 19. © AP

Duterte said the activation of the Vice Presidential Security and Protection Group (VPSPG) “is commendable as it will resolve the matter of continuity in security for all vice presidents of the Philippines” and the unit will secure the country’s second highest official and her family.

It will be separate from the Presidential Security Group (PSG), which secures the President and the first family as Sara said that the initiative of the Armed Forces of the Philippines (AFP) also highlights the importance of having an independent group that will provide all Philippine vice presidents with the necessary security and protection.

“Allow me to extend my gratitude to the Department of National Defense Secretary Delfin Lorenzana and the entire DND organization and Armed Forces of the Philippines Chief of Staff Gen. Andres Centino and the whole of AFP for the positive response and action to the request that a security unit, separate from the Presidential Security Group (PSG), be created and assigned to the office of the vice president,” Duterte said in a statement.

“The activation is commendable as it will resolve the matter of continuity in security for all vice presidents of the Philippines,” Duterte added.

“That foresight demonstrated in this activation was likewise highly laudable–that it may be expected to solve the challenges if, in future elections, the vice president and the president face the misfortune of having strained relations. Thank you very much,” she said.

This website uses cookies to improve your experience while you navigate through the website. Out of these, the cookies that are categorized as necessary are stored on your browser as they are essential for the working of basic functionalities of the website. We also use third-party cookies that help us analyze and understand how you use this website. These cookies will be stored in your browser only with your consent. You also have the option to opt-out of these cookies. But opting out of some of these cookies may affect your browsing experience.
Necessary Always Enabled
Necessary cookies are absolutely essential for the website to function properly. These cookies ensure basic functionalities and security features of the website, anonymously.
Functional
Functional cookies help to perform certain functionalities like sharing the content of the website on social media platforms, collect feedbacks, and other third-party features.
Performance
Performance cookies are used to understand and analyze the key performance indexes of the website which helps in delivering a better user experience for the visitors.
Analytics
Analytical cookies are used to understand how visitors interact with the website. These cookies help provide information on metrics the number of visitors, bounce rate, traffic source, etc.
Advertisement
Advertisement cookies are used to provide visitors with relevant ads and marketing campaigns. These cookies track visitors across websites and collect information to provide customized ads.
Others
Other uncategorized cookies are those that are being analyzed and have not been classified into a category as yet.
SAVE & ACCEPT
81 shares
Close