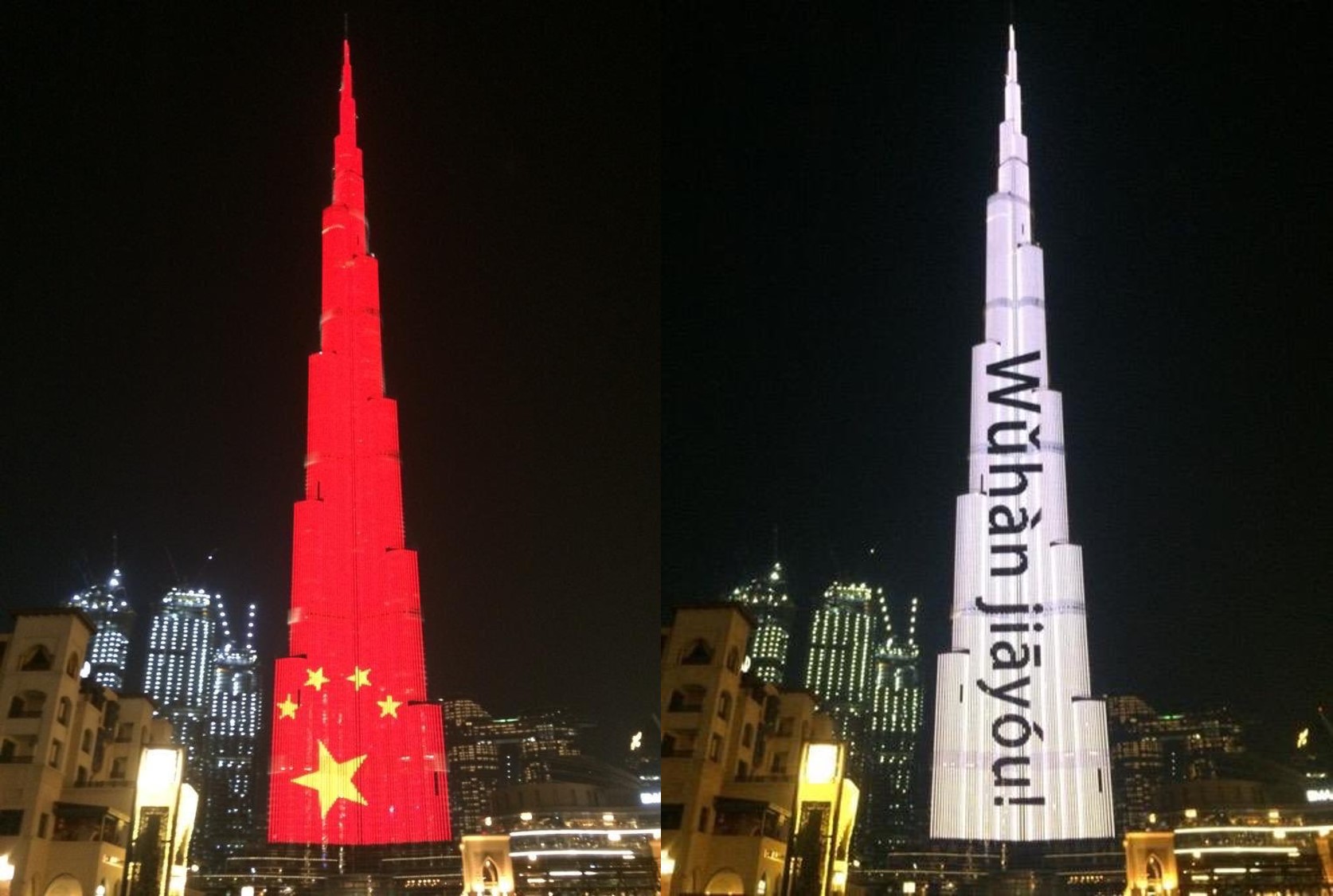 To show support for Wuhan and the Chinese communities around the world, Dubai’s Burj Khalifa lighted up on Sunday evening.
The iconic building showed the Chinese flag in solidarity with Beijing in its fight against the new coronavirus outbreak, which has now claimed the lives of at least 362 people in China.
It also reflected the words, “Wuhan Jiayou”, which means Wuhan, stay strong.
Other iconic sites including the “Capital Gate”, the Abu Dhabi International Market, the Emirates Palace Hotel, and the Sheikh Zayed Bridge in Abu Dhabi, Abu Dhabi National Oil Company (ADNOC), Burj Al Arab, and the Sheikh Hazza bin Zayed Sports Stadium were also lit until 12 midnight.
The initiative, according to a report by Emirates News Agency (WAM), comes within the framework of the strong solidarity stance shown by the UAE led by President His Highness Sheikh Khalifa bin Zayed Al Nahyan as well as the UAE’s its firm humanitarian approach and its willingness to provide all forms of support to the friendly People’s Republic of China to win the battle against coronavirus.
“The UAE confirmed its confidence in the ability of China to overcome this crisis and contain the spread of the Corona virus and its full solidarity with the friendly Republic of China and its people in all circumstances,” the release said.

#Dubai’s @BurjKhalifa lights up to show support for Wuhan and Chinese communities around the world. pic.twitter.com/81K8VaZqxF

This website uses cookies to improve your experience while you navigate through the website. Out of these, the cookies that are categorized as necessary are stored on your browser as they are essential for the working of basic functionalities of the website. We also use third-party cookies that help us analyze and understand how you use this website. These cookies will be stored in your browser only with your consent. You also have the option to opt-out of these cookies. But opting out of some of these cookies may affect your browsing experience.
Necessary Always Enabled
Necessary cookies are absolutely essential for the website to function properly. These cookies ensure basic functionalities and security features of the website, anonymously.
Functional
Functional cookies help to perform certain functionalities like sharing the content of the website on social media platforms, collect feedbacks, and other third-party features.
Performance
Performance cookies are used to understand and analyze the key performance indexes of the website which helps in delivering a better user experience for the visitors.
Analytics
Analytical cookies are used to understand how visitors interact with the website. These cookies help provide information on metrics the number of visitors, bounce rate, traffic source, etc.
Advertisement
Advertisement cookies are used to provide visitors with relevant ads and marketing campaigns. These cookies track visitors across websites and collect information to provide customized ads.
Others
Other uncategorized cookies are those that are being analyzed and have not been classified into a category as yet.
SAVE & ACCEPT
10209 shares
Close