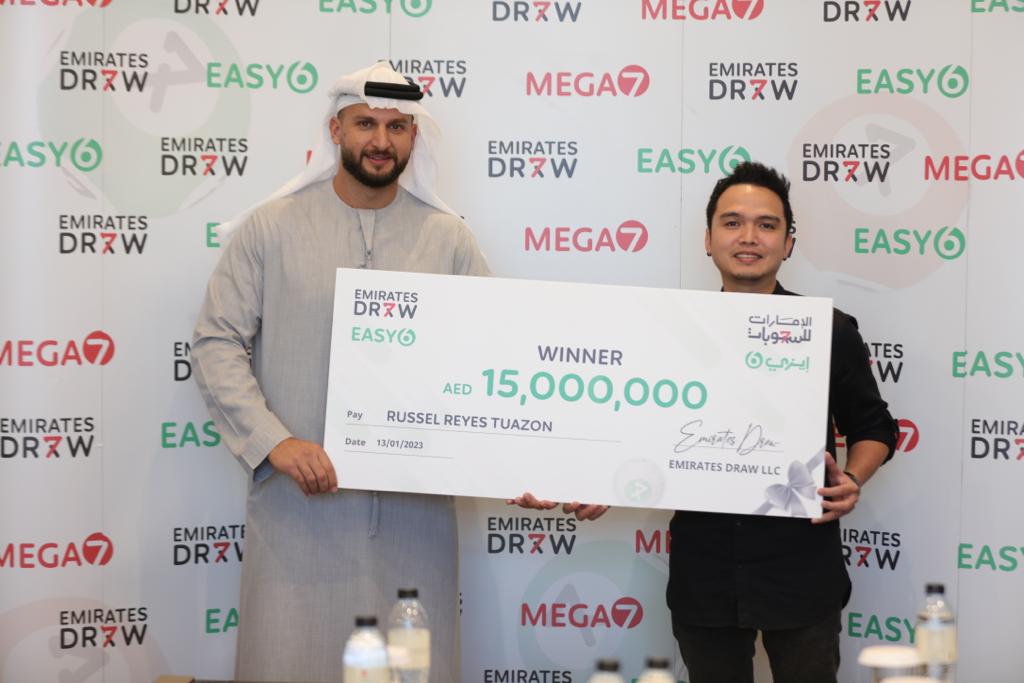 A Dubai-based storekeeper has turned Friday the 13th as a lucky day as he claimed an epic AED 15 Million Grand Prize during Emirates Draw last January 13.

34-year-old Russel Reyes Tuazon who hails from Mabalacat, Pampanga won on his first try and joined the draw for only 15 dirhams.

Being the second eldest among four siblings in a family of a humble background, Russel migrated from the Philippines to the UAE in 2008 at the age of nineteen, leaving behind his parents and siblings. He could only pursue education after high school due to family obligations and the state of finances. Despite the odds stacked against him, Russel refused to let his circumstances define him. 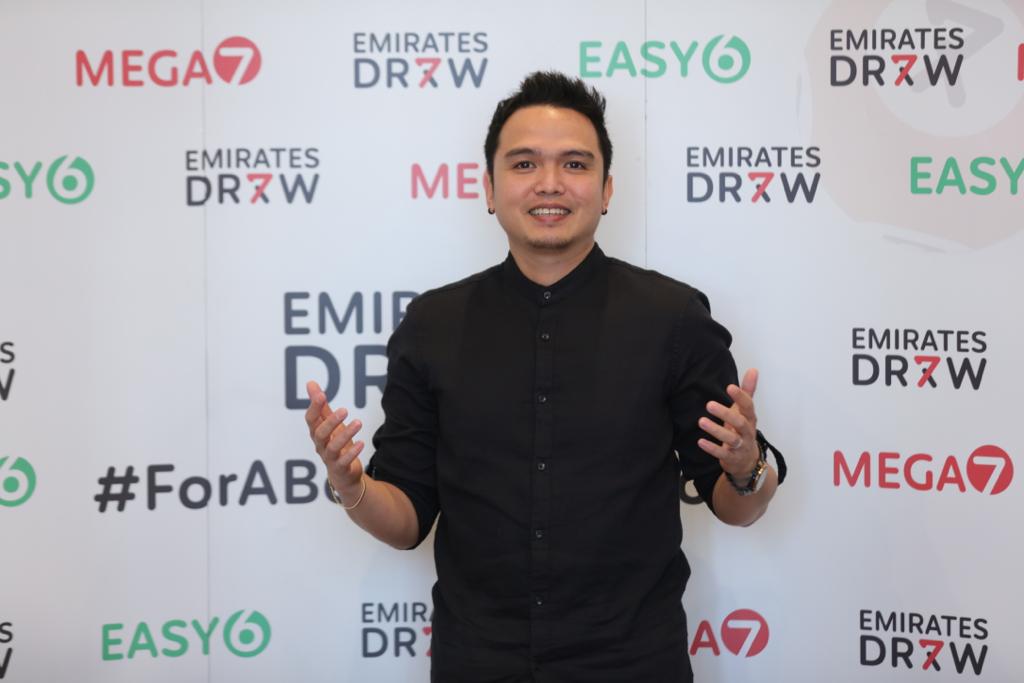 He began his career at the very bottom of the Food & Hospitality industry, working in restaurants and kitchens. However, he always maintained his goal to provide for his family and improve his situation. Working tirelessly, supporting his parents and siblings back home while building a life for himself in the UAE, he faced many challenges but never gave up on his dreams.

Russel met the love of his life in the UAE, married and became a father to a 7-year-old boy. Even the pandemic could not dampen his spirit as he continued his pursuit of ‘For A Better Tomorrow’.

“I had to send my wife and child back to the Philippines when the pandemic began in 2019,” he recalls. Russel presently works as a storekeeper for a Brazilian restaurant.

And it’s as if the universe paid off Russel’ persistence in big way as he changed his life forever with his first-ever win of AED 15 million. 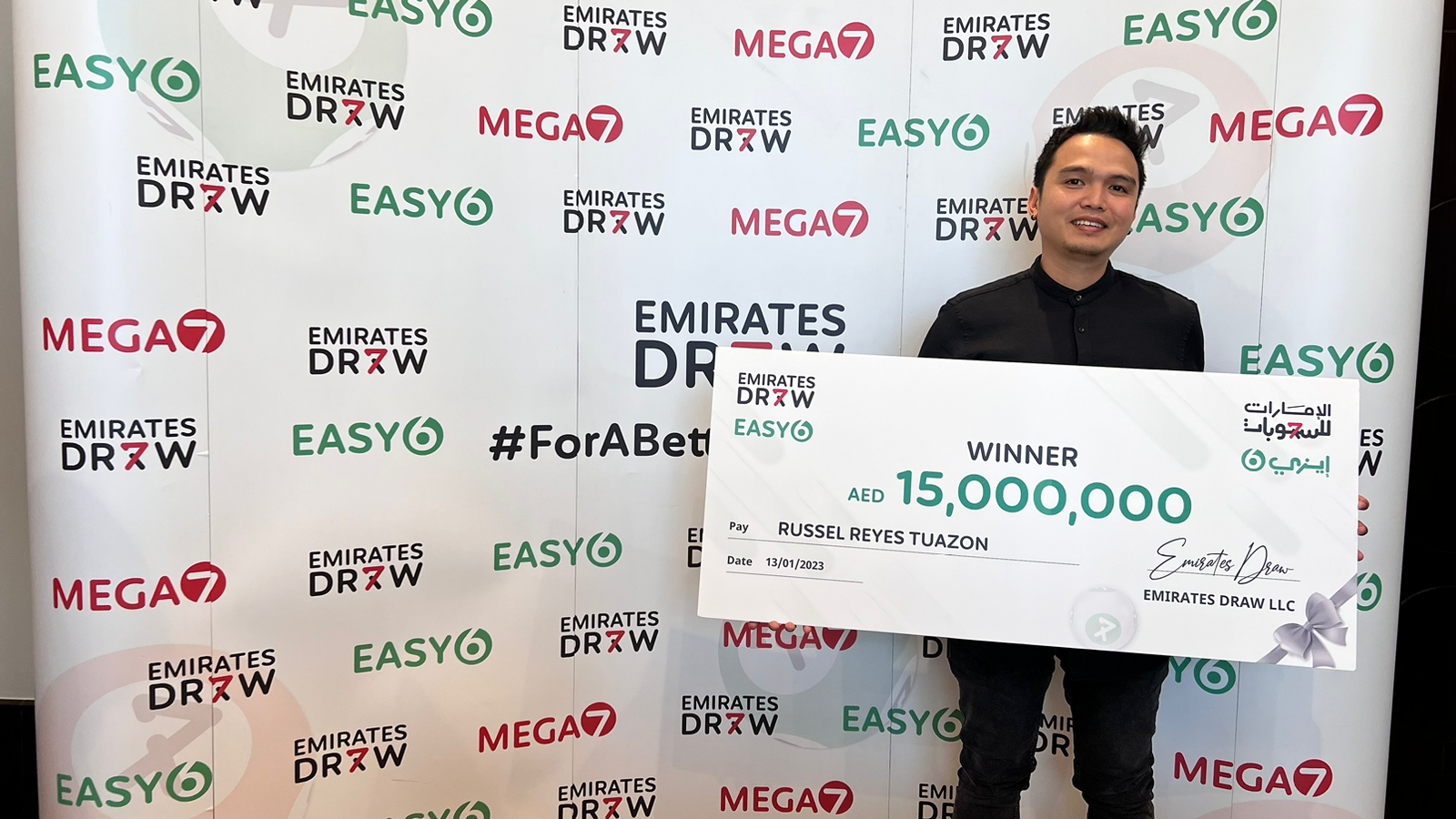 According to Russel, the numbers are special to him as they are a combination of their birthdays.

Tuazon said that he plans to open a business in his line of work which is food and beverage.

“Most importantly, Russel’s story is a testament to the power of hard work and determination. He encourages others to continue working towards their dreams, no matter how difficult the journey may be,” said Emirates Draw in a press release.

Tuazon’s message to those who are also aspiring to have a big shot in life: “keep trying to receive the unexpected because one day, it may just come true.”

He also encouraged fellow OFWs to be willing to make small sacrifices.

“To get something extraordinary in life, you must be willing to make small sacrifices. For example, AED 15 is nothing compared to its potential grand reward of AED 15 million. When I came to this country as a teenager, I had no idea my life could change the way it did. I will complete fifteen years in the UAE this year and am blessed with AED 15 million!” encouraged Russel.

Russel Tuazon is the first millionaire of Emirates Draw this 2023.

The epic AED 15 million Grand Prize has been claimed again in the past four weeks and is still up for grabs by a single person or group of people who match all six numbers. Try the Easy-to-play Easy-to-win game this Friday, 27th January 2023, at 9 PM UAE time.

The upcoming games will be live streamed across Emirates Draw’s digital platforms, YouTube, Facebook, and website. Be the next lucky winner and book your numbers early! For more information, call the toll-free number 800 7777 7777 or visit www.emiratesdraw.com. Stay tuned for the latest updates on our social media platforms @emiratesdraw.

This website uses cookies to improve your experience while you navigate through the website. Out of these, the cookies that are categorized as necessary are stored on your browser as they are essential for the working of basic functionalities of the website. We also use third-party cookies that help us analyze and understand how you use this website. These cookies will be stored in your browser only with your consent. You also have the option to opt-out of these cookies. But opting out of some of these cookies may affect your browsing experience.
Necessary Always Enabled
Necessary cookies are absolutely essential for the website to function properly. These cookies ensure basic functionalities and security features of the website, anonymously.
Functional
Functional cookies help to perform certain functionalities like sharing the content of the website on social media platforms, collect feedbacks, and other third-party features.
Performance
Performance cookies are used to understand and analyze the key performance indexes of the website which helps in delivering a better user experience for the visitors.
Analytics
Analytical cookies are used to understand how visitors interact with the website. These cookies help provide information on metrics the number of visitors, bounce rate, traffic source, etc.
Advertisement
Advertisement cookies are used to provide visitors with relevant ads and marketing campaigns. These cookies track visitors across websites and collect information to provide customized ads.
Others
Other uncategorized cookies are those that are being analyzed and have not been classified into a category as yet.
SAVE & ACCEPT
6933 shares
Close