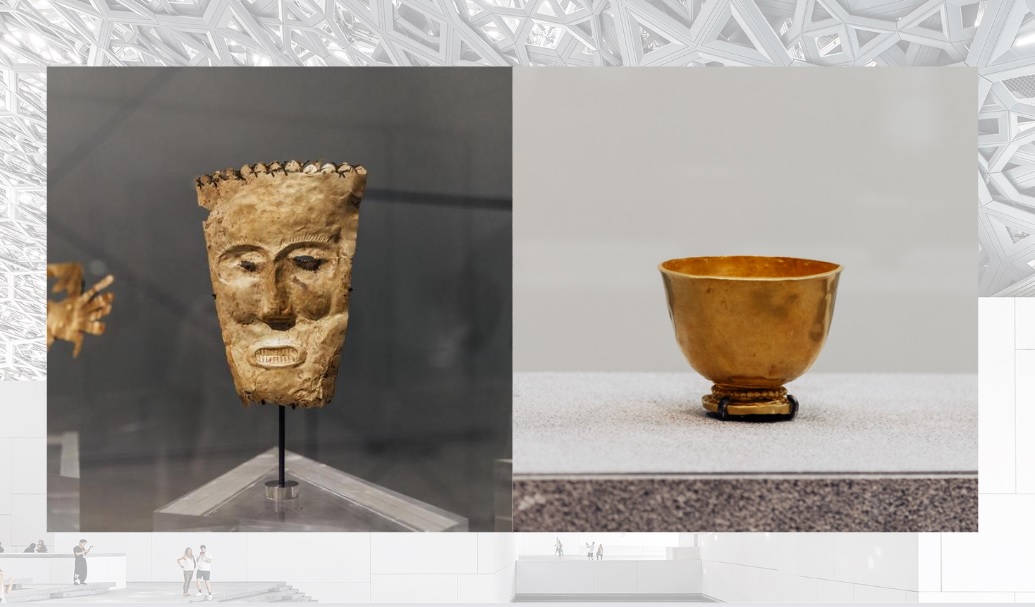 The Gold Mask (left) from Agusan Del Norte, and the Gold Cup (right) from Camarines del Sur in the Philippines are now on display at the Louvre Abu Dhabi.

The Louvre Abu Dhabi has added two new artifacts from the Philippines for UAE’s global visitors to marvel at.

From the entrance at the Louvre Abu Dhabi’s “Grand Vestibule”, visitors will see the “Gold Mask” first discovered in Butuan, Agusan Del Norte. Meanwhile, in Wing 2, visitors will see the “Gold Cup” excavated from Nabua, Camarines del Sur. Both artworks date back to the 10th-13th century and are part of Ayala Museum’s permanent exhibition, titled GOLD OF ANCESTORS: Pre-Colonial Gold from the Philippines.

Philippine Ambassador to the UAE, H.E. Hjayceelyn Quintana said that these new additions from the Philippines to Louvre Abu Dhabi’s growing collection of artworks around the world prove that the museum is indeed a cultural beacon where visitors can get a glimpse of humanity’s history ingrained from each relic on display.

“The 27th day of June 2022 is a milestone day in Philippines-UAE cultural relations as 2 rare and exquisite treasures from the 10th to 13th-century societies of the Philippines were installed for exhibition at the Louvre Abu Dhabi. This collaboration is another testament to how effectively the Louvre Abu Dhabi, as a cultural beacon, plays its role of “bringing different cultures together to shine fresh light on the shared stories of humanity,” thereby making the Louvre Abu Dhabi a truly universal museum,” said Quintana. 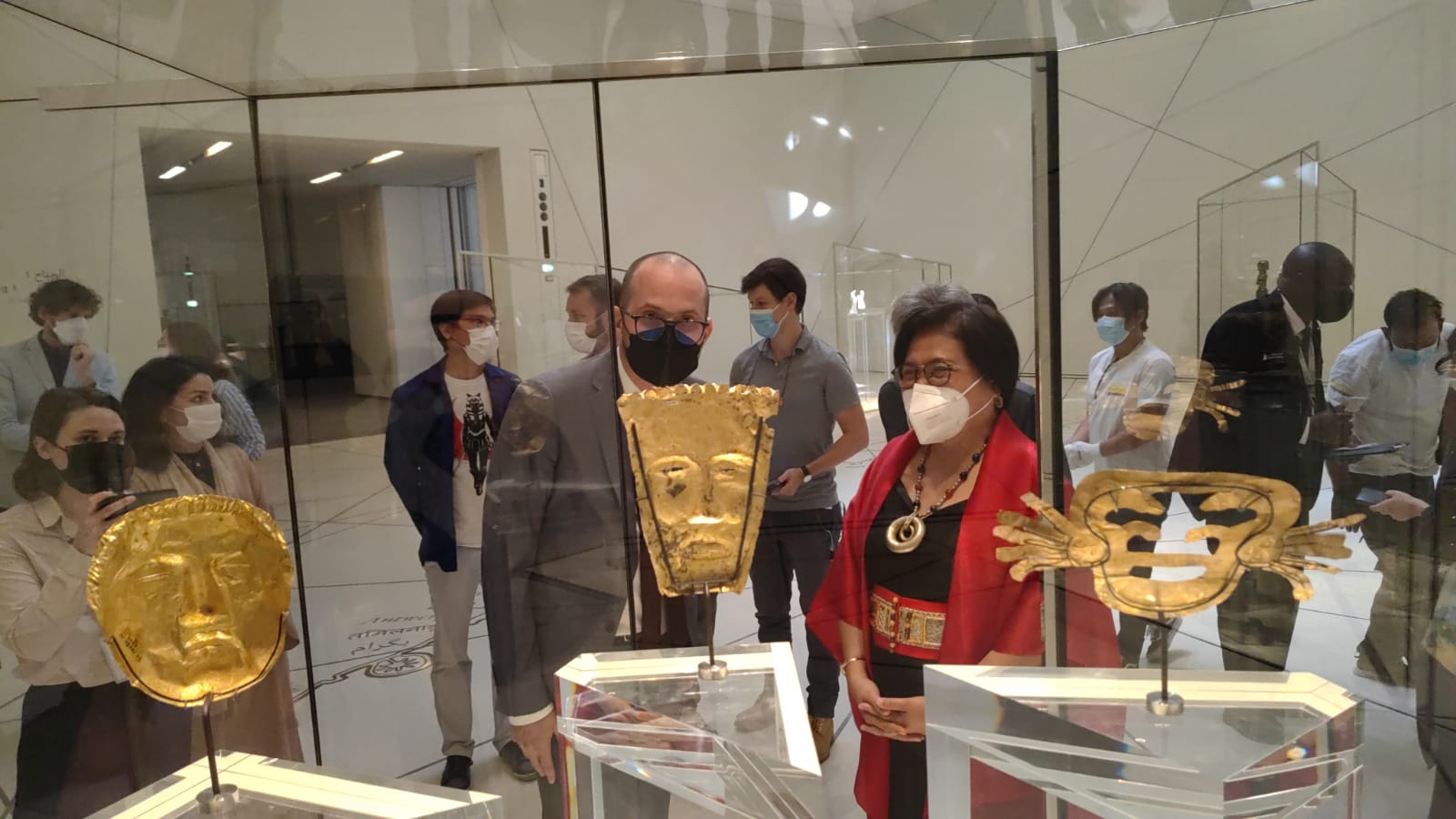 She added that this presents a rarely talked about yet historical facet of the country’s abundance of gold that existed as early as the 10th century.

“When colonizers came to the islands that are now the Philippines, they encountered cultures with a highly developed knowledge of gold. It’s in the whole lifestyle of the people that populated the various islands of the archipelago which was part of that era that historians called a “robust maritime trade and cultural connections in Southeast Asia that was experiencing an early Asian economic boom,” said Amb. Quintana. 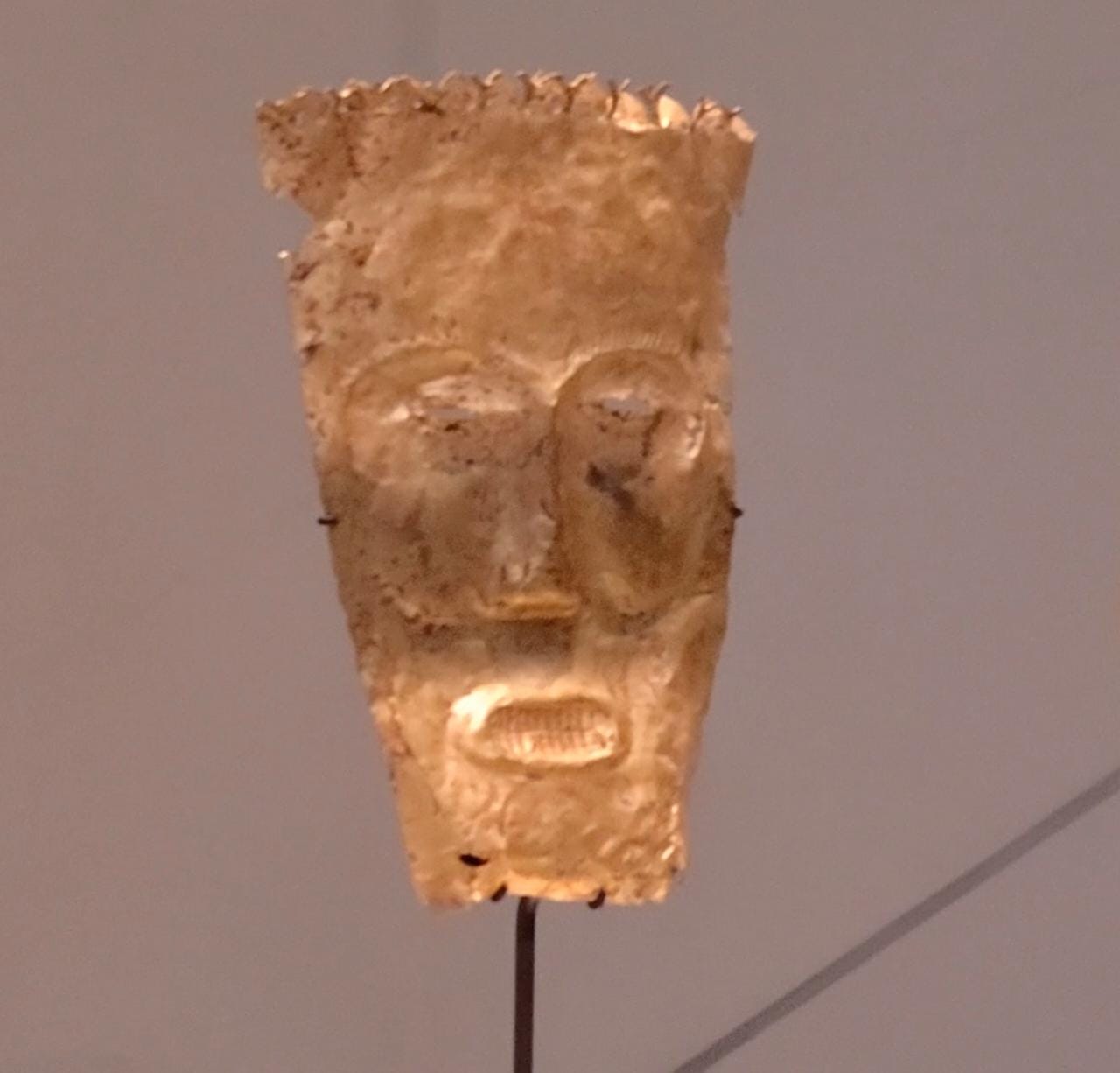 She added: “I am grateful to the leadership of the UAE, the Ministry of Culture and Youth headed by Her Excellency Minister Noura bint Mohammed Al Kaabi and the Director and the wonderful members of the curatorial team of the Louvre Abu Dhabi. The showcasing of this magnificent private collection from the Philippines’ premier museum, the Ayala Museum, represents a fascinating facet of Philippine history which adds great significance as we celebrate this month the 124th anniversary of the Philippines’ independence and this year, the 48th anniversary of Philippines-UAE diplomatic relations. Indeed, this brings tremendous national pride to the Filipinos not only in UAE but Filipinos in the Philippines and around the world.”

For his part, Manuel Rabate, Director of the Louvre Abu Dhabi, marked the partnership as a new milestone for the museum in its aim to connect the world’s cultures under one roof.

“The first one that you will see which is the golden mask will be in one of our showcases at the entrance of the museum. It will be part of the universal story of connected history. In the lessons on anthropology, as humans, we always had this fascination for gold as a way to go beyond death. And that’s a ritual which is universal. We have all that in common. So this is a story we’re telling. That is why it’s important to have these objects because they find their place in our story.”

He added: “I think it’s a huge milestone for the relationship between both countries and the Louvre Abu Dhabi and the Ayala Museum. This is what Louvre Abu Dhabi is about: Connecting cultures, knowing and understanding each other. In the UAE, the presence of the Philippines is so important. We have so many residents who are Filipinos and so many Filipinos traveling to the UAE so I think these two artworks are very, very important for all the Filipinos who will visit the museum. It’s a way to look at culture with something that will resonate with what you are, and then you can go inside the galleries of Abu Dhabi and see the story of the world,” said Rabate.

Kenneth C. Esguerra, Senior Curator and Head of Conservation at Ayala Museum, highlighted that this conveys the Philippines’ rich culture with complex civilizations even before the Spaniards first came to the islands.

“The joy of sharing our rich cultural past, specifically to all the Filipinos working and residing here in UAE is immense. Ayala Museum intends to inspire every Filipino in what he/she learns from the objects and exhibitions that we curate and exhibit. And because of this collaboration, the chance to inspire our own Filipinos living in UAE is now here,” said Esguerrra in an exclusive interview with The Filipino Times.

He added that this marks the fruition of a four-year effort initiated by the Philippine Embassy in the UAE to find a way for how two iconic museums could collaborate.

“This loan of objects is the result of the efforts of our ambassador to UAE, Her Excellency Ambassador Hjayceelyn “Joy” Quintana, who in 2018 visited Ayala Museum with the hope of cementing a collaboration between the 2 museums. And with what she initiated, this is now the result!” added Esguerra.