Twenty-four-year-old Genevieve, admitted later that it took a while for the announcement of her winning the coveted crown to sink in as she was sure that crowd favorite Tathee would go home with it.

In fact, when the announcement was made, the Bicolana beauty, wearing a royal blue off shoulder evening gown that fateful night just stood in the middle of the stage dumbfounded. She needed to be signaled by the floor director to come down the stage to be crowned by world renowned fashion designer and one of the pageant’s judges, Ezra Santos and TFT editor-in-chief, Karen Remo.

“Honestly speaking, it took a while for me to realize that I was crowned as the first ever Ms. TFT Pinay Beauty 2016. The night before the pageant I prayed and apologized for not being able to complete the “Simbang Gabi” this year. I also asked for God’s guidance and that I won’t trip when walking with my heels. I was one of the shortest candidates so I had to wear 8-inch heels,” Genevieve said.

Judges said although she did not win any special award, Genevieve was a constant high scorer in all categories. But it was her answer in the Q&A, which took up 50 percent of the overall scores for all who made it to the top five, that secured her spot.

To the question: “How could you promote the Filipina Beauty to the Expats of Dubai?” Genevieve said, “I can promote the Filipina Beauty to expats here. First of all, by telling them about our country. How hospitable we are, and how welcoming we are. Secondly, Filipino women with beauty and a heart can face all challenges and can triumph all obstacles and that is how you can see the true Filipina beauty which we are celebrating today through The Filipino Times Pinay Beauty Pageant. Thank you very much and Good evening to everyone.”

As the big winner for the night, Genevieve went home with gift packs from OraCare, Nandos, and LBC; a trip to Moscow, Russia for 4 days – 3 nights inclusive of flight, accommodation, transfer and city tour; and a cash prize of Dh5,000 from The Filipino Times. She also won a Philippine Airlines ticket DXB – MNL – DXB, and the crown and glory being the first ever TFT Pinay beauty 2016. 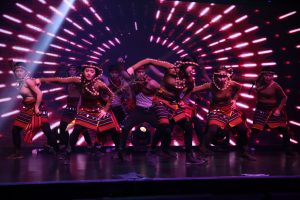 Intermission by a cultural group

Another big winner was Tathee, first runner up and a B. S. Psychology graduate, who also went home with three of the special prizes. The crowd favorite, bagged the Best in Swimsuit, Best in Evening Gown, and Ms. Photogenic.

As first runner up, Tathee received gift packs from OraCare, Nandos, and LBC, a trip to Armenia, for 4 days – 3 nights inclusive of flight, accommodation, transfer and city tour; a cash prize of Dh3,000 from The Filipino Times; a Philippine Airlines ticket DXB-MNL-DXB.

Tathee said that although she did not go home with the crown, she still feels like a champ for bringing home so many prizes.

Adormeo went home with gift packs from OraCare, Nando’s and LBC; a trip to Zanzibar, Tanzania for 4days-3nights inclusive of flight, accomodation, transfer and city tour; a cash prize of DH2,000 from The Filipino Times; plus Philippine Airlines Ticket DXB – MNL – DXB.

The night of the pageant was filled with glitz and glamour with Dubai’s Filipino community who’s who coming to witness the crowning of the very first TFT Pinay Beauty. A total of 14 contestants competed in different categories.

TFT Pinay Beauty 2016 was the most publicized competition that provides an opportunity for deserving Filipino ladies not only to be recognized for their beauty but also to be empowered in reaching their aspirations and dreams.

The event was made possible by the following sponsors: AFC Holidays, LBC, Magic Star Karaoke and Philippine Airlines, in partnership with Teng Roma Salon and The Medical City Dubai. Media partners were TAG 91.1 and TFC. Beverage partner was Al Ain Zero.