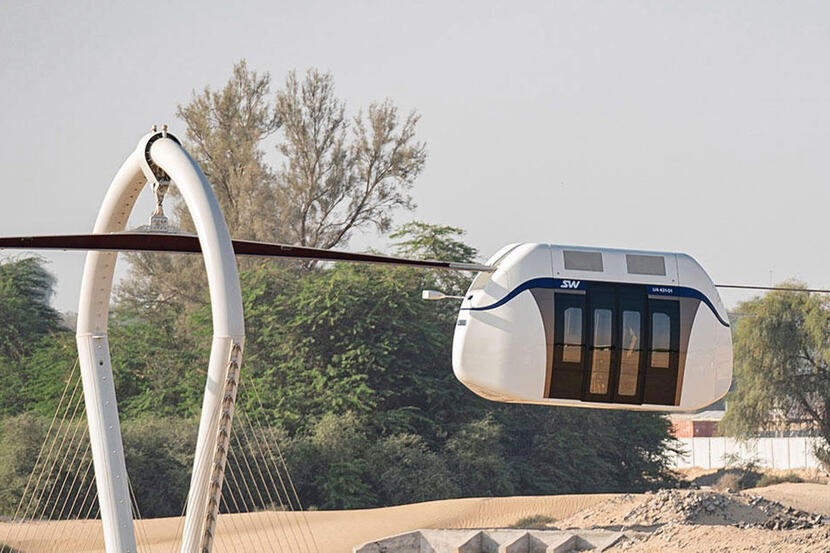 A high-speed rail passenger pod that can travel at the speed of 600 kilometres per hour and revolutionize passenger services was unveiled at the Sharjah Innovation and Technology Park (SITP).

The research at the $14 million (AED 51m) site is ongoing. A 20km test track for the high-speed “uFlash” pods will be developed as a working test track to run the sky pods was unveiled in January.

High-speed passenger pods on a track above the desert in Sharjah remains a working model for string-rail transport after the pods proved successful in wind-tunnel tests.

Designers remain confident that a longer track would allow further progress of the technology.

Dr Anatoli Unitsky, the Belarusian inventor of the system said, land and finances are required for building a longer test track. “It will cost $230m to build a 20km test track to take the pods up to 500kph.”

In Belarus, the company is registered as Unitsky String Technologies while in the UAE it is called USky and it pays ground rent to the SITP to continue its testing and hopes to raise funds through private financing to expand the project further.

The longest test track in Minsk is only 800 metres where pods have been travelling at a top speed of 108kph. (AW)

This website uses cookies to improve your experience while you navigate through the website. Out of these, the cookies that are categorized as necessary are stored on your browser as they are essential for the working of basic functionalities of the website. We also use third-party cookies that help us analyze and understand how you use this website. These cookies will be stored in your browser only with your consent. You also have the option to opt-out of these cookies. But opting out of some of these cookies may affect your browsing experience.
Necessary Always Enabled
Necessary cookies are absolutely essential for the website to function properly. These cookies ensure basic functionalities and security features of the website, anonymously.
Functional
Functional cookies help to perform certain functionalities like sharing the content of the website on social media platforms, collect feedbacks, and other third-party features.
Performance
Performance cookies are used to understand and analyze the key performance indexes of the website which helps in delivering a better user experience for the visitors.
Analytics
Analytical cookies are used to understand how visitors interact with the website. These cookies help provide information on metrics the number of visitors, bounce rate, traffic source, etc.
Advertisement
Advertisement cookies are used to provide visitors with relevant ads and marketing campaigns. These cookies track visitors across websites and collect information to provide customized ads.
Others
Other uncategorized cookies are those that are being analyzed and have not been classified into a category as yet.
SAVE & ACCEPT
92 shares
Close