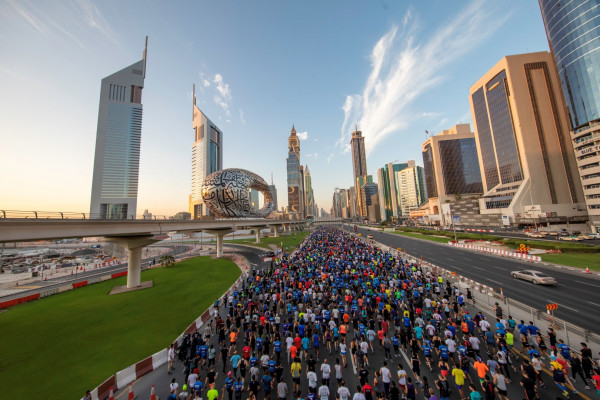 Dubai Run, one of the key highlights of the Dubai Fitness Challenge, is all set to return to Sheikh Zayed Road on Friday 26th November.

Registration for the highly anticipated event is now open for runners of all ages and abilities.

Tens of thousands of people are expected to take to the city’s running track whose 5km route is designed specifically for families and a 10 km route for recreational and professional runners.

The starting line commences near the spectacular Museum of the Future, where from runners will be able to see some of the emirate’s landmarks including Emirates Towers and Downtown Dubai before crossing the finishing line at Al Mustaqbal Street near the Dubai World Trade Centre.

The runners on the 10km route will also pass by The Dubai Mall, the Burj Khalifa and the Sheikh Mohammed Bin Rashid Boulevard.

Runners for the Dubai Run will get a limited-edition T-shirt made from sustainable fabric.

Ahmed Al Khaja, CEO of Dubai Festivals and Retail Establishment said that in the Dubai Run walkers or runners from an “eight-year-old to 80-year-old” can take part.

This website uses cookies to improve your experience while you navigate through the website. Out of these, the cookies that are categorized as necessary are stored on your browser as they are essential for the working of basic functionalities of the website. We also use third-party cookies that help us analyze and understand how you use this website. These cookies will be stored in your browser only with your consent. You also have the option to opt-out of these cookies. But opting out of some of these cookies may affect your browsing experience.
Necessary Always Enabled
Necessary cookies are absolutely essential for the website to function properly. These cookies ensure basic functionalities and security features of the website, anonymously.
Functional
Functional cookies help to perform certain functionalities like sharing the content of the website on social media platforms, collect feedbacks, and other third-party features.
Performance
Performance cookies are used to understand and analyze the key performance indexes of the website which helps in delivering a better user experience for the visitors.
Analytics
Analytical cookies are used to understand how visitors interact with the website. These cookies help provide information on metrics the number of visitors, bounce rate, traffic source, etc.
Advertisement
Advertisement cookies are used to provide visitors with relevant ads and marketing campaigns. These cookies track visitors across websites and collect information to provide customized ads.
Others
Other uncategorized cookies are those that are being analyzed and have not been classified into a category as yet.
SAVE & ACCEPT
137 shares
Close