Kapamilya actress Angel Locsin might be one of the biggest stars in the Philippines today, but it turns out that she was no exemption on the list of people who have once been bullied at school.

Locsin took to social media to share a screenshot of a private message sent to her by a former classmate who used to bully her back in high school.

The bully, whose name and photo was covered by Locsin, reached out to the actress to apologize for the way he/she treated her back in the days.

“Hi Angel, you probably don’t remember me but I used to not like you back in USTHS. I remember I bullied you before… I want to say I am sorry,” the message reads.

“I want you to know (while I am watching your movies in Netflix) that I am extremely amazed by how good an actress you are! Congratulations on how you have become a very good actress! I can probably say that perhaps, I am a fan now! Again, I apologize.”

Locsin then responded to the message by saying that it made her smile and that she accepts her bully’s apology.

Locsin also encouraged other bullies to have the guts to reach out to those who they have hurt in the past and apologize for what they did.

“So if you have the chance to apologize to someone you’ve hurt, take it. And if someone asks for your forgiveness, give it to them. In either case, if your efforts are sincere, you’ll never regret it,” she said. 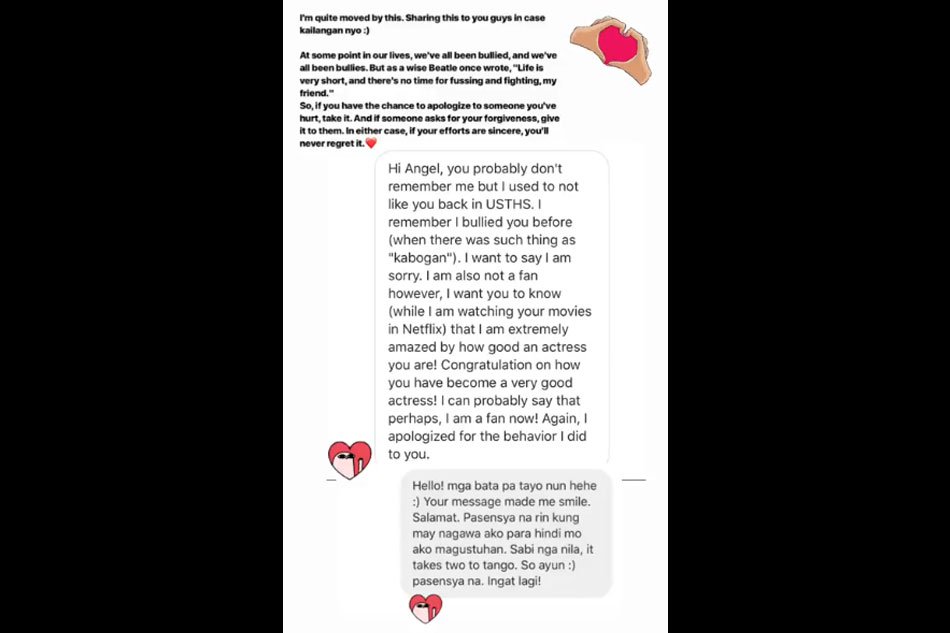