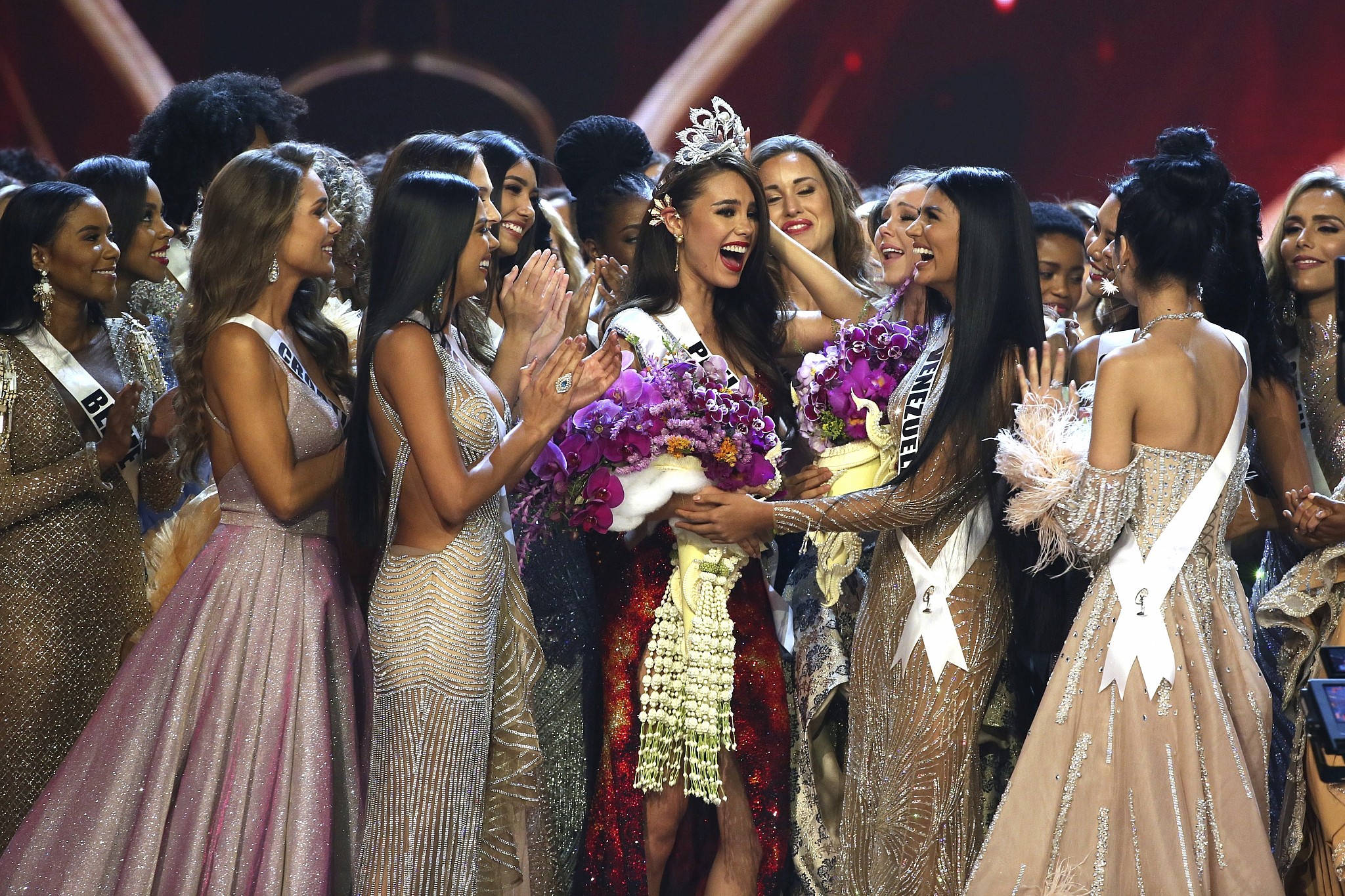 Contestants congratulate new Miss Universe Catriona Gray, center, from the Philippines during the final round of the 67th Miss Universe competition in Bangkok, Thailand on December 17, 2018.(AP/Gemunu Amarasinghe)

The Miss Universe organization has informed its national directors worldwide that they will now be accepting applications from married women, including those who have children.

Miss Universe Columbia is the first country to announce the news on social media.

The statement which came from the head of Miss Columbia Organization Natalie Ackermann mentioned that allowing “married women with children” to participate was part of a last minute change in the rules of the organization.

The announcement letter translates as: “Miss Universe Colombia Org* is allowed to inform public opinion that in the last hours the Miss Universe organization notified the decision to authorize the participation in the international contest of women who are or have been married, and/or have children or are in a state of gestation, between the ages of 18 and 28, as of the 72nd edition.”

‘Evolving with the changing times’

During Miriam Quiambao’s bout in the 48th Miss Universe pageant held in Trinidad and Tobago, the final question was “If Miss Universe were to become pregnant during her reign, should she be allowed to continue as Miss Universe?”

Quiambao answered that “it is a difficult situation to be in.” But “she should continue with her reign if she has been a good example to be a Miss universe, she has pursued all the goals that she had in the first place, I believe that she should continue,” added Quiambao.

Botswana’s Mpule Kwelagobe answered: “Personally I think a Miss Universe is a symbol of a woman as well, she’s celebrating her femininity and I believe that if she should fall pregnant it will not in any interrupt her duties. I believe as a woman she should celebrate her femininity.”

Here’s the file video of the Q&A portion courtesy of the Miss Universe organization:

The then 19-year-old triumphed over Miriam Quiambao of the Philippines (first runner-up) and Diana Nogueira of Spain (second runner-up) to win the title of Miss Universe 1999, a historic first time for her country.

In 2018, Angela Ponce from Spain became the first transgender woman to compete in the Miss Universe stage.

In 2019, Swe Zin Htet from Myanmar came out as a lesbian and became the first openly gay Miss Universe pageant contestant.

In 2021, Miss Universe Philippines Beatrice Luigi Gomez is the first openly bisexual woman contestant to have won the Philippine competition. She finished in the top 5 of the 71st Miss Universe pageant held in Israel.

With the latest minute decision  to change their rules, it is clear the MUO, headed by Paula Shugart (President) and Amy Emmerich (CEO), continues to “evolve with the changing of times to best represent and support women globally.”

As of writing, the Miss Universe Philippines organization has not yet released any public announcement regarding the changes.

The changes are set to be applied starting 2023.

This website uses cookies to improve your experience while you navigate through the website. Out of these, the cookies that are categorized as necessary are stored on your browser as they are essential for the working of basic functionalities of the website. We also use third-party cookies that help us analyze and understand how you use this website. These cookies will be stored in your browser only with your consent. You also have the option to opt-out of these cookies. But opting out of some of these cookies may affect your browsing experience.
Necessary Always Enabled
Necessary cookies are absolutely essential for the website to function properly. These cookies ensure basic functionalities and security features of the website, anonymously.
Functional
Functional cookies help to perform certain functionalities like sharing the content of the website on social media platforms, collect feedbacks, and other third-party features.
Performance
Performance cookies are used to understand and analyze the key performance indexes of the website which helps in delivering a better user experience for the visitors.
Analytics
Analytical cookies are used to understand how visitors interact with the website. These cookies help provide information on metrics the number of visitors, bounce rate, traffic source, etc.
Advertisement
Advertisement cookies are used to provide visitors with relevant ads and marketing campaigns. These cookies track visitors across websites and collect information to provide customized ads.
Others
Other uncategorized cookies are those that are being analyzed and have not been classified into a category as yet.
SAVE & ACCEPT
121 shares
Close