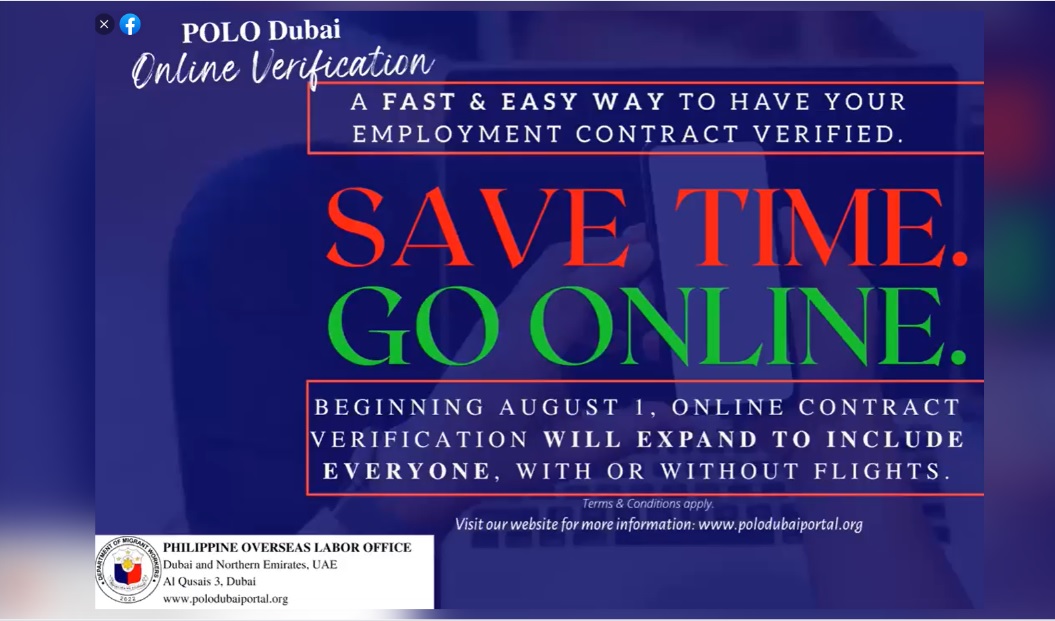 The Philippine Overseas Labor Office in Dubai will begin its mass rollout of the expanded online contract verification process starting August 1, merely a week after President Bongbong Marcos’ pronouncements to begin the automation of the said service across all posts worldwide.

POLO Dubai Labor Attache Atty. John Rio Bautista, in a town hall meeting, stated that there will be 500 slots available for the Online Submission System for Contract Verification every week through the link: https://www.polodubaiportal.org/form-page/

The agency will begin accepting 500 applications starting August 1 and will close by August 3 or if the 500 slots are filled earlier – whichever comes first. The next batch of 500 slots will reopen every Monday moving forward.

The approval process involving the online evaluation and review will take approximately one week. OFWs who get approved for the online contract verification will get their notification two weeks later.

After that, the schedule for appearance for payments and the release of verified contracts, according to POLO Dubai’s timetable, takes place three weeks later. For instance, the first batch of 500 applications from August 1-3, will get schedules by August 23-25.

Here’s the schedule as follows:

Unlike the pilot launch and transition phase conducted since June, OFWs will now be able to book their slots for contract verification with or without flights.

OFWs will also be allowed to send their authorized representative to pay and claim approved applications, for as long as they use the authorization and waiver form.

POLO Dubai has recorded an overall approval rate of 62% during its pilot and transition phase, totaling 1243 approved applications from OFWs, out of 2022 total applications received.

Atty. Bautista explained that the majority of the 38% of applications or 779 OFWs that got disapproved were those who submitted proper documentation, but didn’t fall under the flight schedule limitations during the test phase.

The Dubai Labor Attache expressed optimism that this disapproval rate will go lower, now that OFWs no longer need to have specified flight schedules in order to book their appointment online for contract verification.

Moving forward, POLO-Dubai and related agencies have already initiated talks with banks to include online payments as well to eliminate the need for personal appearances at the POLO grounds just to pay for the contract verification banks.

This website uses cookies to improve your experience while you navigate through the website. Out of these, the cookies that are categorized as necessary are stored on your browser as they are essential for the working of basic functionalities of the website. We also use third-party cookies that help us analyze and understand how you use this website. These cookies will be stored in your browser only with your consent. You also have the option to opt-out of these cookies. But opting out of some of these cookies may affect your browsing experience.
Necessary Always Enabled
Necessary cookies are absolutely essential for the website to function properly. These cookies ensure basic functionalities and security features of the website, anonymously.
Functional
Functional cookies help to perform certain functionalities like sharing the content of the website on social media platforms, collect feedbacks, and other third-party features.
Performance
Performance cookies are used to understand and analyze the key performance indexes of the website which helps in delivering a better user experience for the visitors.
Analytics
Analytical cookies are used to understand how visitors interact with the website. These cookies help provide information on metrics the number of visitors, bounce rate, traffic source, etc.
Advertisement
Advertisement cookies are used to provide visitors with relevant ads and marketing campaigns. These cookies track visitors across websites and collect information to provide customized ads.
Others
Other uncategorized cookies are those that are being analyzed and have not been classified into a category as yet.
SAVE & ACCEPT
253 shares
Close