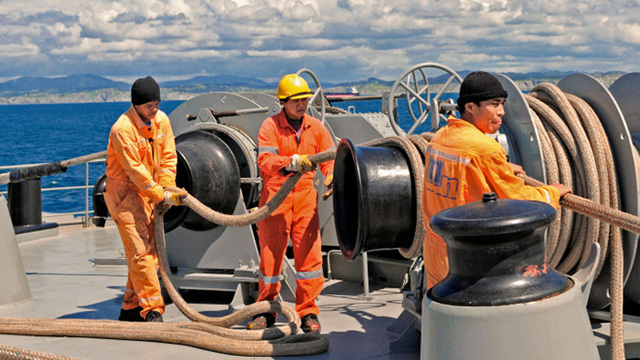 A tugboat sailing from Indonesia to the Philippines witnessed as many as 12 Filipino members of its crew testing positive for the dreaded COVID-19 virus, according to the Department of Health (DOH).

While 11 of them are being monitored in quarantine aboard the vessel in the port of Albay, the 12th person managed to sneak off the boat in his hometown of Butuan but is being kept under watch there by the authorities.

DOH spokesperson Undersecretary Maria Rosario Vergeire stated on July 20 stated that eight other sailors among the 20-strong all-Filipino crew however tested negative for the disease.

The vessel is now being monitored by the Coast Guard with no one allowed to disembark or enter, she told media online, adding that any of the crew becoming symptomatic would be brought to the nearest hospital there.

Meanwhile, the lone crew member — who had disregarded orders to stay aboard the vessel and had instead gone home to his family – has been isolated, while the driver of the public transport he took, a helper, and all his relatives have been quarantined by the local government, she said.

READ ON: Duterte includes Indonesia in PH travel ban due to Delta variant

The DOH sent 5 samples – taken from the 11 COVID-19 tugboat crew — to the Philippine Genome Center for sequencing to determine if they are infected with a foreign variant, Vergeire added.

The vessel’s point of origin – Indonesia — is the current epicenter of COVID-19 in Southeast Asia, where the number of cases have risen in the wake of the more transmissible Delta variant. (AW)

This website uses cookies to improve your experience while you navigate through the website. Out of these, the cookies that are categorized as necessary are stored on your browser as they are essential for the working of basic functionalities of the website. We also use third-party cookies that help us analyze and understand how you use this website. These cookies will be stored in your browser only with your consent. You also have the option to opt-out of these cookies. But opting out of some of these cookies may affect your browsing experience.
Necessary Always Enabled
Necessary cookies are absolutely essential for the website to function properly. These cookies ensure basic functionalities and security features of the website, anonymously.
Functional
Functional cookies help to perform certain functionalities like sharing the content of the website on social media platforms, collect feedbacks, and other third-party features.
Performance
Performance cookies are used to understand and analyze the key performance indexes of the website which helps in delivering a better user experience for the visitors.
Analytics
Analytical cookies are used to understand how visitors interact with the website. These cookies help provide information on metrics the number of visitors, bounce rate, traffic source, etc.
Advertisement
Advertisement cookies are used to provide visitors with relevant ads and marketing campaigns. These cookies track visitors across websites and collect information to provide customized ads.
Others
Other uncategorized cookies are those that are being analyzed and have not been classified into a category as yet.
SAVE & ACCEPT
95 shares
Close