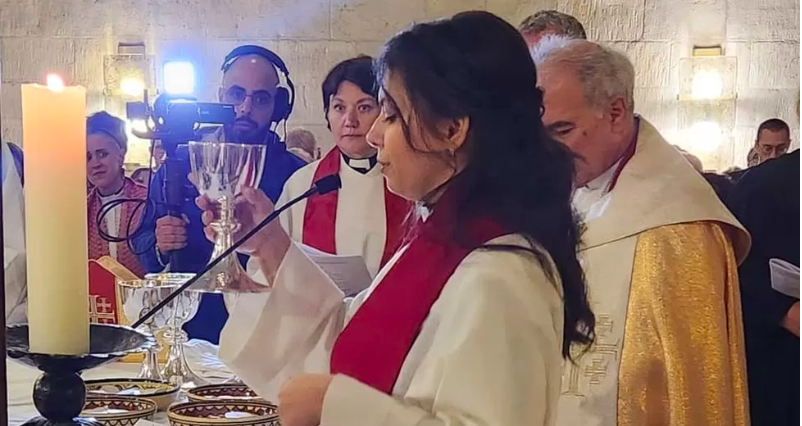 Sally Azar, a Palestinian coming from Jerusalem, became the first woman pastor of the Holy Land—a term referring to a territory roughly corresponding to the modern State of Israel and Palestine—after she was ordained at an event held at the Lutheran church in the Old City, attended by hundreds of international well-wishers.

“I hope that many girls and women will know this is possible and that other women in other churches will join us. I know it will take a long time, but I think it could be exciting if this changes in Palestine,” Reverend Azar said.

Christians are a minority in Israel and Jordan, and  Palestinian Territories and most of them belong to the Latin Catholic Churches and the Greek Orthodox, which do not allow women to become priests.

However, the ordination of women has been happening in a growing number of Protestant Churches over the past few decades.

“Everywhere where you have a patriarchal society and culture, this is a major step,” says the recently retired Archbishop of the Church of Sweden, Antje Jackelen.

“Since I’ve been ordained for over 40 years, I’ve met many people who didn’t think it was possible. But now they’ve seen women actually serving as pastors, as bishops, as archbishops, we know it works, and we know that it’s actually in accord with the Bible.”

As for the Middle East, churches in Lebanon and Syria have already ordained women, while at least one Palestinian woman has been known to serve in the US.

Her father, Bishop Sani Azar, conferred holy order on Ms Azar. She said that though his father’s example was a great inspiration, she never felt pressured into studying theology.

In her pastoral role, she will take on different tasks, such as leading spiritual services and conducting bible classes for English-speaking congregations in both Jerusalem and the occupied West Bank.

This website uses cookies to improve your experience while you navigate through the website. Out of these, the cookies that are categorized as necessary are stored on your browser as they are essential for the working of basic functionalities of the website. We also use third-party cookies that help us analyze and understand how you use this website. These cookies will be stored in your browser only with your consent. You also have the option to opt-out of these cookies. But opting out of some of these cookies may affect your browsing experience.
Necessary Always Enabled
Necessary cookies are absolutely essential for the website to function properly. These cookies ensure basic functionalities and security features of the website, anonymously.
Functional
Functional cookies help to perform certain functionalities like sharing the content of the website on social media platforms, collect feedbacks, and other third-party features.
Performance
Performance cookies are used to understand and analyze the key performance indexes of the website which helps in delivering a better user experience for the visitors.
Analytics
Analytical cookies are used to understand how visitors interact with the website. These cookies help provide information on metrics the number of visitors, bounce rate, traffic source, etc.
Advertisement
Advertisement cookies are used to provide visitors with relevant ads and marketing campaigns. These cookies track visitors across websites and collect information to provide customized ads.
Others
Other uncategorized cookies are those that are being analyzed and have not been classified into a category as yet.
SAVE & ACCEPT
99 shares
Close