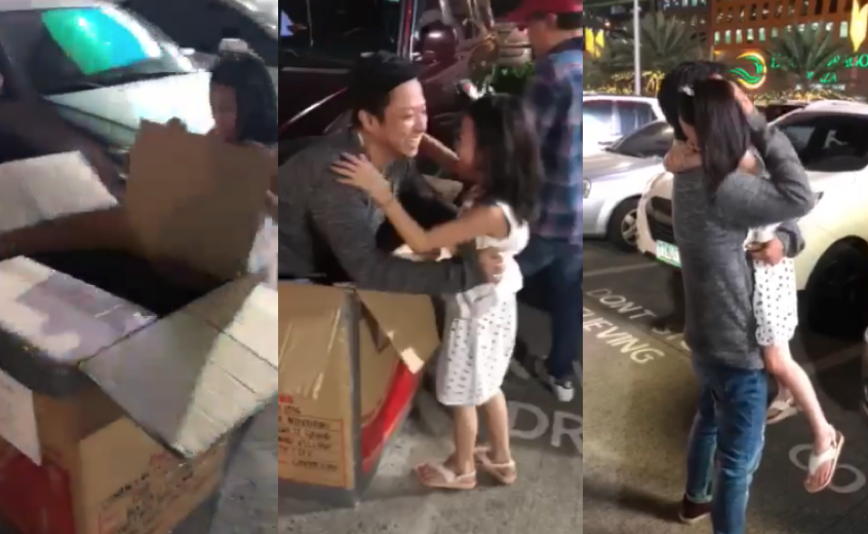 While our little ones’ are still excited over what Santa had left for them in their stockings hanging on the banister, many children would rather sit near the window pane wondering if their moms or dads working abroad would come home for Christmas.

In the case of Saliah Navarro, daughter of an overseas Filipino worker (OFW) in Dubai, she had only one wish for Christmas, and that’s to see his dear father sharing the table with them during this year’s noche buena. Little did she know that her father had been planning to surprise her. It was a simple plan that her dad did not expect to be an emotional one.

The Filipino Times chanced upon a video online of her dad’s surprise last December 7 that was uploaded by Marco Ceasar, Saliah’s uncle.

In the video, her uncle Marco can be heard instructing her to open a huge balikbayan box that lies unopened in a parking lot.

As Saliah uncovers what’s inside, she finds the best Christmas gift that she could ever receive—her dad who flew all the way from Dubai, UAE just to be with her and their entire family.

It was not only a magical treat for the child but an emotional reunion between the child and her father.

“Surprise, anak,” Martin shouted with glee. At that moment, Saliah was not able to hold back her tears while hugging her father tight.

“Opo,” Saliah uttered with sobs while clinging to her father.