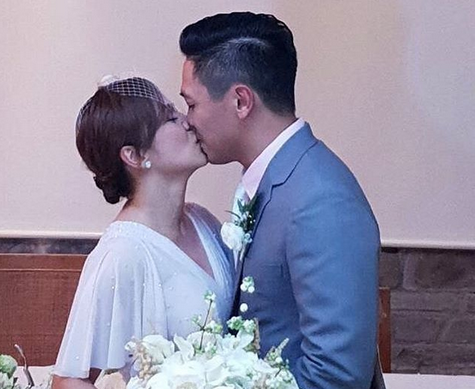 Actress Nikki Valdez found her second chance at love, marrying her non-showbiz partner Luis Garcia over the weekend in Hong Kong and thanking God for giving her “another chance to love.

Through a series of Instagram posts, the 35-year-old actress shared some photos of the ceremony”, which took place on August 18.

“We did it! I love you,” Valdez captioned one of the posts while tagging her husband.

Another photo shows Valdez and Garcia joined by Olivia Ysabelle, the former’s daughter from her first marriage.

“Cannot ask for anything more. I love you, Jesus. Thank you for giving me the best day of my life,” Valdez said of her wedding day.

Cannot ask for anything more. ??? I love you, Jesus. Thank you for giving me the best day of my life. Official photos from @niceprintphoto coming soon! ?#TheGarciasYouMeInfinity

Aside from that, Valdez also posted a photo of her in her wedding gown in the streets of Hong Kong as she thanked the Lord for giving her “another chance to love”.

“Life always offers a second chance that is called tomorrow.” ? I love you, Jesus. Thank you for giving me another chance to love. #TheGarciasYouMeInfinity

For his part, Garcia posted a photo of him and his new wife with the caption, “I love you Mrs. Garcia”.

Valdez first got married to Filipino-Canadian Christopher Lina in 2007 and moved to Toronto, Canada afterwards. She and her former husband, however, got separated after three years.