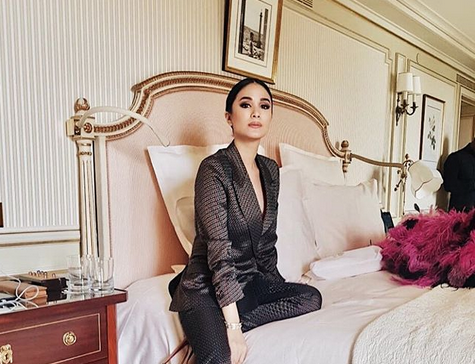 Kris Aquino might have bagged a role in the film adaptation of the critically-acclaimed novel “Crazy Rich Asians”, but it was Heart Evangelista who was dubbed by international fashion magazine Harper’s Bazaar as the crazy rich Asian in real life.

Kevin Kwan, the author of the book, recognized Evangelista as one of the four women who exemplify the luxurious lifestyle in Asia.

At the beginning of the video, Kwan introduced the viewers to the secret glamorous world of Asians “who spend millions of dollars a year on the finest things in life.”

“Only about 2,000 women in the world can afford to dress this way,” Kwan said referring to haute couture dresses that can cost up to millions of dollars.

“Heart Evangelista, she is really the darling of the Philippines. She is one of the most acclaimed actresses. She is also a really gifted artist, she has had amazing museum shows in the Philippines of her paintings,” Kwan spoke of Evangelista in the video.

Kwan also praised Evangelista for her customized painted bags, which, according to the Filipino celebrity, all began when she tried to remove a cheese stain from her orange lizard-skin Birkin bag.

The video also showed the women’s love for high fashion and haute couture and why they spend hefty amounts of money for something they consider to be “art”.

“I had the honor of being featured alongside some of the most incredible and stylish Asian icons. I am beyond grateful to Kevin and the entire Harpers team for being such a dream to work with! I’m so incredibly proud of this project and would love for you to see it too!” she wrote on Instagram.

I woke up to one of the most amazing features in my life! My last trip to Paris was a very special one because not only was I there for couture week but I had been invited by @kevinkwanbooks who has now become a dear friend! He was doing a special ‘Crazy Rich Couture’ feature for Harpers Bazaar US and asked me if I would be interested in being a part of it. I had the honor of being featured alongside some of the most incredible and stylish Asian icons. I am beyond grateful to Kevin and the entire Harpers team for being such a dream to work with! I’m so incredibly proud of this project and would love for you to see it too! Grab the September issue of Harpers Bazaar US or click the link in my bio! ❤️ @harpersbazaarus

Evangelista previously revealed in an interview with GMA that she auditioned for “Crazy Rich Asians” and “almost got the part”.

Evangelista added that it was Kevin Kwan himself, the author of the Crazy Rich Asians book, who told her that she almost bagged the role she auditioned for.

Taking in the beautiful designs at the @schiaparelli show…?