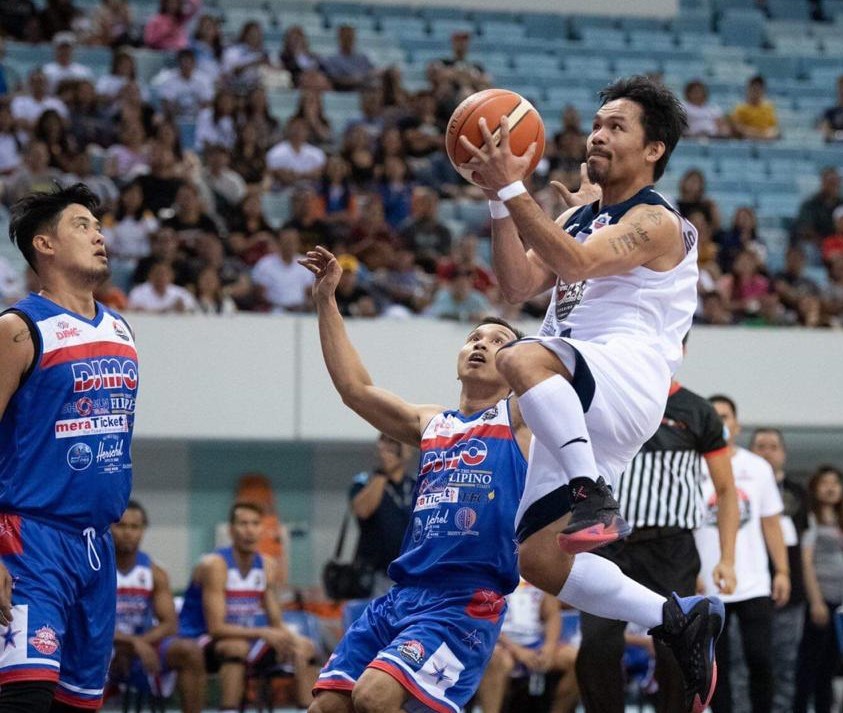 The 40-year-old Pacquiao, the only eight-division world champion in boxing history, showcased his scoring prowess, firing a game-high 35 points on an array of outside jumpers and daring drives much to the delight of his Kababayans, who trooped their way to the sprawling Hamdan Sports Complex along  Emirates Road.

But the Dubai All Stars-DJMC, composed of former pro and collegiate Filipino cagers who are now based in UAE, had other plans as they played all out right from the opening tip to take the opener of the exhibition matches serving as fitting appetizers for regular MPBL matches.

Former MBA star Chris De Jesus led the hosts with 17 points while former University of the East standout Arnold Booker and Perpetual Help product Chris Elopre tallied 16 points apiece as they took turns in the extra five-minute period that salvaged what seemed to be a blown opportunity in regulation.

It was Pacquiao, as expected, who commanded much of the spotlight in the opening day of the league’s breakthrough foray overseas made possible by the Dubai Sports Council and Hamdan Sports Complex, with Happy Holidays, Herschel, Blue Eyes, King’s Medical Center, Shogun Global and Transform as support sponsors. The Filipino Times was the media partner.

“It’s always a humbling experience to play in front of my Kababayans,” said Pacquiao, who personally offered US$3,000 reward to the winning team. “We came here to entertain them more than anything and I hope we were able to do so. I’m very thankful for their warm welcome and the to the government of Dubai for their great hospitality.”

For his part, Dunstan Rozario, Chairman of DJMC Events, the main organizer of the two-day hoopfest, said:  “Earlier, I told them to just enjoy this special moment of playing against Senator Manny Pacquiao. But when the opportunity presented itself, the guys gladly took it. This victory made the hosting sweeter for us.”

Playing inspired with Narvacan, Ilocos Sur Mayor Chavit Singson and a handful of Philippine lawmakers in attendance, the Filipino boxing icon went on a scoring binge in the first period with 12 points, spiked by a pair of triples, helping the MPBL executives overcome a jittery start and even take a 26-23 lead.

But the Dubai All Stars-DJMC refused to give in and held their ground on both ends, taking control in the middle quarters and putting themselves on the cusp of a stunner with an 89-85 lead off De Jesus’ split with 29.5 ticks to go in regulation.

The Dubai All Stars botched their final two attempts in the closing seconds, but quickly regrouped in overtime, with Elopre hitting five quick points and De Jesus scoring an unmolested lay-up that negated Bobby Pacquiao’s jumper for a 97-92 lead.

Manny Pacquiao split his charities then Oreta scored the next three points as the MPBL Executives kept breathing down the Dubai All Stars-DJMC’ neck, 96-97, setting the stage for a cardiac finish.

However, Oreta turned from hero to zero as he muffed a point-blank attempt and turned the ball over, leaving them with no recourse but to foul the Dubai All Stars-DJMC, who canned two of their four free throw attempts in the last 15 seconds.

The MPBL Executives had one final chance to force another overtime, but Rob Wainwright’s last gasp attempt came up short, enabled the Dubai All Stars-DJMC to escape with the big victory.

Robles finished with 17 points, while Yee wound up with 16 points and 10 rebounds for the Cocolife-backed Tigers, the MPBL Datu Cup South champion and losing national finalist to North division titlist San Juan Knights who jacked up their pacesetting win-loss record to 14-2 in the Lakan Cup.

The Athletics saw their own three-win run come to a halt and slid to 9-5. They have a chance to bounce back as they take on the struggling Imus-Khaleb Shawarma Bandera (3-11) on Saturday night at 8 p.m.