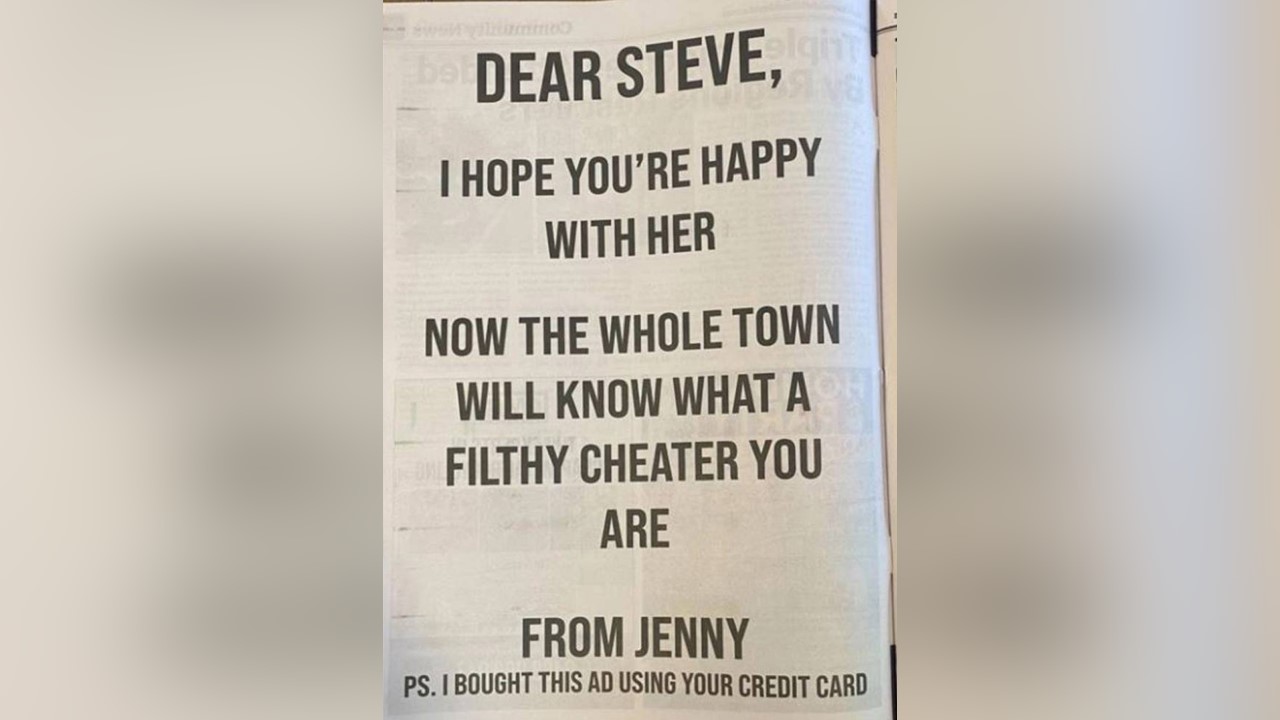 An Australian wife got an advertisement published in the newspaper to call out ‘cheating’ husband.

The incident was reported from the town of Mackay, Queensland, where one man named Steve cheated on his partner Jenny following which the woman booked a full-page advertisement in a local newspaper to shame her husband.

RELATED STORY: Husband seeks AED 50,000 from wife in UAE after being acquitted of stealing her cars

Jenny bought a full-page ad in the local paper, Mackay and Whitsunday Life, to make sure the whole town knew about Steve’s affair and the which was published in print and in large capital letters, reads: “Dear Steve, I hope you are happy with her… Now the whole town will know what a filthy cheater you are.” “P.S. I bought this ad using your credit card.”

The newspaper is read by more than 50,000 people in the tropical tourist area next to the Great Barrier Reef and it said it had been inundated with messages from readers about the ad that appeared on page four.

READ ON: Abusive husband jailed after beating up curious wife who asked why he uses phone secretly at midnight

Curious locals wanted more information about the small-town scandal, but Mackay and Whitsunday Life refused to reveal any details about Jenny while clarifying that they had not charged the credit card.

“We don’t know who Steve is, but he was clearly very bad,” the paper said.

This website uses cookies to improve your experience while you navigate through the website. Out of these, the cookies that are categorized as necessary are stored on your browser as they are essential for the working of basic functionalities of the website. We also use third-party cookies that help us analyze and understand how you use this website. These cookies will be stored in your browser only with your consent. You also have the option to opt-out of these cookies. But opting out of some of these cookies may affect your browsing experience.
Necessary Always Enabled
Necessary cookies are absolutely essential for the website to function properly. These cookies ensure basic functionalities and security features of the website, anonymously.
Functional
Functional cookies help to perform certain functionalities like sharing the content of the website on social media platforms, collect feedbacks, and other third-party features.
Performance
Performance cookies are used to understand and analyze the key performance indexes of the website which helps in delivering a better user experience for the visitors.
Analytics
Analytical cookies are used to understand how visitors interact with the website. These cookies help provide information on metrics the number of visitors, bounce rate, traffic source, etc.
Advertisement
Advertisement cookies are used to provide visitors with relevant ads and marketing campaigns. These cookies track visitors across websites and collect information to provide customized ads.
Others
Other uncategorized cookies are those that are being analyzed and have not been classified into a category as yet.
SAVE & ACCEPT
81 shares
Close