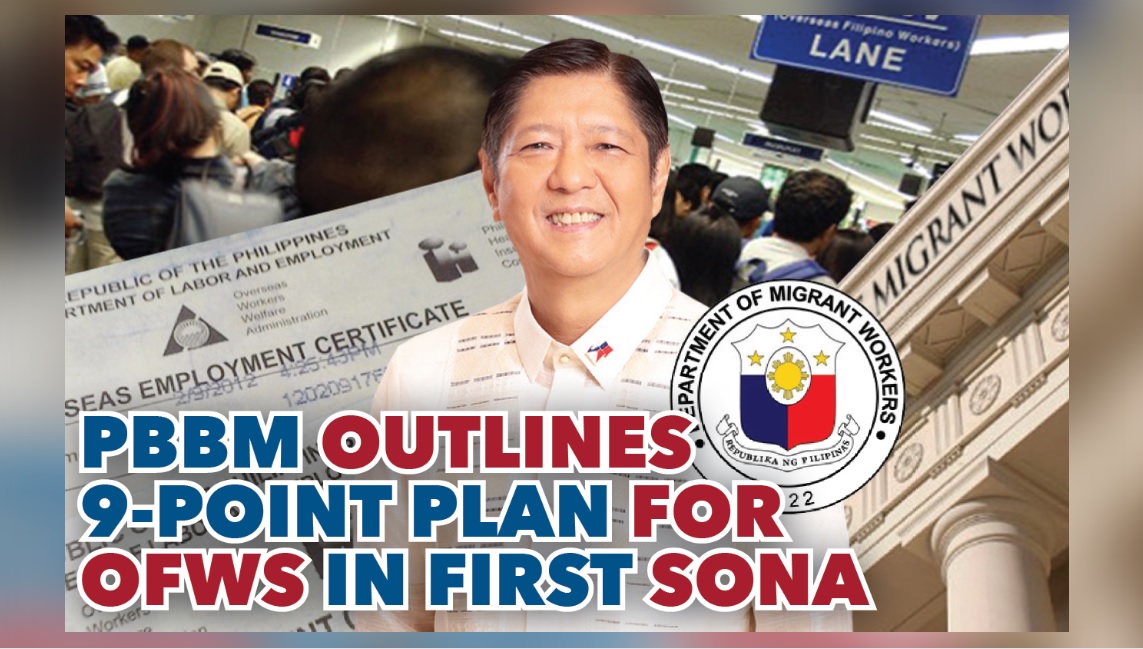 President Bongbong Marcos allotted no less than six minutes of his first-ever State of the Nation Address (SONA) to outline his plans and vision to help overseas Filipino workers in his next six years in office.

With the newly-launched Department of Migrant Workers (DMW) as his anchor point, Marcos assured that OFWs will be well taken care of under his administration.

Here’s Marcos’ 9-point plan as outlined during his first SONA:

Marcos empathized with the plight of OFWs, and assured that the Philippine government, through the DMW and other relevant agencies, will provide job opportunities, assure that OFWs’ skills match their chosen profession, ensure fair wage and humane treatment from overseas employers, and care for the children they leave behind back home.

Digitization of Contract Verification and OEC

One of the most notable points that Marcos raised in his SONA was to remove red tape through passage of digitalization. He tasked the DMW to collaborate with the Department of Information and Communications Technology (DICT), most especially in the process of contract verification for OFWs as well as the secure issuance of Overseas Employment Certificates (OECs) which Marcos said will soon be accessible through smartphones.

“Gagawin natin ito sa pamamagitan ng pag-aalis ng red tape sa sistema ng pagsusulong ng digital empowerment. We shall automate the verification of contracts and issue secure Overseas Employment Certifications (OEC) that you can keep on your smartphone. I call on the Department of Migrant Workers and the DICT to make this a top priority,” said Marcos.

Labor Attache Atty. John Rio Bautista of the POLO-OWWA in Dubai said that this is a significant step that would help OFWs spend less time on manual verifications and processes. He added that their office would be more optimized as well through this digitalization drive.

Elmer Casao, who was among the virtual OFW attendees of the SONA, stated that Marcos’ pronouncements reflect the sentiments of OFWs who wish to find newer, more efficient ways to get their papers processed whenever they visit the embassy or the consulate in their respective areas.

“I was actually inspired hearing it first-hand from His Excellency Ferdinand R. Marcos Jr. in his first SONA which includes digitization of employment verification and making OECs available via smartphones because this reflects the sentiments of OFWs. I am sure will ease the burden of OFWs in the appointment and processing of their applications.

The past few years witness the exodus of many overseas Filipinos back to the Philippines – with 2.2 million OFWs repatriated as of June 2022, according to Statista.

PBBM tasked the Department of Foreign Affairs (DFA) to work with the DMW to find ways and means to engage with diplomatic posts and open more job opportunities overseas to help those who lost their jobs during the pandemic years.

Marcos also intends to streamline the OFW recruitment process, which usually takes several months before a Filipino is given the green light to head overseas to begin her/his journey as an OFW.

International emergencies such as conflicts in Ukraine, Myanmar, and Sri Lanka, as well as the ongoing fight against human trafficking and foreign employer abuse, witnessed an uptick in repatriation in the recent years.

Warpeace Arnold, who also participated in the virtual SONA, praised this move that will consolidate all government efforts to help OFWs who are in dire straits to head home.

The Philippine President also added that they have allocated the social media page of the DMW and will launch a specific hotline that will cater to emergency situations of OFWs. He also added that instead of the relative of the OFW who constantly asks for updates, as is the case in the previous years, his administration’s government employees will be the ones reaching out to the families.

Art Los Baños, a PR professional for over 20 years in Dubai hopes that this will help families of OFWs to get the assistance and be assured that their loved one is safe.

“Good news for Overseas Filipino Workers (OFWs) and their respective families. The president reiterated the availability of the One Repatriation Center which was launched by the Department of Migrant Workers (DMW) last July 20. The center will provide immediate response to repatriation, welfare, and other concerns of distressed OFWs. Anyone can call the One Repat-DMW hotline ‘1-348’ where a team of case officers, welfare officers, and medical professionals will assist them. OFWs can also email to [email protected].

He hopes that the DMW Sec. Ople could also mull the creation of a “Global Emergency Response and Crisis Center” that will be based in the UAE as an overseas office that could streamline services covering Europe, Africa and the Middle East (EMEA) which is currently the home of over 3 million OFWs.

“EMEA will always be a hotspot for the department. It will make a lot of sense and practicality to have the center in the UAE where there are two international aviaton hubs. Dubai and Abu Dhabi are 8 flight hours to London and Johannesburg, 7 flight hours to Milan, 5.5 flight hours to Kenya, 4 flight hours to Cairo and Tel Aviv, 3 flight hours to Jeddah and Amman, 2 flight hours to Riyadh, 1.5 flight hours to Kuwait, and 1 flight hour to Doha. This proposal is related to one of the additional functions of the Office of Undersecretary for Foreign Employment and Welfare Services, which is to “provide prompt and appropriate response to global emergencies or crisis situations affecting OFWs, and members of their families.” This is found in Section 9 of Republic Act No. 11641 creating the DMW,” explained Los Baños.

Marcos likewise tasked DMW Sec. Ople to head to Saudi Arabia in the hopes of talking to local officials for the reopening the deployment of overseas Filipino workers in the country. Saudi Arabia is currently home to at least 1.6 million Filipinos, according to statistics from Global Media Insight.

Marcos likewise assured OFWs’ that the children they left behind will be given quality education at schools of good standing. He highlighted that these children will be taught in key areas such as the arts, culture, financial literacy, mental wellness, and sports.

Nedie Toralba, a single mom working for over 23 years in Abu Dhabi said that the SONA reflects Marcos’ support for modern-day heroes, especially since he highlighted his plans for OFWs that will be coursed through the DMW.

PBBM concluded by thanking former President Rodrigo Duterte as well as the legislators, who paved the way for the DMW to come to fruition as an agency that the Marcos administration enjoys today: “You OFWs represent the fighting faith of the Filipinos as a nation and as a people. Let us transform your overseas journey into inspirational stories for all time.”

He added: “Thanks to you, our dear legislators, and of course, to the man, every OFW now refers to as their “Tatay”, President Rodrigo Duterte. You passed the law that created this new home for our OFWs.”

This website uses cookies to improve your experience while you navigate through the website. Out of these, the cookies that are categorized as necessary are stored on your browser as they are essential for the working of basic functionalities of the website. We also use third-party cookies that help us analyze and understand how you use this website. These cookies will be stored in your browser only with your consent. You also have the option to opt-out of these cookies. But opting out of some of these cookies may affect your browsing experience.
Necessary Always Enabled
Necessary cookies are absolutely essential for the website to function properly. These cookies ensure basic functionalities and security features of the website, anonymously.
Functional
Functional cookies help to perform certain functionalities like sharing the content of the website on social media platforms, collect feedbacks, and other third-party features.
Performance
Performance cookies are used to understand and analyze the key performance indexes of the website which helps in delivering a better user experience for the visitors.
Analytics
Analytical cookies are used to understand how visitors interact with the website. These cookies help provide information on metrics the number of visitors, bounce rate, traffic source, etc.
Advertisement
Advertisement cookies are used to provide visitors with relevant ads and marketing campaigns. These cookies track visitors across websites and collect information to provide customized ads.
Others
Other uncategorized cookies are those that are being analyzed and have not been classified into a category as yet.
SAVE & ACCEPT
293 shares
Close