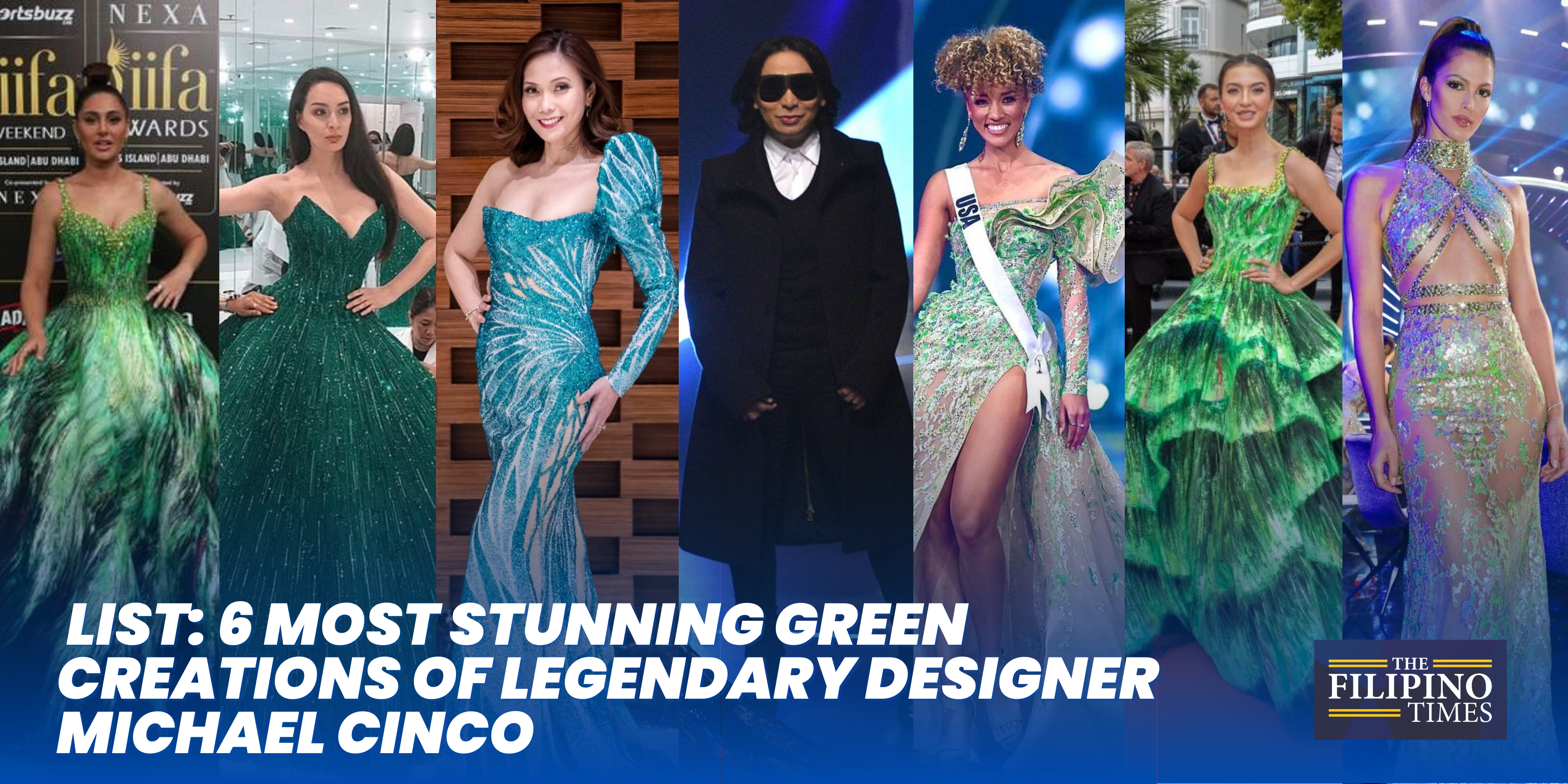 His legendary, impalpable style that spouses the Middle East’s splendor has placed Filipino fashion design on the map. Thanks to his incomparable passion for haute couture, Cinco has become one of the leading international Filipino designers.

Two of the many feathers added to his cap were The Filipino Times’ Rizal Award and the Fashion Designer of the Year in 2015— accolades that Cinco said “gave me the vision to make my home country, the Philippines, proud”.

With the calming hue of evergreen fog and Pantone’s nature-inspired color palettes being the color of the year 2022, here’s a rundown of some of the most gorgeous green creations of Michael Cinco to date:

Miss Universe 2015 Pia Wurtzbach was a sight to behold during her farewell walk as Miss Universe, as she donned that beautiful royal blue ball gown by Michael Cinco. This gown was part of his 2017 fall/winter couture collection, called The Impalpable Dream of The Maharaja: The Lapiz Lazuli Collection.

Apparently, this masterpiece had a twin—and it came in emerald green, which was worn by world-renowned opera singer Zarina Altynbayeva for a concert performance at the EXPO Congress Centre in Astana, Kazakhstan in 2017.

The opera singer was greatly astonished at how it made her look like a fairytale princess! So, which version of this iconic gown do you fancy more? 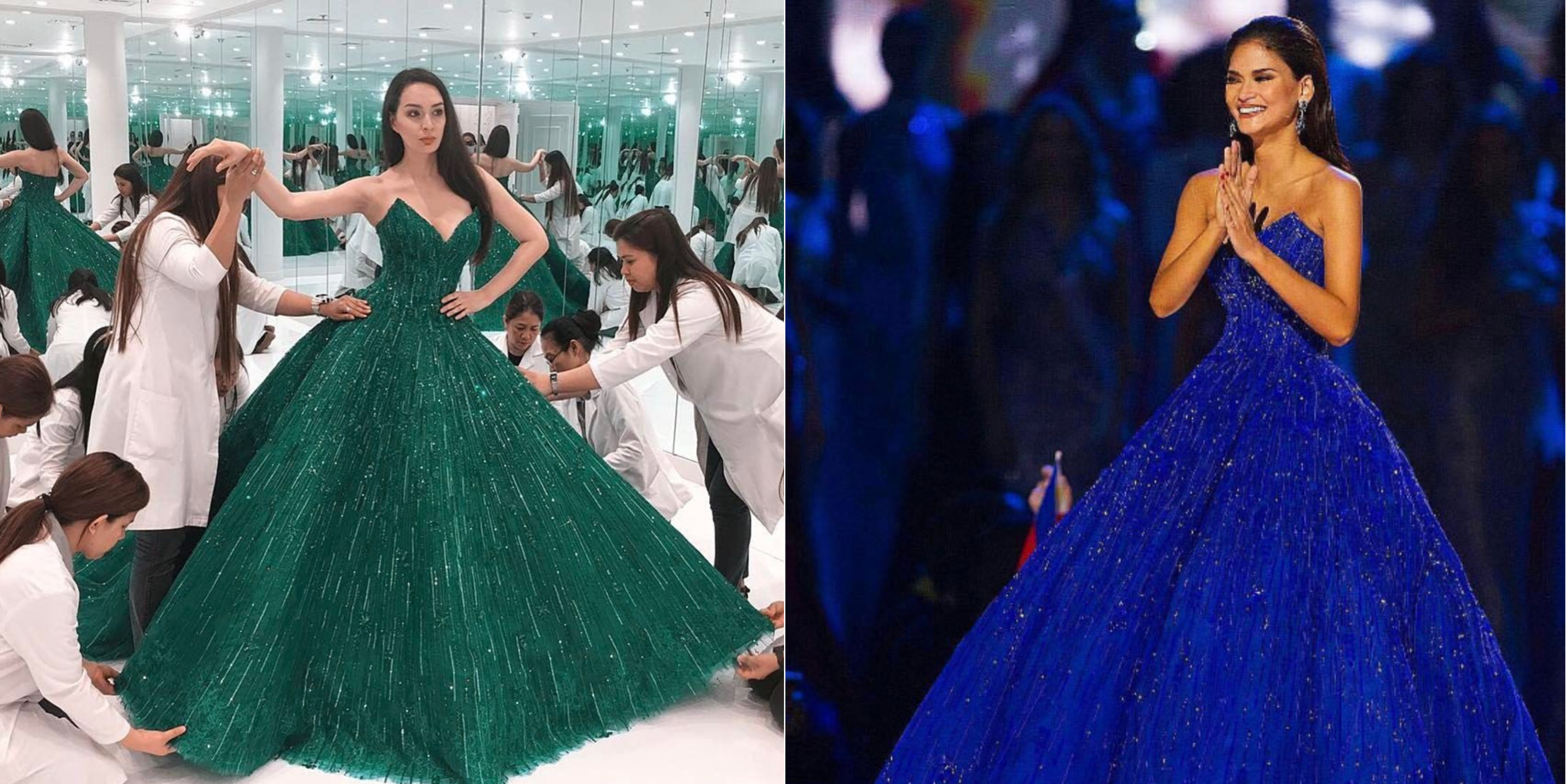 Indonesian superstar Raline Shah captivated the crowd during this year’s Cannes Film Festival, as she elegantly hit the red carpet with a stunning green couture creation by Michael Cinco.

This glow-in-the-dark green ball gown featured a beautifully hand-painted motif inspired by the wonders of the Northern Lights. He collaborated with Dubai-based young Filipino digital artists, who used luminescent paints, to bring his out-of-this-world vision to life.

No wonder this jaw-dropping gown reaped comments from amazed netizens!

What better way to receive the highest recognition of the Philippine government to Filipino individuals and organizations overseas than with an elegant creation by legendary fashion designer Michael Cinco — who was also a recipient of the same award in 2014.

The sultry style of the gown flatters the body but one that’s regal and formal and evokes the Filipino culture. It had a semi-sweetheart neckline accentuated with a single butterfly sleeve.

With intricate waves of structured mosaic patterns, the ensemble was bejeweled with glittering crystals that cascaded down the dress. “This mermaid gown was made with full Swarovski crystals, with a dramatic terno sleeve on the left side,” said Cinco. 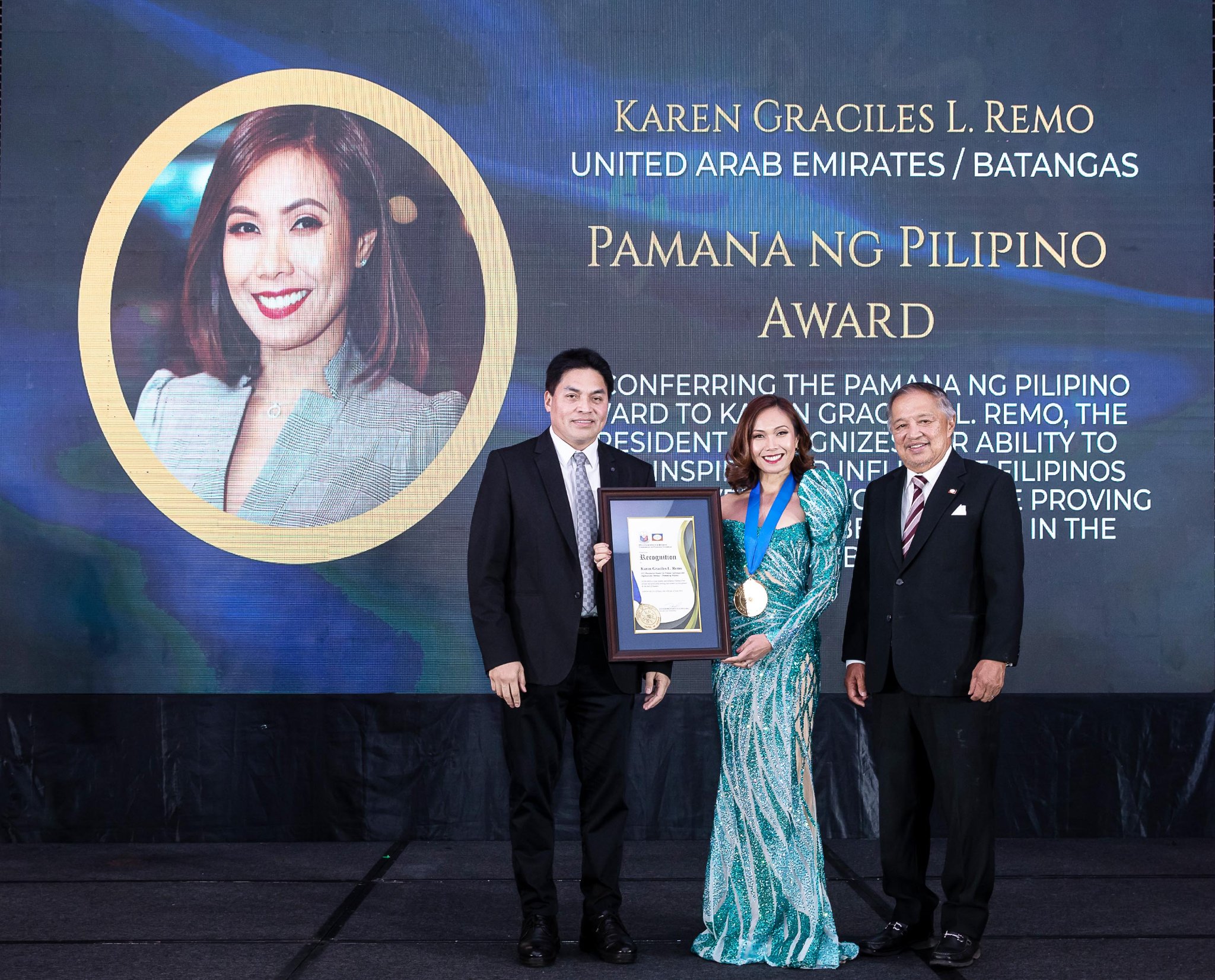 From the ensembles donned by Kriti Sanon, Divya Khosla Kumar to Urvashi Rautela, the exquisite creations of Michael Cinco absolutely dominated the green carpet at IIFA Awards 2022. But what captivated many was the green glow-in-the-dark gown worn by Nargis Fakhri.

Oozing with extraordinary glam, Fakhri made a striking appearance in this billowing hand-painted gown with a plunging neckline and fully-jeweled sleeves. She styled the voluminous outfit with an edgy top hair bun and minimal accessories. 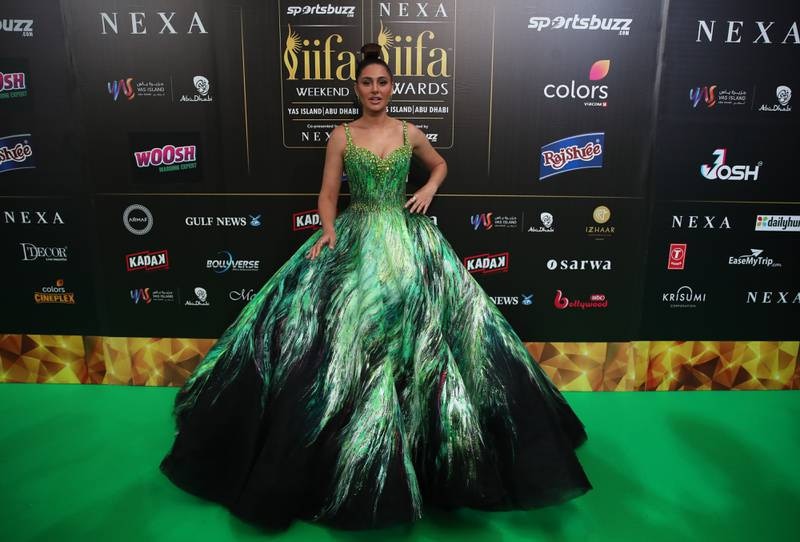 Michael Cinco isn’t only a highly sought-after designer by Hollywood A-listers but also by the most beautiful women in the universe. His impalpable masterpieces are always a head-turner at Miss Universe.

During the Miss Universe 2021, the gown worn by Elle Smith during the evening gown preliminary competition was designed by Michael Cinco. It was an intricately detailed green asymmetrical gown replete with a thigh-high slit.

Smith, the second woman from Kentucky to win Miss USA, made it to the top 10 of the prestigious beauty pageant.

Miss Universe 2016 Iris Mittenaire has made Michael Cinco’s creations her constant at beauty pageant events. Among the most recent gowns she had worn was during the Miss Universe 2021, where she took part as host and member of the selection committee.

During her stint at the pageant, the French beauty queen dazzled the crowd with a fairytale-esque, body-fitting gown which was part of Michael Cinco’s The Impalpable Dream of Gustav Klimt couture collection.

It can be recalled that the beauty queen made her final walk at Miss Universe in 2017, wearing the now iconic red ombre gown by Michael Cinco. 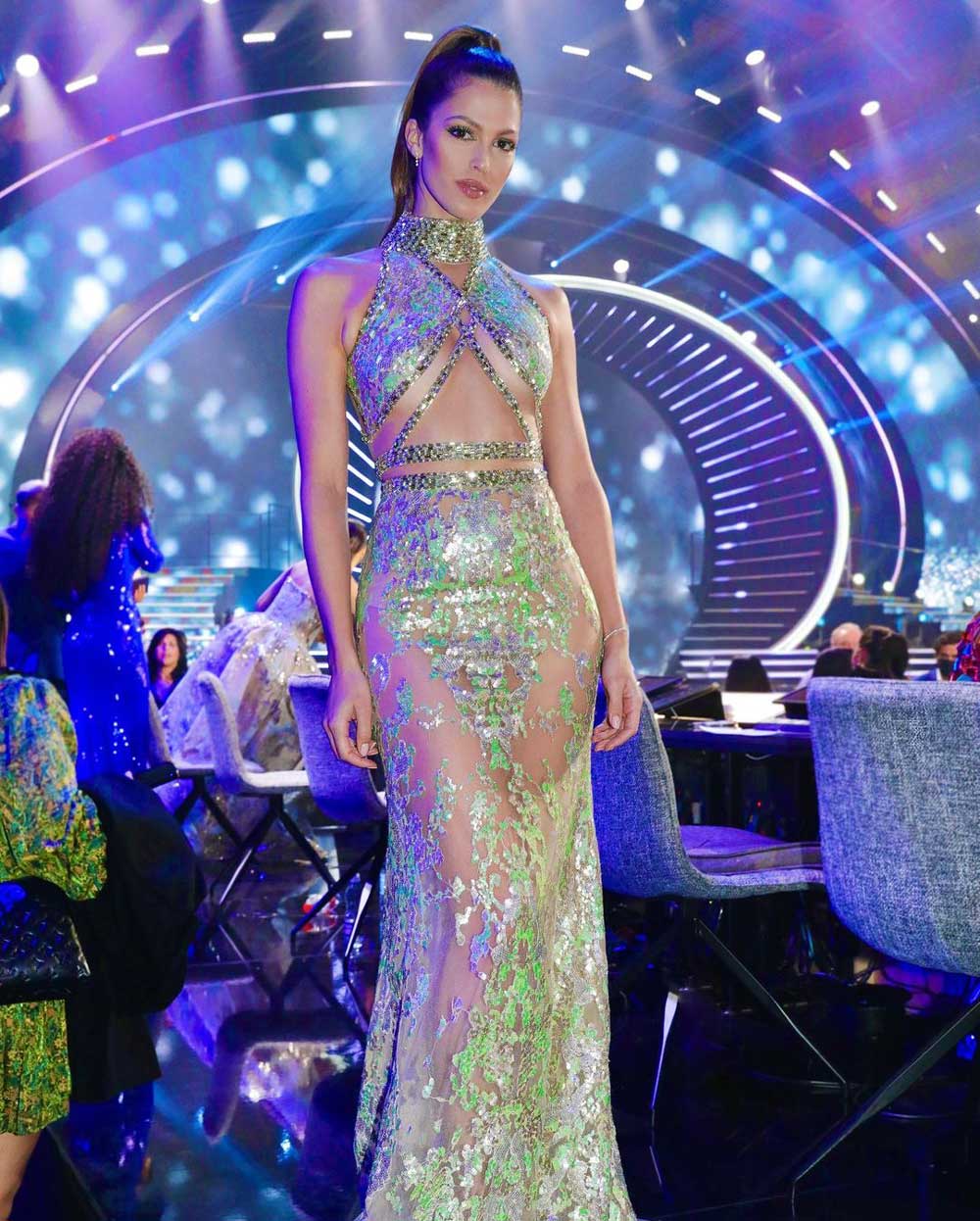