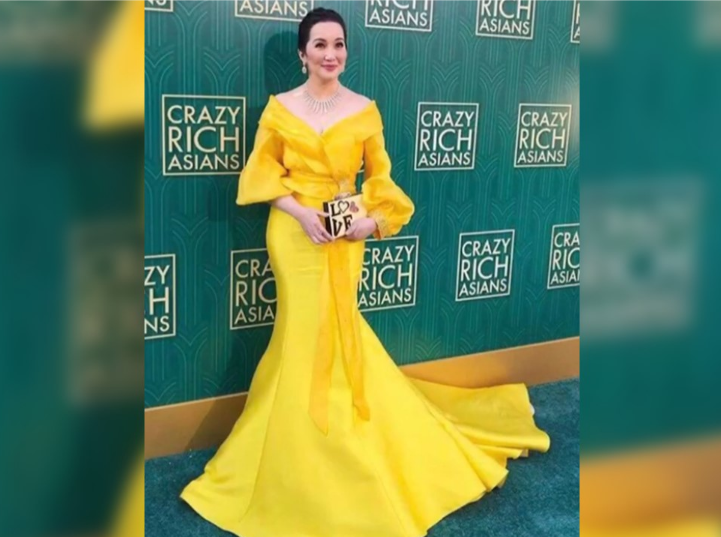 The Queen of All Media Kris Aquino looked expensive and regal as she graced the premiere of her latest movie “Crazy Rich Asians” which took place TCL Chinese Theatre in Hollywood on August 8.

Aquino donned a yellow modernized Filipiniana by Michael Leyva, which she chose from five other options.

We tried 5 gowns- by @francislibiran8 & @michaelleyva_… i’m definitely wearing 1 of these. My jewelry was created by @diagoldjewelry Makeup is by @rbchanco. Many thanks to now LA based @pinantonio for my hair. #kaysarapmagingpilipino #pinoypride ?? See you all at the Hollywood red carpet premiere of @crazyrichasians. ??❤️ (song credit: Impossible Dream sung by @jedmadelaofficial from the album Paalam, Maraming Salamat from @starmusicph)

She was accompanied by her son, Bimby, who decided to embody Filipino pride by wearing a traditional Barong Tagalog during the premiere.

Speaking to entertainment reporter MJ Marfori, Aquino revealed that she has been experiencing low blood pressure but decided to push through and attend the premiere to proudly represent the Philippines.

“I can now admit, while you’re interviewing me, my blood pressure is 80/50. It was will power talaga. I really said na nakakahiya to not show up when they prepared something special for me,” she said.

Marfori noted that despite Kris’ health condition, the actress was the ‘most applauded’ celebrity during the event.

Through an Instagram posts, Aquino expressed her gratitude to her fans.

“Thank you to all the Filipinos who showed up with their flags, banners, and patiently waited since lunchtime to get prime spots. Yung effort na binigay niyo I know wasn’t just for me but because of Philippine pride. Uulitin ko po, kay sarap maging Pilipino. This was a chance to represent our country and I thank God for the once in a lifetime blessing,” she wrote on Instagram.

If you’ll ask me what my unforgettable moment inside the TCL Chinese Theater was- it was being approached by the @wbpictures group chairman Toby Emmerich because he wanted to introduce his favorite staff member from the Beverly Hills Hotel who is a Filipina American. He said that for 25 years she’d been taking such great care of him but had never asked for premiere night tickets except for tonight for @crazyrichasians because she wanted to meet me. It was just so heartwarming how many pictures Mr. Emmerich took of us because it just proved to me that anywhere in the world- our graciousness as a people is valued. I’m sure Bimb & i had the honor of being seated w/ his family because of how much affection a fellow Filipina had for me… @kevinkwanbooks made sure to check on me & as always he expressed so much gratitude for the support of Filipinos worldwide. P.S. Nabalitaan ko po na may konting sagutan na naganap between my brother & Sec Alan Cayetano- sa hindi sinasadyang choice- my clutch came from the Manila Fame & was given by @mayorlanicayetano. #lovelovelove THANK YOU to all the Filipinos who showed up w/ their flags, banners, and patiently waited since lunchtime to get prime spots. Yung effort na binigay nyo i know wasn’t just for me but because of Philippine pride. Uulitin ko po #kaysarapmagingpilipino. This was a chance to represent our country & i thank God for the once in a lifetime blessing. ????❤️ (song credit: Love Moves in Mysterious Ways by @xtianbautista from my Universal Records album My Heart’s Journey)

“This was the reason we made the effort to be here, it is my honor to proudly represent the Philippines. Maraming salamat po sa effort nyo to show your love and support,” she said in another separate post.

This was the reason we made the effort to be here…. it is my honor to proudly represent the Philippines. Maraming salamat po sa effort nyo to show your love & support! #kaysarapmagingpilipino ????❤️

Moreover, Aquino also proved that she is truly a “crazy rich Asian” by wearing pieces of jewelry that costs million of pesos.

ABS-CBN reported that the jewelry pieces that Aquino wore at the event cost “more than a gasoline station” in the Philippines.

According to iFranchise Philippines, the cost of establishing a gasoline station franchise is around P3 million to P5 million.

Aquino earlier revealed that she will be playing Princess Intan in the film which will hit Philippine cinemas on August 22.