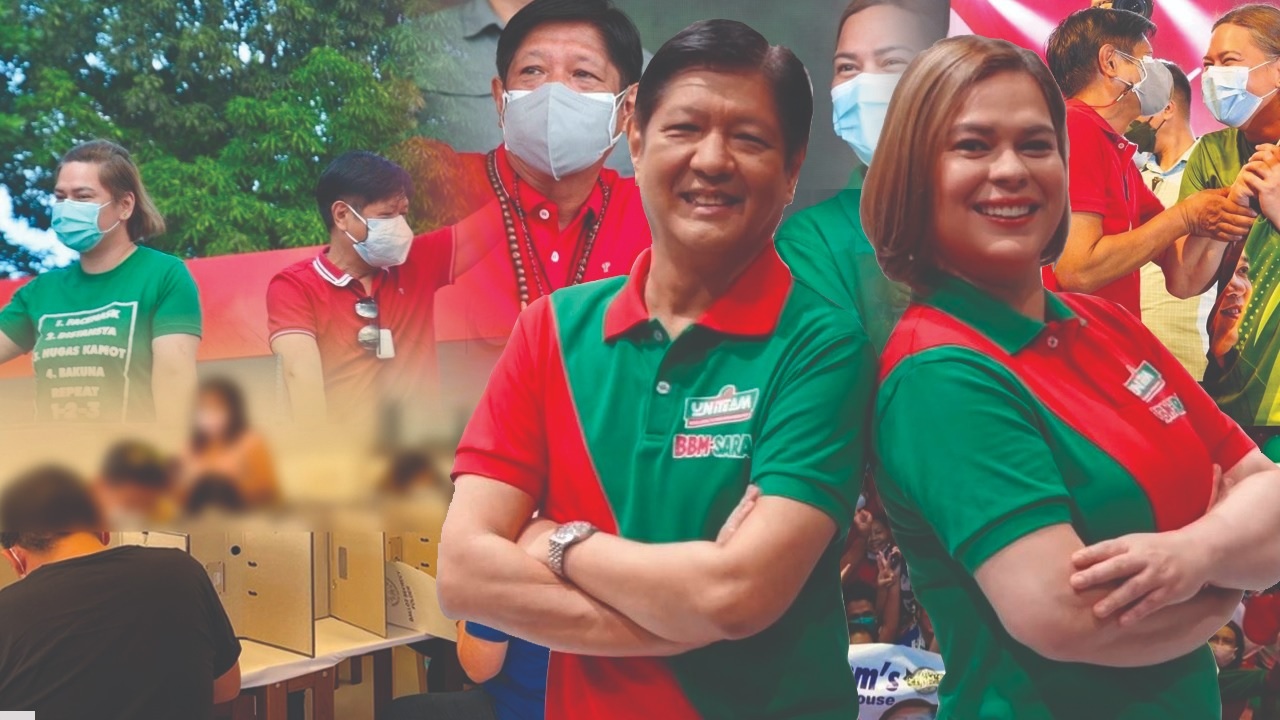 In a decisive win, Ferdinand Marcos Jr. and his running mate Sara Duterte clinched a runaway victory in the overseas absentee voting (OAV) in the UAE.

The numbers reflected their commanding dominance in the partial and unofficial results of the 2022 Philippine general elections, each garnering a staggering vote of more than 31 million.

Both frontrunners in election surveys from the get-go, each of them received 8 out of 10 votes from Filipinos across the UAE.

This translates to 97,314 Filipinos in the UAE who went out to exercise their right to vote at our Philippine Embassy in Abu Dhabi and Consulate in Dubai. 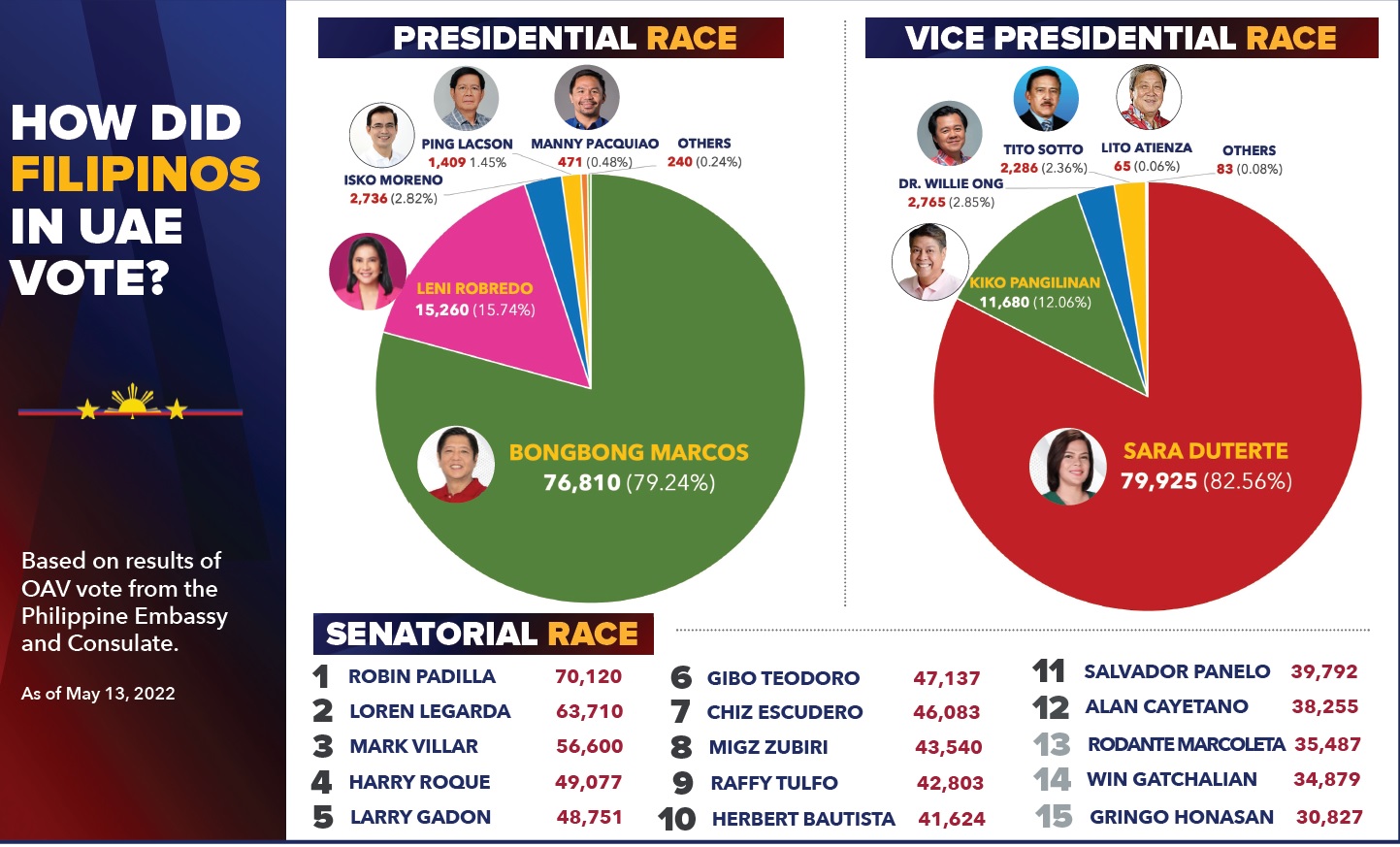 Philippine Ambassador to the UAE, H.E. Hjayceelyn Quintana, commended the spirit of volunteerism and cooperation among three sectors that made the OAV 2022 in the UAE as smooth, fast, and efficient as possible.

Quintana thanked the voting public for practicing their right to suffrage; the individuals duly deputized by COMELEC including officials from the Philippine Embassy in the UAE, the Philippine Consulate in Dubai, as well as the Philippine Overseas Labor Office in both missions who facilitated and made the overseas election possible, and the huge pool of volunteers and poll watchers from different factions who helped to guide each voter.

She likewise thanked the UAE for providing assistance to help manage all polling precincts during the 30-day OAV: “I extend my appreciation to the UAE for the assistance extended to the Philippine missions in UAE which served as the polling places for the in-person casting of votes,” said Amb. Quintana.

For his part, Philippine Consul General Renato Duenas highlighted that the turnout this year has increased compared to the past elections and that the consulate managed the process as efficiently as they could.

“It’s quite high we are pleased with the high turnout of registered voters here in Dubai. Everything has been working well and as it should and cooperating with us. We’ve done our best – all that’s within our power to make it as convenient and advanced for them. As soon as they cast their ballot inside the vote-counting machine, they’re thankful that they’re able to vote here in Dubai,” said ConGen Duenas. 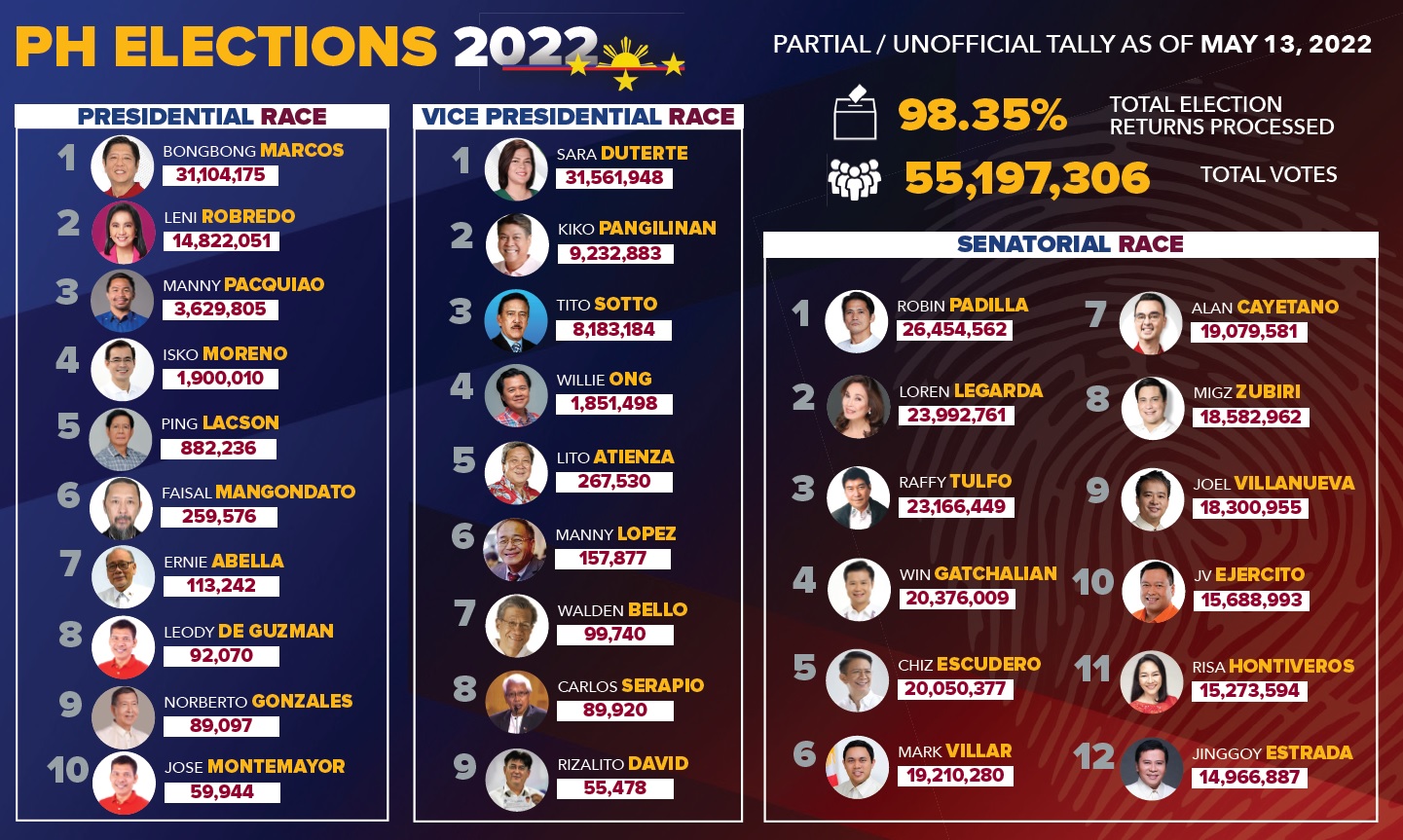 In total, over 55,195,270 Filipinos cast their vote and selected the Philippines’ top government leaders for the next six years. This translates to 81.84 per cent voter turnout for the 2022 elections.

Marcos Jr. leads the quick count by the Commission on Elections (COMELEC) with 31,103,761 votes – equivalent to 56.35% . He is poised to become the first absolute majority president after People Power Revolution in 1986, which ended the 20-year dictatorship of the regime of his father and namesake, the late strongman Ferdinand Marcos. Trailing him at second is Robredo who got 14,821,870 or 26.85% of the votes.

This website uses cookies to improve your experience while you navigate through the website. Out of these, the cookies that are categorized as necessary are stored on your browser as they are essential for the working of basic functionalities of the website. We also use third-party cookies that help us analyze and understand how you use this website. These cookies will be stored in your browser only with your consent. You also have the option to opt-out of these cookies. But opting out of some of these cookies may affect your browsing experience.
Necessary Always Enabled
Necessary cookies are absolutely essential for the website to function properly. These cookies ensure basic functionalities and security features of the website, anonymously.
Functional
Functional cookies help to perform certain functionalities like sharing the content of the website on social media platforms, collect feedbacks, and other third-party features.
Performance
Performance cookies are used to understand and analyze the key performance indexes of the website which helps in delivering a better user experience for the visitors.
Analytics
Analytical cookies are used to understand how visitors interact with the website. These cookies help provide information on metrics the number of visitors, bounce rate, traffic source, etc.
Advertisement
Advertisement cookies are used to provide visitors with relevant ads and marketing campaigns. These cookies track visitors across websites and collect information to provide customized ads.
Others
Other uncategorized cookies are those that are being analyzed and have not been classified into a category as yet.
SAVE & ACCEPT
520 shares
Close