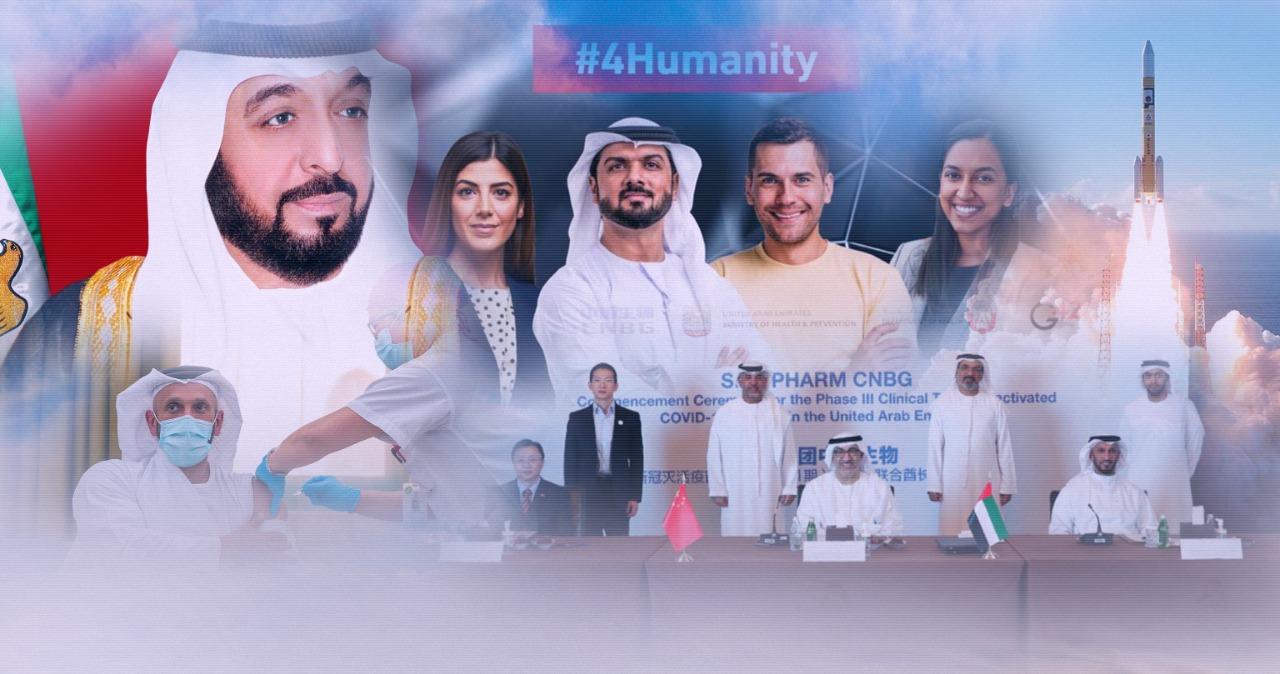 UAE marks the month of July with two historic milestones with the success of the Hope Probe launch and the start of the world’s first human clinical trials of a COVID-19 inactivated vaccine.

The launch of the Hope Probe was the culmination of more than five decades of the nation’s dream in space science that all began with the UAE founding father, Sheikh Zayed bin Sultan Al Nahyan.

In equal measures to safeguard the public health and safety, the country has launched the third stage of clinical trials for a possible COVID-19 vaccine. Simultaneously, the country intends to scale up the 4.18 million COVID-19 tests conducted as of July 14.

President His Highness Sheikh Khalifa bin Zayed Al Nahyan lauded the initiatives and efforts of all the teams responsible for the UAE Hope Probe launch, which is dubbed as the first international Arab interplanetary mission.

His Highness stated that the Emirates Mars Mission is both a national Arab achievement, and is the UAE’s contribution and footprint on helping the world build on knowledge regarding the red planet.

“Hope Probe represents another high-quality, high-value addition to the UAE’s outstanding achievements that will enter history as a source of pride for the UAE and its people,” said His Highness Sheikh Khalifa bin Zayed.

His Highness also expressed his confidence in the youth of this generation, citing that the active participation of the team of 200 young Emirati engineers confirms the prowess of the youth to succeed in various fields.

“We followed with great pleasure and pride today the news of the successful launch of Hope Probe, whose idea was developed within our national and research institutions and was designed and manufactured with the effective participation of a young national elite of bright minds – highly qualified and trained and sincere young Emiratis,” said His Highness Sheikh Khalifa bin Zayed.

UAE now joins an elite club, whose vision is not only to reach another planet, but also to make space science the springboard for accelerated development right here on Earth. From its launch at the Tanegashima Space Centre in Japan, it will begin its 200-day journey towards the red planet which will span over 493.5 million kilometers.

It is now set to become the first dedicated spacecraft to study weather dynamics when it reaches the orbit of Mars by February 2021, in time for the UAE’s golden jubilee celebrations.

The Hope Probe will remain in the orbit for one Martian year, equivalent to 687 days on Earth and will be monitored and controlled from Dubai as it provides key data through transmissions from the spacecraft.

This extraordinary feat by the UAE in space science has also been acknowledged by The National Aeronautics and Space Administration (NASA), praising the UAE’s choice of naming its satellite as ‘Hope Probe’ becomes a symbol of inspiration and optimism for all humanity.

‘’On behalf of NASA, I congratulate our friends in the United Arab Emirates on the launch of the Emirates Mars Mission, Hope. Today marks the culmination of tremendous hard work, focus, and dedication, as well as the beginning of the UAE’s journey to Mars with the ultimate goal of human habitation of the Red Planet. This mission is aptly named since it’s a symbol of inspiration for the UAE, the region, and the world,’’ said NASA Administrator Jim Bridenstine.

While the UAE’s space scientists remain focused on the journey of the Hope Probe, the country’s health experts are also showing their agility and ability to make headway in the fight against COVID-19.

His Excellency Sheikh Abdullah bin Mohammed Al Hamed, Chairman of the Department of Health in Abu Dhabi volunteered to be the first to be administered with Sinopharm CNBG’s inactivated vaccine. Dr. Jamal Al Kaabi, Acting Undersecretary of the country’s Department of Health, followed suit. Both officials showcased their confidence in the success of the human clinical trials of this vaccine.

“I believe it is part of my duty to set an example in my community by taking part in the clinical trials. With persistence and determination, the UAE will move forward with its ambitions to find a cure for the virus,” said Al Hamed during his visit at the Sheikh Khalifa Medical City, where he received the vaccination dose.

Within 24 hours from its initial launch last July 16, authorities reported that they have reached their target of 5,000 participants in the first stage of the programme.

The clinical trials are being conducted under the strict guidance and supervision of the Department of Health Abu Dhabi and SEHA – the Abu Dhabi Health Services Company. The trials follow all international guidelines stipulated by the WHO and the United States Food and Drug Administration, FDA.

The Phase III clinical trials would need 15,000 volunteers of any nationality. The UAE government has launched the website: 4humanity.ae to sign up and be part of the trials. It will be open to individual volunteers aged between 18 and 60 who are living in Abu Dhabi and Al Ain and will last for 42 days.

The first two phases of trials conducted by Sinopharm in China, resulted in 100 percent of the volunteers generating antibodies after two doses in 28 days.