The center was inaugurated by Foreign Affairs Secretary Teodoro L. Locsin, Jr. in an event attended by DFA officials, among them Ambassador Hjayceelyn Quintana, the head of the Philippine Mission in the UAE; and Consul General Paul Raymund Cortes.

In his opening remarks, Locsin said the center will be “open for more days and longer hours to serve our Overseas Filipino Workers (OFWs) with their passports.” He said no prior appointment is needed.

“I am honored to inaugurate this passport renewal center,” said Locsin.

“This marks a new and important milestone for the Philippines and DFA. It is the first passport processing center outside of our embassy or cinsulate

“It is open for more days and longer hours. Best of all, we don’t need an appointment. You can come over on your spare time and don’t have to skip work,” Locsin added.

He said the center is at no expense to the Philippine government. 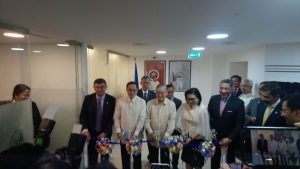 Quintana said UAE is the best place to start this pilot program. “What better country to roll this out? The UAE has always favored innovation. This experiment has to succeed. We are behind in appreciating that technology is a solution,” she said.

Cortes, for his part, said “We are glad that we have presented to our public an option as to where they could apply for their passport renewals.

“As was mentioned a while back, the consulate will remain active in accepting passport renewal applications but with the VFS service, we will be allowing people another venue so that if and when they could not come up with their schedules as far as their passport applications at the consulate is concerned, they can do so at the VFS center.”

He said the next phase would be to open another one in Abu Dhabi next year then in Saudi Arabia.

“This is the first. How many passports a day? Titignan pa. We have to see what the turn out is. This is a pilot project,” Dulay said.

The processing center will have an all-Filipino staff and has four biometrics stations. Data will be forwarded to Manila for processing.

The Filipino Times is the chronicler of stories for, of and by Filipinos all over the world, reaching more than 236 countries in readership. Any interesting story to share? Email us at [email protected]s.ae