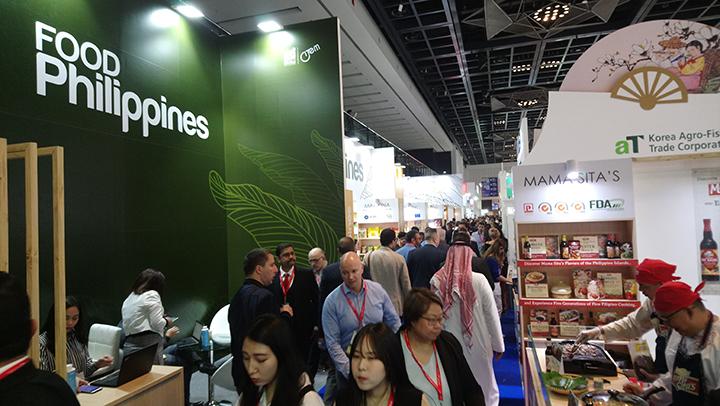 ‘Ang number one export natin ay tao; and hopefully through the OFWs (in the UAE) we would be able to penetrate the mainstream market. The world now eats multiple cuisines. Hopefully, Filipino food products can influence global taste buds through the OFWs.

DUBAI: More and more food and beverage companies from the Philippines have been gaining toehold of key mainstream Gulf markets with plans to further expand elsewhere in the region, including Africa and parts of Europe – thanks to the roughly three million overseas Filipino workers (OFWs) in the Middle East, who also serve as their home country’s food ambassadors.

“Ang number export kasi natin ay tao,” said Rufino Tiam-Lee, chief executive officer at Monde Nissin, which counts the OFW-staple, Skyflakes biscuits and Lucky Me instant noodles as among its products. (Our number one export [as a country] is our human resource.)

“Hopefully, through the OFWs (in the UAE), we will be able to penetrate the mainstream (market),” he said.

There were 51 food and beverage companies from the Philippines – the biggest contingent in years – which were recently in Dubai to promote Filipino products, according to Commercial Attaché Charmaine Mignon S. Yalong.

She said 25 of these attended this year’s edition of Gulfood, one of the world’s biggest fairs for the food and hospitality industries with its previous edition having been attended by 98,000 visitors and participated in by 5,000 exhibitors from 198 countries worldwide, organizers said.

Yalong said the other 26 companies were part of the Philippine Department of Trade and Industries’ (DTI) Outbound Business Matching Mission (OBMM) that also went to Saudi Arabia and Kuwait.

The OBMM delegation was led by DTI Undersecretary Abdulgani M. Macatoman, who shared that locals in some parts of Saudi Arabia where they held their matching mission have particular preference for Philippine products.

“We went to Sarawat (a supermarket chain in Jeddah) and saw that 80% ng mga mamimili dun ay mga OFWs. But I was surprised, kasi pati yung mga lokals nila ay gustong gusto yung mga Philippine products,” he said. (We saw during a visit at Sarawat, a supermarket chain in Jeddah, that 80% of the customers were OFWs. But I was surprised because there were locals as well and they liked Philippine products very much.)

Macatoman said he was also told by management of Carrefour in the UAE during his visit at one of the supermarket chain’s branches, that locals too, like Filipino food products.

With the OFWs’ sheer number, it is not surprising that supermarkets open special sections for them; some, including West Zone, Carrefour and Al Maya, put the Filipino products, mostly canned goods, confectioneries and toiletries in the regular shelves along with products from other countries, thereby providing exposure to other market segments, among them, locals and tourists.

Adding to this is the proliferation of Filipino restaurants where OFWs would naturally take their local friends for dinner or coffee.

“Yung bagoong nga, ayaw nila pero nung pinatikman namin nagustuhan,” Briones said, referring to anchovy sauce, a Philippine delicacy known for its “unfathomable funk,” as one food writer once wrote, whom locals did not like but expressed approval for after a little sampling. The “bagoong” was on display at various Filipino booths during Gulfood, which was held Feb. 17 to 21 at Dubai World Trade Center (DWTC).

Brown rice, imported in the UAE by SL Agritech, is always out of stock at Carrefour, said Jennifer V. Palmera, export manager. “Nauubos ang paninda,” she said. (The supply is always sold out.)

Yalong meantime said there has lately been increasing interest among Philippine food companies to participate at Gulfood given the strong market demand.

She said DTI could have sent more companies at Gulfood had booths not been an issue. “The problem actually was that Gulfood could not give us a bigger space because the event is always overbooked,” she said.

Yalong said UAE supermarkets are “always on the lookout for Philippine products.”

She said the Philippine Trade and Investment Center (PTIC) in Dubai burns the midnight oil linking with appropriate UAE government agencies to ensure increased flow of Philippine products to the country in light of this.

“More importantly, we are able to facilitate entry of products to UAE due to our continuous dialogue with Dubai Municipality and the Emirates Authority for Standardization and Metrology (ESMA).

“We are working with them closely in raising awareness among our Philippine exporters about the standards and regulations of UAE,” she said.

Earlier in July of the same year, DTI’s Philippine Accreditation Bureau (PAB) signed a memorandum of understanding with ESMA for technical cooperation.

The Philippines started organizing delegations for Gulfood 14 years ago with just five companies in tow, according to Rose Marie G. Castillo, a division chief at DTI’s Export Marketing Bureau. At the time, the contingent occupied a small space outside DWTC’s main halls.

“The number of companies participating at Gulfood has increased from five when we started, to 25 this year,” she said.

The OBMM delegation, she added, used to only have 10 companies – a number that has more than doubled to 26 this time around.

Aiming for the mainstream

Having secured shipment for the Filipino community niché market, Philippine food and beverage companies have set their sights on the mainstream – and the rest of the region.

And how do they plan to do it?

Tiam-Lee explained: “Lately, we got a very good distributor partner. They are very strong in distribution. They can operate all – from modern trade or the hypermarts; to general trade or the local supermarkets; and the traditional, the small mom-and-pop stores.

Tiam-Lee said another factor playing to the Philippine companies’ advantage aside from employing logistically sound distributors, is the fact that UAE mainstream market is composed of about 70% migrant population and relatively young at that, who’d experiment in different cuisines.

He cited Thailand’s Tom Yum soup, a spicy and sour broth now popular around the world.

Tiam-Lee said supermarkets these days have a wide array of food products and ingredients coming from different parts of the world.

He said they received inquiries at Gulfood from Jordan, Russia, Afghanistan, Malaysia and Pakistan.

“We are already present in GCC but not on countries outside GCC,” he said.

He added: “UAE is the show window of the Middle East. If you are present here, you will be able to connect and network with other countries. Gulfood is an opportunity to showcase our Philippine products to the Middle East and North Africa.”

San Miguel Purefoods, the food division of San Miguel Corp.’s food and beverage sector, rolled out halal Purefoods Hotdogs at Gulfood in an apparent bid to take the mainstream market by storm.

“We recently got ESMA accreditation for the tender, juicy hotdogs. They are now halal-certified. Now we can go full blast with the mainstream market. The objective is to take it to the next level: go mainstream,” said Jackson Emil G. Lumaban, assistant vice president and head of export and international sales.

“We are present in all supermarkets – Carrefour, Choithrams, Spinneys, Al Maya, Lulu and West Zone, among others,” he said.

Lumaban said retailers are looking for more Filipino products “because they recognize the importance of Filipinos in terms of market and also see it as a platform for growth to their stores.”

He added: “Retailers are now putting our products in the main aisles, not just in the Filipino section, and this gives us more visibility.”

Lumaban said they received inquiries from countries in Africa and Western Europe at Gulfood.

Still another Gulfood exhibitor from the Philippines that have hired a good distributor is Mama Sita’s whose export sales manager, Simon A. Pascual said they have been experiencing continuous double-digit sales growth year-on-year for the past 10 years that the company has been participating at the event.

“The UAE is one of Mama Sita’s largest markets,” said Pascual, adding that the brand’s oyster sauce has been its bestselling product.