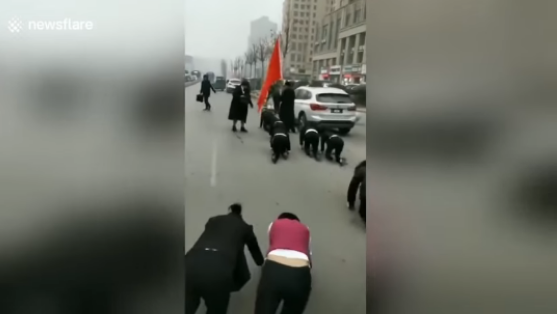 Seven workers were forced to crawl on a roadside as a form of punishment for their failure to achieve their company’s yearly performance target.

In a viral video, seven Chinese workers in their formal attires, six women and one man, are seen crawling on the side of the road as they follow another person who is carrying the company flag.

Reports claim that the employees are employees of the beauty service department of a company in Tengzhou City in China.

According to one of the employees, they were punished as a form of “self discipline measure” for their failure to reach the company’s targets for the year.

Police eventually intervened to stop the punishment and assured that the incident will be investigated.

Following the release of the video, the company was said to have temporarily closed down.

This is not the first time that a video of Chinese workers being punished by their employees went viral.

In August 2018, employees of a restaurant were forced to crawl at a park to “inspire” them.