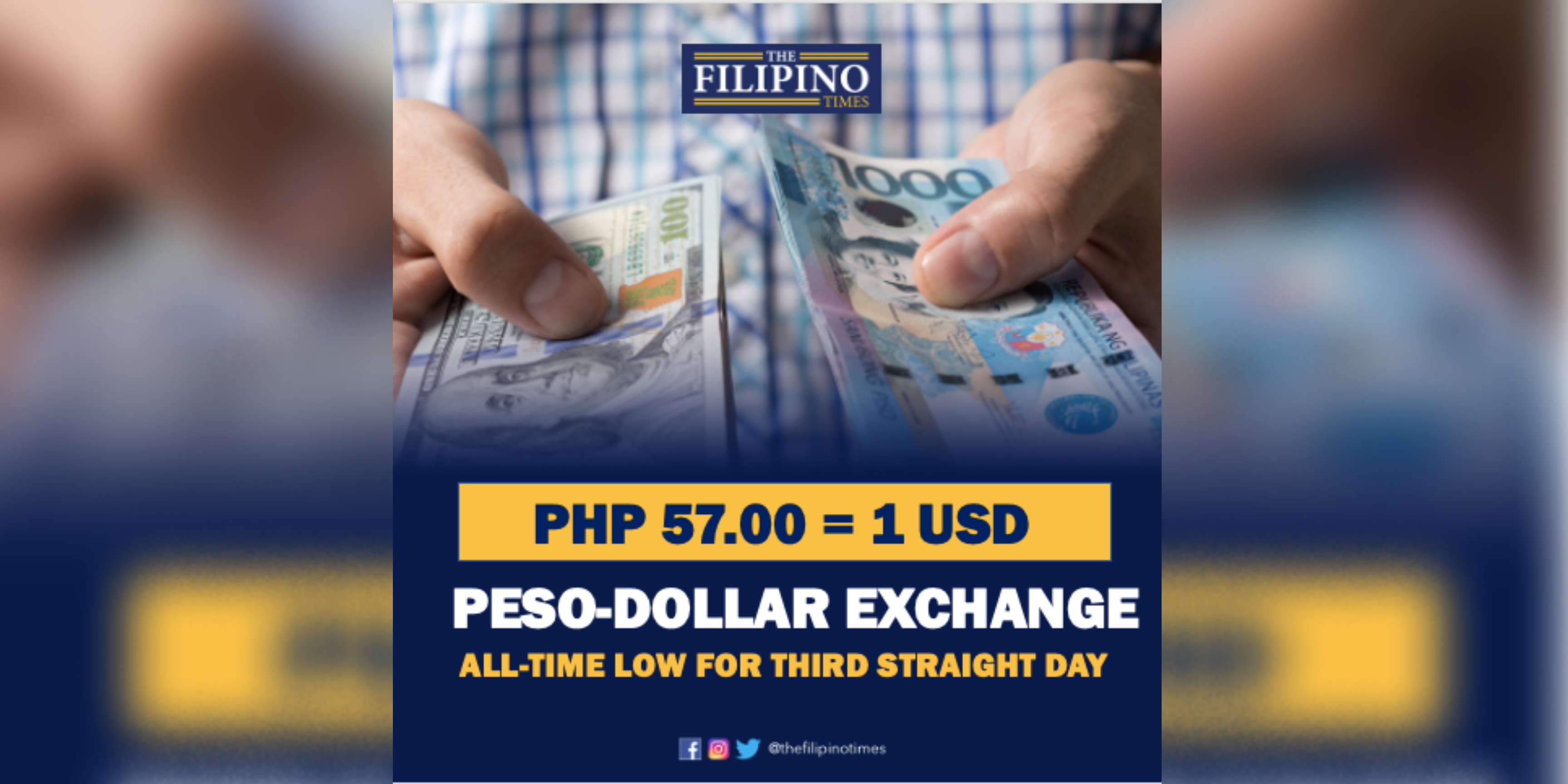 The Philippine peso value continued to weaken on Tuesday, September 6 as it closes at P57.00 according to the data from the Bankers Association of the Philippines.

The peso closed at P56.999 on Monday and P56.77 last Friday, making today’s peso-dollar exchange the all-time lowest rate of peso for the third straight day.

Governor Felipe Medalla of Bangko Sentral ng Pilipinas earlier stated that the currency depreciation is happening globally due to the strong dollar.

Meanwhile, National Statistician Dennis Mapa said the government is closely monitoring the currency as the exchange rate could affect the import of fuel products which has an impact on local pump prices and other commodities.

Several economists are predicting that the value could fluctuate in the coming months with the increase in demand from Business Processing Outsourcing (BPO) companies and expected rise in remittances from Overseas Filipino Workers (OFWs) during the holiday season.

This website uses cookies to improve your experience while you navigate through the website. Out of these, the cookies that are categorized as necessary are stored on your browser as they are essential for the working of basic functionalities of the website. We also use third-party cookies that help us analyze and understand how you use this website. These cookies will be stored in your browser only with your consent. You also have the option to opt-out of these cookies. But opting out of some of these cookies may affect your browsing experience.
Necessary Always Enabled
Necessary cookies are absolutely essential for the website to function properly. These cookies ensure basic functionalities and security features of the website, anonymously.
Functional
Functional cookies help to perform certain functionalities like sharing the content of the website on social media platforms, collect feedbacks, and other third-party features.
Performance
Performance cookies are used to understand and analyze the key performance indexes of the website which helps in delivering a better user experience for the visitors.
Analytics
Analytical cookies are used to understand how visitors interact with the website. These cookies help provide information on metrics the number of visitors, bounce rate, traffic source, etc.
Advertisement
Advertisement cookies are used to provide visitors with relevant ads and marketing campaigns. These cookies track visitors across websites and collect information to provide customized ads.
Others
Other uncategorized cookies are those that are being analyzed and have not been classified into a category as yet.
SAVE & ACCEPT
62 shares
Close