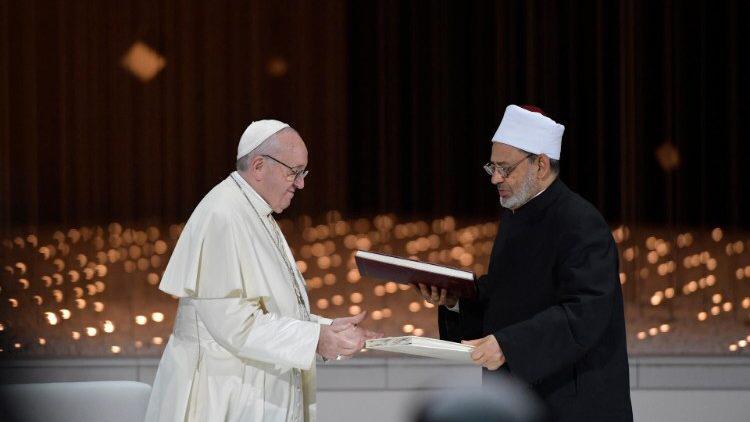 The visit to the UAE earlier this week by Pope Francis, head of the Catholic Church, and by the Grand Imam of Al Azhar, Dr. Ahmed Al-Tayeb, has, rightly, attracted global attention. The visit by Pope Francis itself, the first-ever journey to the Arabian peninsula by a Catholic Pontiff, drew headlines in the media, while an audience of perhaps hundreds of millions will have followed it on television. It was a remarkable occasion, and one whose impact will long be felt here, both in the United Arab Emirates and far beyond.

Perhaps of longer-lasting significance, though, will be the outcome of the Global Conference of Human Fraternity which they, and other leaders from a wide collection of religious faiths, attended, in particular the Document on Human Fraternity that both Pope Francis and the Grand Imam signed. Representing the fruits of detailed discussions on a wide variety of topics, this document offers a way forward in terms of promoting greater understanding between Islam and Christianity.

Both Pope Francis and the Grand Imam have called for the widest possible dissemination of, and discussion of, the document, in schools and elsewhere across society. As that process gets under way, we will then be able to assess whether their noble initiative bears fruit. We must hope that it does so, for only through the building of a common sense of human fraternity will humanity be able to move forward.

It is already evident, though, that the visit has been recognised as being one of great importance. As Rev. Johnnie Moore, President of the Congress of (US) Christian leaders and a member of the US Commission on International Religious Freedom, said in an opinion piece for Fox News, “it is impossible to exaggerate the significance” of the visit.

It was not a matter of pure chance that this historic encounter took place in the United Arab Emirates. When Pope Francis and the Grand Imam accepted the invitation extended by His Highness Sheikh Mohamed bin Zayed Al Nahyan, Crown Prince of Abu Dhabi and Deputy Supreme Commander of the UAE Armed Forces, for them to come to Abu Dhabi, they did so in the knowledge of the UAE’s reputation as a country where religious and cultural tolerance between its many diverse communities is deeply rooted and thriving.

The UAE could not have wished for a better start as it embarks on the celebration of 2019 as its ‘Year of Tolerance’.

The visits by Pope Francis and the Grand Imam have had a deep resonance within UAE society, amongst both Muslims and Christians, of varied nationalities and cultural backgrounds. At the same time, though, as we have seen from the widespread media coverage, the mutual respect that all faiths and cultures enjoy in the Emirates, the outcome of the noble values instilled in our society by the country’s Founding Father, the late Sheikh Zayed, has now attracted international attention. Without that fundamental element in our society, it is difficult to imagine that this historic event would ever have taken place.

It was a courageous step to take, and the Pope, the Grand Imam and His Highness Sheikh Mohamed deserve credit and thanks for having taken it.

As Reverend Moore said, “The UAE has long been a beacon of openness, freedom and tolerance in the Islamic world. But this week’s events have taken those efforts to another plane, entirely. They are the fodder of history, examples of profound leadership in a turbulent time, and they deserve the commendation of the entire world.”

We in the Emirates can, perhaps, hope that our experience in building a society based upon the pillars of security, stability, sustainability and human fraternity may serve as a future model for the building of a new Middle East.

Whether, as Reverend Moore suggested, the heartwarming and hugely significant initiatives of this week, “merit the notice of the Nobel Committee” when that body next meets to consider the next Nobel Peace Prize is something for others to address.

We are, simply, happy to have played our part.