DUBAI: Thanks to UAE’s religious tolerance, Dubai now has married couples whose beginnings go back to cool December evenings at St. Mary’s Church where they attended Simbang Gabi and serendipity put sparkles in their eyes.

This, according to Emolyn “Tita Ems” Bucsit, Filcom coordinator at St. Mary’s Church who told The Filipino Times that in most instances, the couples were strangers who ended up huddled with other churchgoers by ushers or usherettes ensuring order amid the huge crowd. 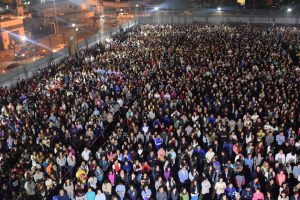 “There are so many cases ng Simbang Gabi where they found their true love. We have proofs of families na sa Simbang Gabi nagsimula. For many years, they were seated in the same site, nagkatabi, nagkakilala,” said Bucsit.

She quipped that one of the strangers probably wished that the next person would turn out to be his/her “forever,” noting the saying that wishes made during Simbang Gabi come true once all nine masses have been completed.

Meanwhile Filipino community leaders and average Overseas Filipino Workers (OFWs) are grateful to leaders of the UAE for its policy of tolerance and openness.

Bucsit reminded the community not to abuse this. “We should know our limitations – they have their culture and we should also respect that,” she said. 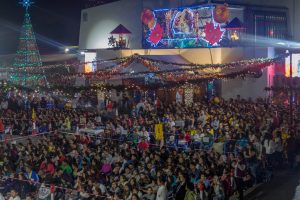 Amy Miranda, nurse and Umm Al Quwain Filipino community leader said she is happy and proud that UAE has allowed the practice of different religions though they are prominent Muslim country.

“More than tolerance is the respect they have shown and given to each of us expatriates. The visit of our very own Pope Francis this year was really one of a very kind gesture of tolerance, respect and brotherhood which the world had witnessed,” she said.

Abu Dhabi-based Rochelle Espiritu of the Couples for Family and Life said the government’s tolerance has encouraged the various congregations to freely practice their faith. “Talagang wala nang hindrance,” she said.

“UAE’s policy of tolerance allows expatriates to feel comfortable about living and working in a country which upholds acceptance and co-existence, and therefore global harmony amongst its multi-national and multi-cultural population,” said  Joanne Rico,  2017 TFT Marketing and Advertising Professional of the Year

Anthony Deleon, Dubai-based vlogger, said he is very thankful that he “lives and works in a highly tolerant country like the UAE.

“Despite being in the Middle East and predominantly Muslim, the country’s wise leadership promotes and encourages a culture of tolerance so that other cultures can peacefully co-exist with each other,” he said.