Actress Angel Locsin proved once again that she is indeed a real-life Darna as she made a surprise visit to the typhoon-ravaged province of Northern Samar.

In a Facebook post, Rei Josiah Echano, provincial disaster risk reduction management officer of Northern Samar revealed that someone contacted him that a group would be visiting Catarman, Samar.

“I told them that I could provide them trucks for their relief operation. Had I known that it was Angel Locsin’s group, I could have done more” Echano said. 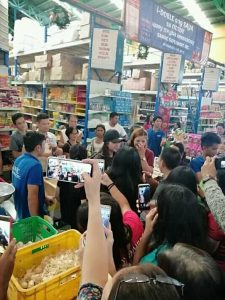 The official said that the people were so happy to see Locsin upon her arrival in the town.

Locsin went to the grocery and bought relief items and distributed it to Samar residents.

She also went to a nearby town of Allen and left the province to return to Manila this afternoon.

Forbes Asia has listed the Kapamilya actress as among ‘Heroes of Philantrophy’ alongside billionaires in the region.

In a series of tweet, Locsin said that she hopes she was able to inspire other Filipinos to help each other.

“I never thought @ForbesAsia would ever mention my name. Thank you! Filipinos have always been known for ‘bayanihan,” she said in a tweet.

She added that she’s far from being a billionaire but she would continue to act in her own little way.

“I’m nowhere near from being a billionaire, but I try my best to do my part in my own little way. I hope this would inspire other people to help as well,” she said.