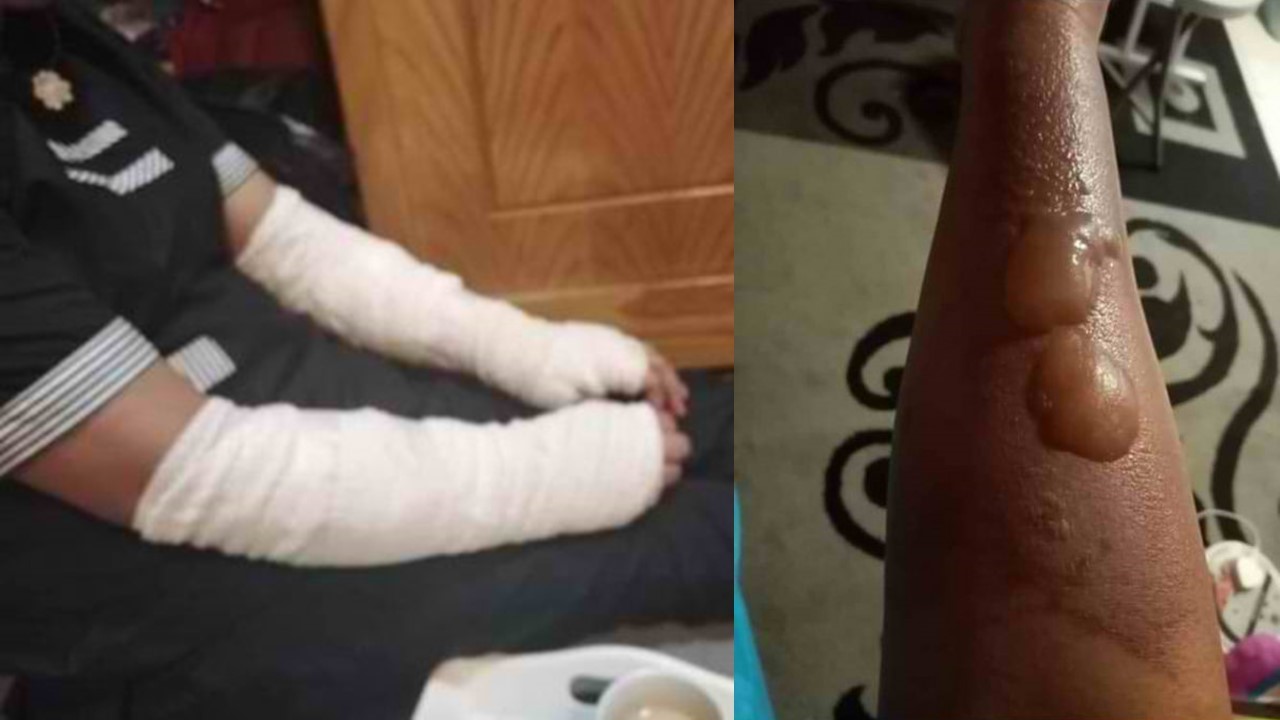 An overseas Filipino worker (OFW) in Kuwait is asking for help after an oven exploded while she was cooking, causing second-degree burns on her arms and face.

According to Facebook user Claire Sarmiento, her mother Amor S. Talleser was cooking at around 2am on May 25 when the incident happened.

Worse, despite the painful burns on her body, her employers took her to the hospital hours later at 5am that day.

Sarmiento shared some photos showing the wounds and blisters her mother sustained on her arms because of the explosion.

Talleser said her employers assured her they will give her some time to recover and rest. However, only a few days after the incident, her employers were already demanding her to go back to work.

The OFW asked for a few more days since she was still in pain, but her employers did not allow her.

When she asked to go back home instead, her employers told her that she can only leave is she will be able to pay them Php150,000.

Because she did not have that money, Talleser was left with no choice but to endure the pain and return to work.

Sarmiento also said in her post that her mother tried reaching out to her agency but they refused to help her mother to go home.

She said they already sought the help of the Overseas Workers Welfare Administration (OWWA), but they have to wait for days.

As of press time, there has been no further updates regarding Talleser’s case.

This website uses cookies to improve your experience while you navigate through the website. Out of these, the cookies that are categorized as necessary are stored on your browser as they are essential for the working of basic functionalities of the website. We also use third-party cookies that help us analyze and understand how you use this website. These cookies will be stored in your browser only with your consent. You also have the option to opt-out of these cookies. But opting out of some of these cookies may affect your browsing experience.
Necessary Always Enabled
Necessary cookies are absolutely essential for the website to function properly. These cookies ensure basic functionalities and security features of the website, anonymously.
Functional
Functional cookies help to perform certain functionalities like sharing the content of the website on social media platforms, collect feedbacks, and other third-party features.
Performance
Performance cookies are used to understand and analyze the key performance indexes of the website which helps in delivering a better user experience for the visitors.
Analytics
Analytical cookies are used to understand how visitors interact with the website. These cookies help provide information on metrics the number of visitors, bounce rate, traffic source, etc.
Advertisement
Advertisement cookies are used to provide visitors with relevant ads and marketing campaigns. These cookies track visitors across websites and collect information to provide customized ads.
Others
Other uncategorized cookies are those that are being analyzed and have not been classified into a category as yet.
SAVE & ACCEPT
671 shares
Close