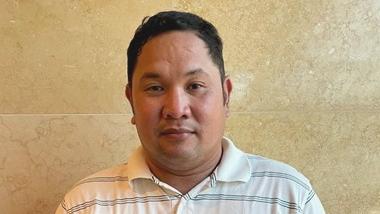 Delivery rider Roland Baltazar, a Filipino resident in Abu Dhabi, has finally turned lucky last week as he became an instant millionaire after winning a raffle in Dubai.

It was a dream comes true for Roland, who had been trying his luck at various draws since he landed in Dubai 10 years ago.

“I’ve been participating in the draw from day one and I never lost hope,” Roland, who works as a delivery rider at a cake shop, said.

“I never thought that I’d become a millionaire but now I know for sure that everything in life is possible,” he added.

Roland, who had been working very hard to financially support his family in the Philippines all this while, will now use the prize money to build a house for his family.

“I can finally buy land for my mother so she can build her dream home,” he said.

The other winner of the 27th weekly Mahzooz draw was an Emirati national. He also matched five out of six numbers and claimed AED1 million.

This website uses cookies to improve your experience while you navigate through the website. Out of these, the cookies that are categorized as necessary are stored on your browser as they are essential for the working of basic functionalities of the website. We also use third-party cookies that help us analyze and understand how you use this website. These cookies will be stored in your browser only with your consent. You also have the option to opt-out of these cookies. But opting out of some of these cookies may affect your browsing experience.
Necessary Always Enabled
Necessary cookies are absolutely essential for the website to function properly. These cookies ensure basic functionalities and security features of the website, anonymously.
Functional
Functional cookies help to perform certain functionalities like sharing the content of the website on social media platforms, collect feedbacks, and other third-party features.
Performance
Performance cookies are used to understand and analyze the key performance indexes of the website which helps in delivering a better user experience for the visitors.
Analytics
Analytical cookies are used to understand how visitors interact with the website. These cookies help provide information on metrics the number of visitors, bounce rate, traffic source, etc.
Advertisement
Advertisement cookies are used to provide visitors with relevant ads and marketing campaigns. These cookies track visitors across websites and collect information to provide customized ads.
Others
Other uncategorized cookies are those that are being analyzed and have not been classified into a category as yet.
SAVE & ACCEPT
811 shares
Close