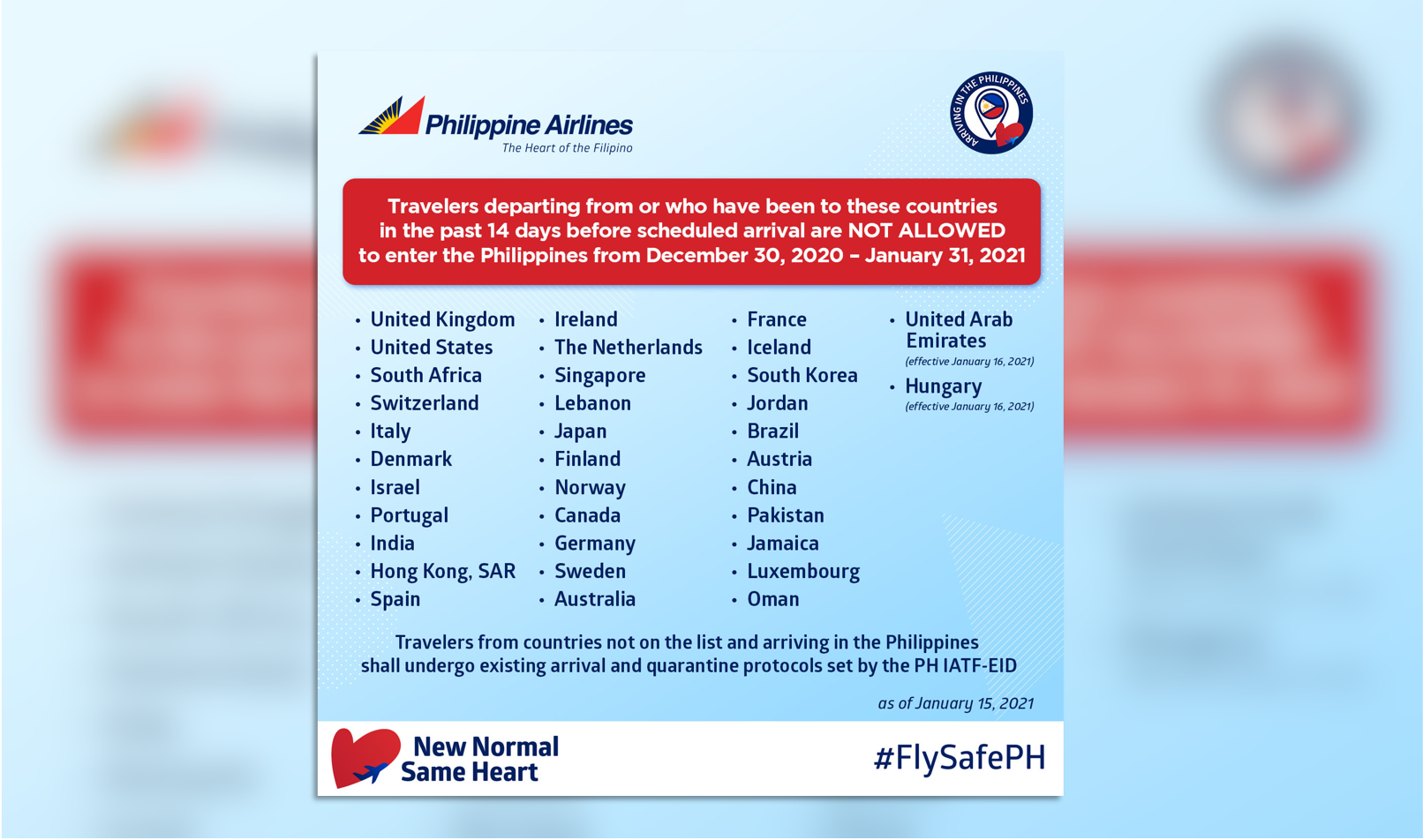 Flag carrier Philippine Airlines on Friday announced that travelers from the UAE, except Filipino nationals and other eligible passengers, will not be allowed to fly to the Philippines, effective January 16, 2021.

Other airlines operating between the UAE and the Philippines have yet to issue a statement regarding their protocols on accepting Filipino passengers.

PAL said in an advisory: “Travelers departing from or who have been to these countries (UAE and Hungary recently added) in the past 14 days before arrival are NOT ALLOWED to enter the Philippines from December 20-January 31, 2021.”

UAE passengers who are already in transit and will be arriving in the Philippines before 12:01 AM (Manila time) of January 16, 2021, including travelers who have been to the UAE and Hungary within 14 days before arrival in the Philippines will be allowed to enter.

However, they must take an RT-PCR Test and undergo a 14-day mandatory quarantine at a facility designated by the Philippine government or stay at an accredited hotel of their own choosing and account.

The following are exempt from the travel ban: 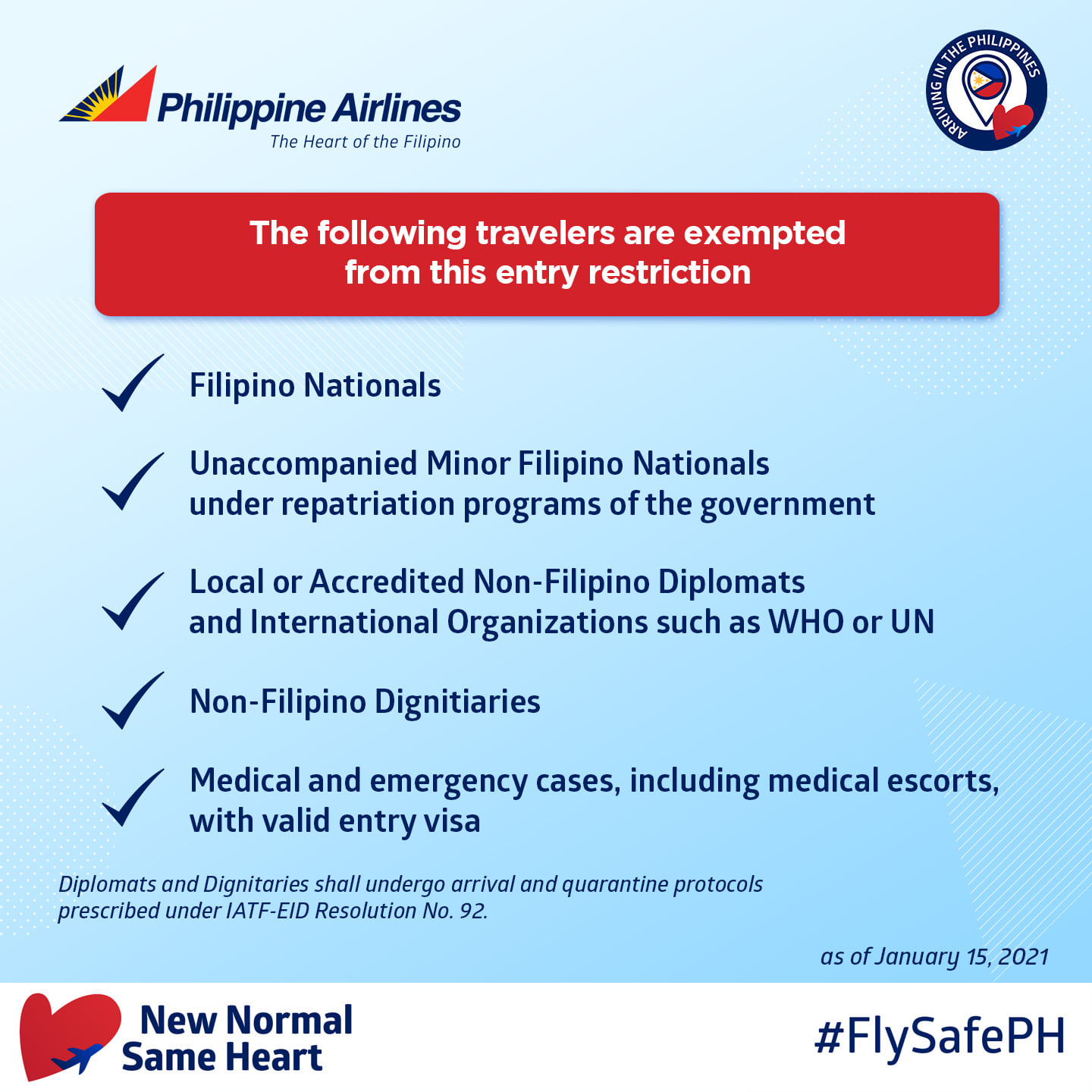 Those who will be allowed to enter the Philippines will have to observe the following protocols: 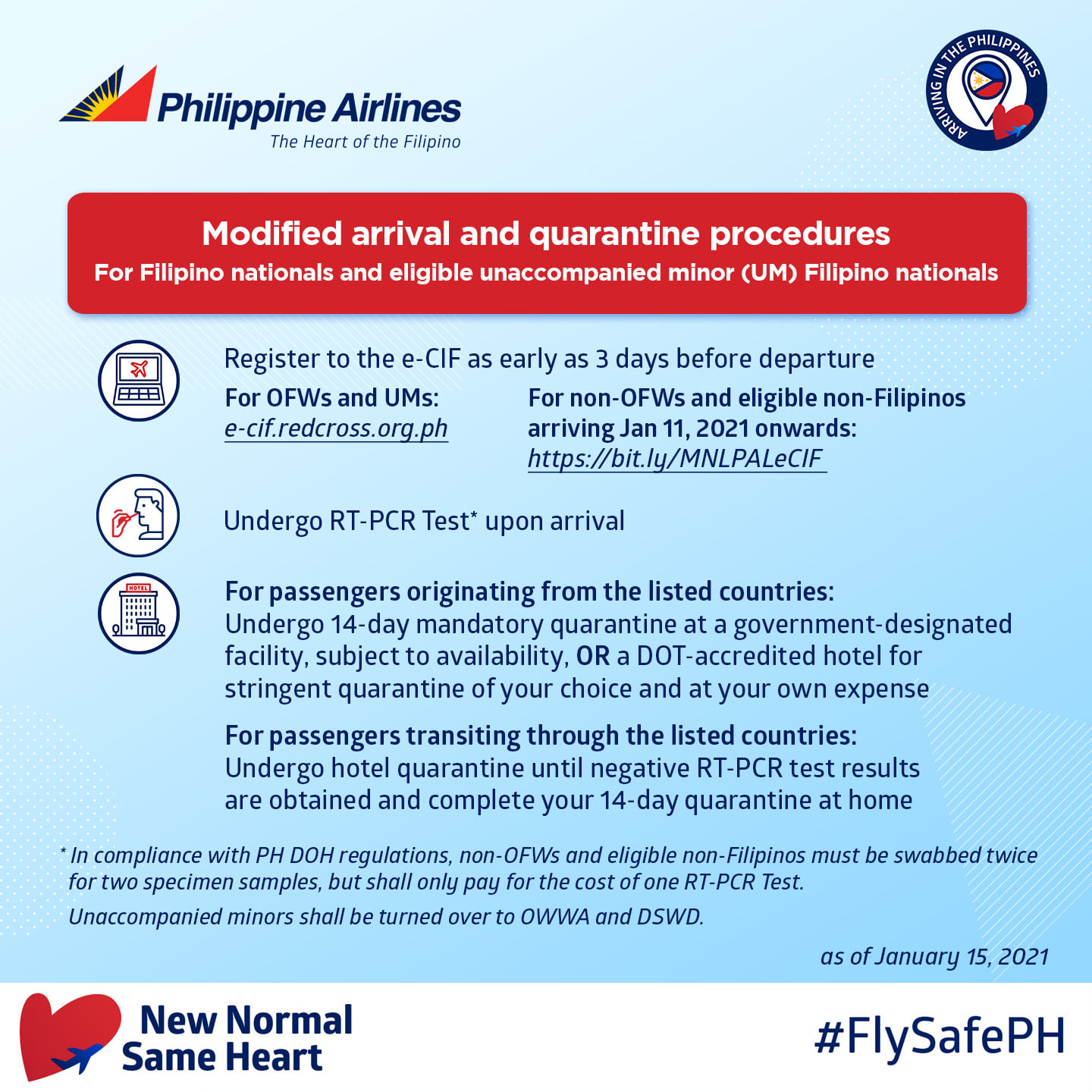 On Friday announcement of the Inter-Agency Task Force (IATF), the UAE was not included in the Philippines’ travel ban list due to the COVID-19 variant first reported in the United Kingdom.

The COVID task force has only extended the government’s travel restrictions on over 30 countries and territories until end of the month.

“The IATF approved the recommendation to extend until January 31, 2021 the entry travel restrictions and the rules applicable to all travelers coming from or transiting,” Presidential Spokesperson Harry Roque earlier said in a statement.

The announcement came a day after the Department of Health (DOH) said they will be recommending travellers from the UAE to be part of the list following the discovery of the Philippines ‘patient zero’ of the UK COVID-19 variant.

The patient is a 29-year-old male traveller, who arrived from Dubai last January 7 from Dubai.

With the extension of the travel ban on these countries, the government has also directed the Department of Transportation (DOTr) to strictly implement issuances against airlines that allow the boarding of passengers who are prohibited from entering the Philippines.

“The IATF, in coordination with other agencies, may issue implementing guidelines on the exemptions to these entry restrictions,” Roque added.

Malacanang also said that there will be intensified contact tracing protocols by expanding to third-generation contacts for known new variant cases.

All identified close contacts are required to undergo a strict facility-based 14-day quarantine while remaining contacts from the flight manifest shall be advised of the appropriate quarantine protocols.

Also, those who are found to be positive, apart from the prescribed testing and quarantine protocols, shall undergo whole genome sequencing to be conducted by the Department of Health (DOH), University of the Philippines Philippine Genome Center (UP-PGC), and the UP National Institutes of Health (UP-NIH).

Roque said that the Overseas Workers Welfare Administration (OWWA) and the DOTr One-Stop Shop shall ensure that appropriate protocols are implemented for all those found to be positive of the new COVID-19 variant.