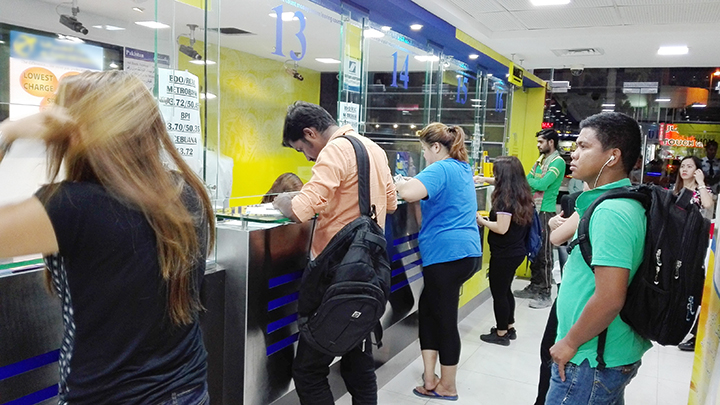 Filipino workers in the UAE sent Dh3.2 billion or around 7.9 percent of the entire remittances from the emirates. This is the third biggest remittance sent home by expatriates in the UAE, according to Wall Street Exchange.

Overseas Filipino workers around the world sent home $9.74 billion from January to April this year, and the United Arab Emirates (UAE) was in the top four sources of remittances, according to Central Bank of the Philippines (CBP).

Remittances from these countries accounted for 78 percent of total remittances.

CBP Governor Benjamin Diokno said land-based OFWs were the drivers of the growth in remittance because they have work contracts of one year or more.

Still according to CBP, Filipinos in the UAE sent $547.3 million from January to April this year.

Meantime, official figures released by the Central Bank of the United Arab Emirates (CBUAE) showed that money sent by Filipino expats in the UAE to their families and loved ones in the Philippines have reached an estimated total of Dh 3.2 billion or the equivalent of Php 42.57 billion.

The CBUAE said Filipinos, numbering approximately one million in the UAE, account for the third largest remitters with 7.9% percent of the total of Dh 38.41B remitted by the entire expat community during the first three months of the current year.

Edwin Punzalan, Assistant Vice President for BDO Remittance and BDO Country Manager in the UAE, said the Filipino community has always been consistent with its ranking on the remittance scene. “Previous statistics have always shown that the Filipino segment of the remittance industry ranks either second or third,” Punzalan told The Filipino Times.

“That is why,” he added, “yung economy natin is almost dependent on OFW remittances.”

For his part, Cherian Joseph, head of products, partnerships and channels at Sharaf Exchange, another key player in the UAE money transfer industry, acknowledged how huge a market the Filipino community is.

“We have a reasonable share and we are working to increase it by offering things that are of value to them,” he said, referring to, among others, the company’s loyalty program.

Joseph added: “The love for their own families that Filipinos demonstrate is deeper than most other expatriate communities. This is evidenced through their earnest desire to uplift the financial status of relatives, for which they joyfully remit funds back home.

Remittance: how it works

The Philippine economy is in a sound position today in part because of the steady growth and size of remittances of OFWs to the country, Prof. Gerardo P. Sicat of the University of the Philippines’ School of Economics once said.

Economists explain that dollar sent by OFWs help replenish the country’s reserves which are used to pay imports needed for infrastructure projects that in turn expedites growth by attracting investments, creating jobs and speeding up the movement of goods and services.

As Sicat put it, “OFW remittances have significantly contributed to a positive impact on the country’s earnings of foreign exchange. By substantially adding to the country’s earnings in foreign exchange, these remittances have contributed to the strengthening of the nation’s balance of payments position, bolstering the surpluses on current accounts.”

Indeed, a well-stocked dollar reserves, which is experienced traditionally during the yuletide season brought about by increased OFW remittances, help buoy the peso against the dollar, and moreover, allow for higher peso purchasing value, experts say.

Meantime, Sicat said OFW remittances, at the home front, raise a family’s standard of living such that it translate into income flows used in consumption, and investment not to mention better education for the children.

Last and most important, Sicat said is that the steady inflow of remittances enables the Philippines to buy more foreign goods and services. “This also means that it is now in a more comfortable position to service its external debt and other international obligations,” he said.

The Philippine economy has steadily been growing at a projected rate of 6.36 percent from 2010 to present, according to the World Economic Historical Statistics, data of which was extracted from the World Bank, the Organization for Economic Cooperation and Development, the International Monetary Fund, the World Trade Organization, the United Nations’ specialized agencies.