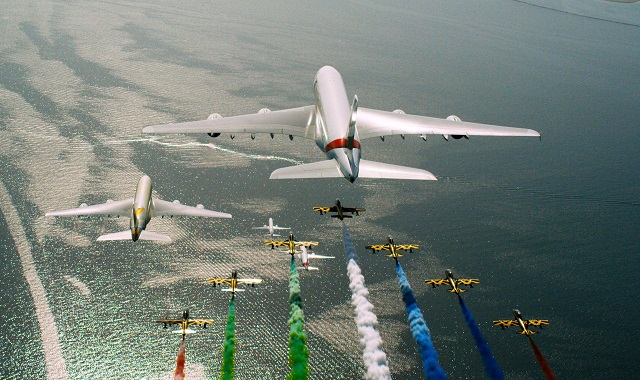 WAM: Boeing delivered 39 airplanes in 2018 to its regional customers in the Middle East, 21 of which were to UAE carriers, according to Bernard J. Dunn, President, Boeing Middle East, North Africa and Turkey.

In an exclusive interview with the Emirates News Agency, WAM, ahead of the International Defence Exhibition, IDEX, starting in the UAE capital today, Dunn described 2018 as a “great year”.

“2018 was a great year. Globally, we set a new annual record of 806 deliveries in 2018, surpassing our previous record of 763 deliveries in 2017. Boeing again grew its significant order book with 893 net orders, including 203 airplane sales in December.”

The American multinational corporation that designs, manufactures, and sells airplanes, rotorcraft, rockets, satellites, and missiles worldwide, has delivered 39 commercial aircraft in 2018 to the Middle East.

“Boeing has a strong order book in the Middle East (612 airplanes) and demand for both its wide-body and single-aisle airplanes among Middle East customers continues to grow, many of which have placed confidence in our new products and technologies.”

Dunn expressed an optimistic outlook for the coming years despite market challenges.

“Aerospace is among the strongest industrial sectors in the world today. Boeing’s Current Market Outlook estimates passenger and cargo traffic will continue to grow 4.7 percent and 4.2 percent a year, respectively doubling over the next 20 years. The global middle class is expanding by 160 million a year and some reports indicate four out of five people have never flown,” he said.

“That means the world is going to need many more airplanes to fulfill the inevitable demand. We estimate nearly 43,000 over the next 20 years. These more fuel-efficient airplanes are helping to open up an increasing number and variety of point-to-point routes and new city pairs around the world.”

Dunn descibed the US company’s relations with the UAE as “long-standing” and supportive of the country’s economic diversification efforts and its ambitions to develop advanced aerospace and defence capabilities.

“Boeing shares a long-standing relationship with the United Arab Emirates. From air transport and aviation support services to defence and satellite systems, Boeing has worked closely with UAE civil and defence authorities to achieve the country’s objectives and ambitions. The company’s industrial collaboration with the Mubadala Development Company, Tawazun Precision Industries and Emirates Defence Industries Company, EDIC, reflect Boeing’s support of the UAE’s ambitions to diversify its economy,” he said.

“We just celebrated Etihad’s first commercial flight using sustainable fuel produced in the UAE. The flight from Abu Dhabi to Amsterdam marked a major milestone in the development of a clean, alternative aviation fuel to reduce carbon emissions. The initiative also addresses food security in the UAE through the farming of seafood as a core element in the process.”

He cited the company’s recent increase of quarterly dividend to 20 percent, US$2.05 per share in 2019 as a testament to “Boeing’s strong core operating performance and ongoing confidence in our financial strength and long-term outlook of our business and industry.”

“Overall, we continue to see significant opportunities in the markets we serve, and we have confidence in the power of our strategy to execute and win on all fronts,” he added.

The US company’s regional president underlined the power of innovation in leveraging the company’s strategy.

He said, “We aspire to be recognised as the best in aerospace and an enduring global industrial champion. Whether it’s top-line revenue growth, bottom line growth or cash performance, the financials are important. But it’s more than that. We’ll continue to drive the pace of innovation; we’ll continue to invest in our team; we’ll continue to raise the bar so we can thrive and grow in our second century, and so we can win not only in the marketplace but across overall standards of company performance.”

According to statistics obtained by WAM, international orders based on backlog represent roughly 30 percent of Boeing Defence and Space and Security’s business, however, there is continued opportunities for growth, particularly in the Middle East and the Asia Pacific regions.

Boeing continues to work closely with the United Arab Emirates and other governments and defence forces in the region, which will be present at IDEX, and play a key role in enhancing security in the region.

“We have been involved in the Middle East for more than 70 years as exhibited by the large installed base of Boeing products, supporting national security interests in the region. Thanks to the performance of our products, as well as their effectiveness and reliability, we expect to see that base continuing to grow,” said Dunn.

During IDEX, Boeing will showcase a number of key products including the AH-64 Apache, the CH-47F Chinook, and the KC-46A Pegasus.

The AH-64 Apache is seen as the world’s most advanced multi-role combat helicopter and is used by a growing number of international defence forces with Boeing delivering more than 2,300 Apaches to customers around the world since the aircraft entered production.

The CH-47F Chinook is an advanced multi-mission helicopter with advanced cargo-handling capabilities that complement the aircraft’s mission performance and handling characteristics. And the KC-46 is a wide-body, multi-role tanker that is revolutionising the air mobility mission, with the ability to refuel all US, allied and coalition military aircraft compatible with international aerial refueling procedures.