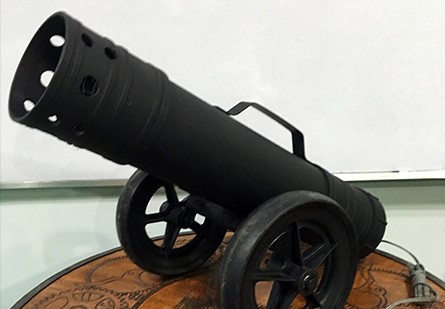 To welcoming the New Year with a bang, a Filipino inventor has introduced “Digong,” “Boy” and “Trump” electronic firecrackers as safe and environment-friendly alternatives.

The three are the new and improved models of e-firecrackers that he conceptualized and developed weeks before New Year’s Eve last year, the report said.

The e-firecrackers are made up of electronics that load electricity to produce loud sounds, similar to the explosion of piccolo firecrackers but much louder.

E-firecrackers run on electricity and could be set off with a lighted match or lighter just like any traditional firecracker, said the news portal.

The cannon-type e-firecrackers are reportedly produced by Pagayon’s Oral Educational Distributor and showcased and offered for sale at FISPC showroom and business center at Delta building, corner Quezon and West avenues in Quezon City.

“These are much-improved versions of the e-firecracker we came up with last year,” Pagayon was quoted as saying by Philippine Star.

The e-firecrackers look like cannons, Pagayon admitted, since they are also meant to serve as the modern, high-tech versions of the bamboo cannons that were crudely built by Filipinos in the past to make noise during the New Year revelry, the report said.

Interior Secretary Ismael Sueno separately urged the public to use cellphones and other safer methods instead of firecrackers to celebrate Christmas and New Year.

Sueno reportedly said it is better for people to avoid firecrackers, lowering the risk of being included in the list of firecracker-related injuries.