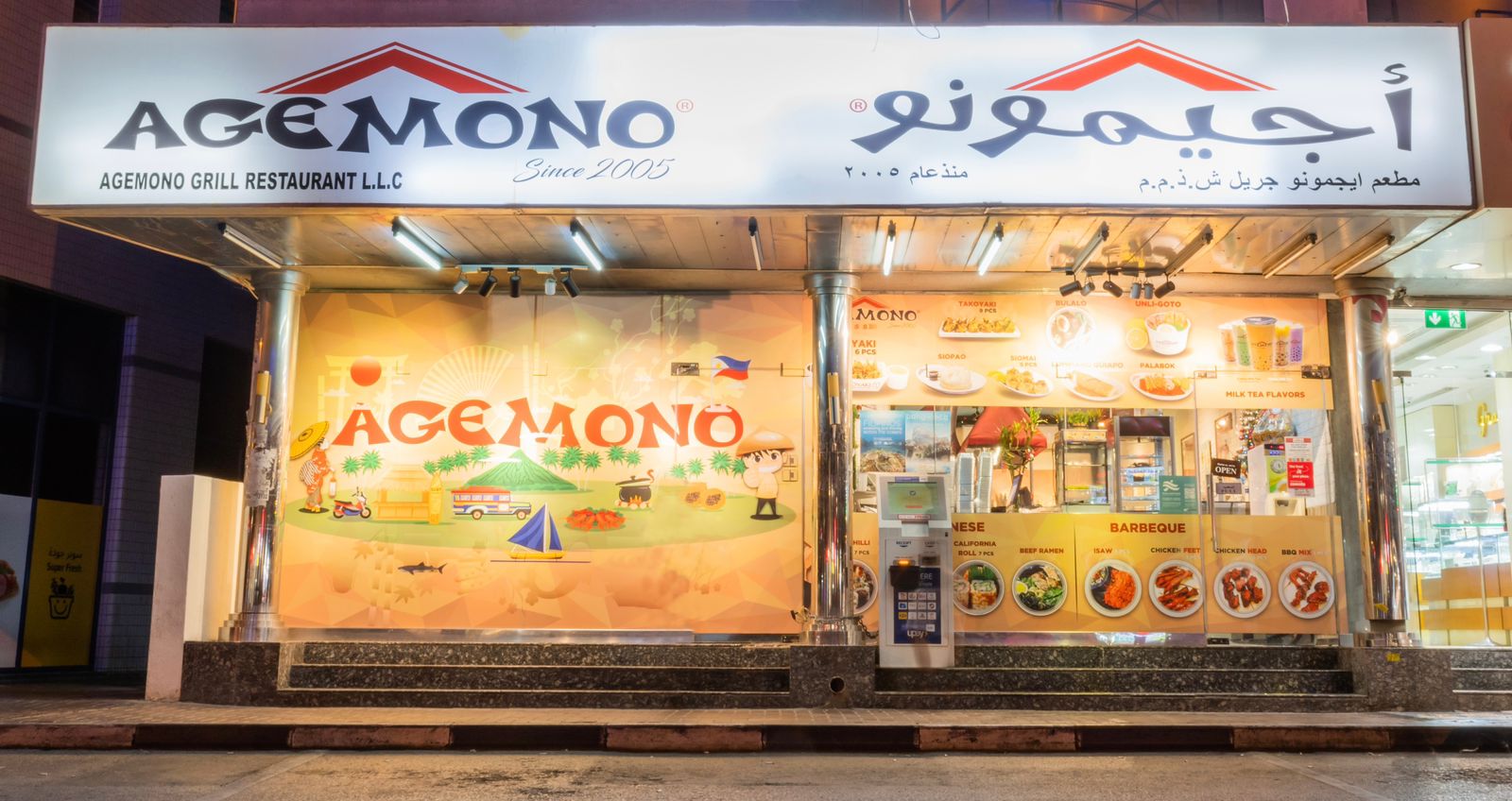 In 2005, a small family business sprung up in Dubai called Agemono entered its humble beginnings as a restaurant that offers a memorable dining experience banking on delicious recipes gathered from all around Asia for Filipinos and expats of other nationalities to enjoy.

A year later, Roberto Capulong joined as its Operations Manager in 2006 where he saw the potential of the restaurant to continue growing and expanding its reach. Since then the restaurant has served millions of UAE residents with their signature Asian dishes spanning Japanese, Filipino, Chinese, and Thai cuisines over seven branches spread out in Dubai, Abu Dhabi, and Sharjah.

When its original owners decided to go home for good in the Philippines in 2018, Robert together with his wife Andrea, continued the legacy of Agemono. With a new management by the year 2019 the couple reorganized Agemono from its original ‘buffet’ concept to take the restaurant to the next level by bringing in new innovative ideas. It shifted its focus to on “on-the-go” food that’s affordable yet still delicious to serve to their growing number of customers, centering its operations in Dubai. 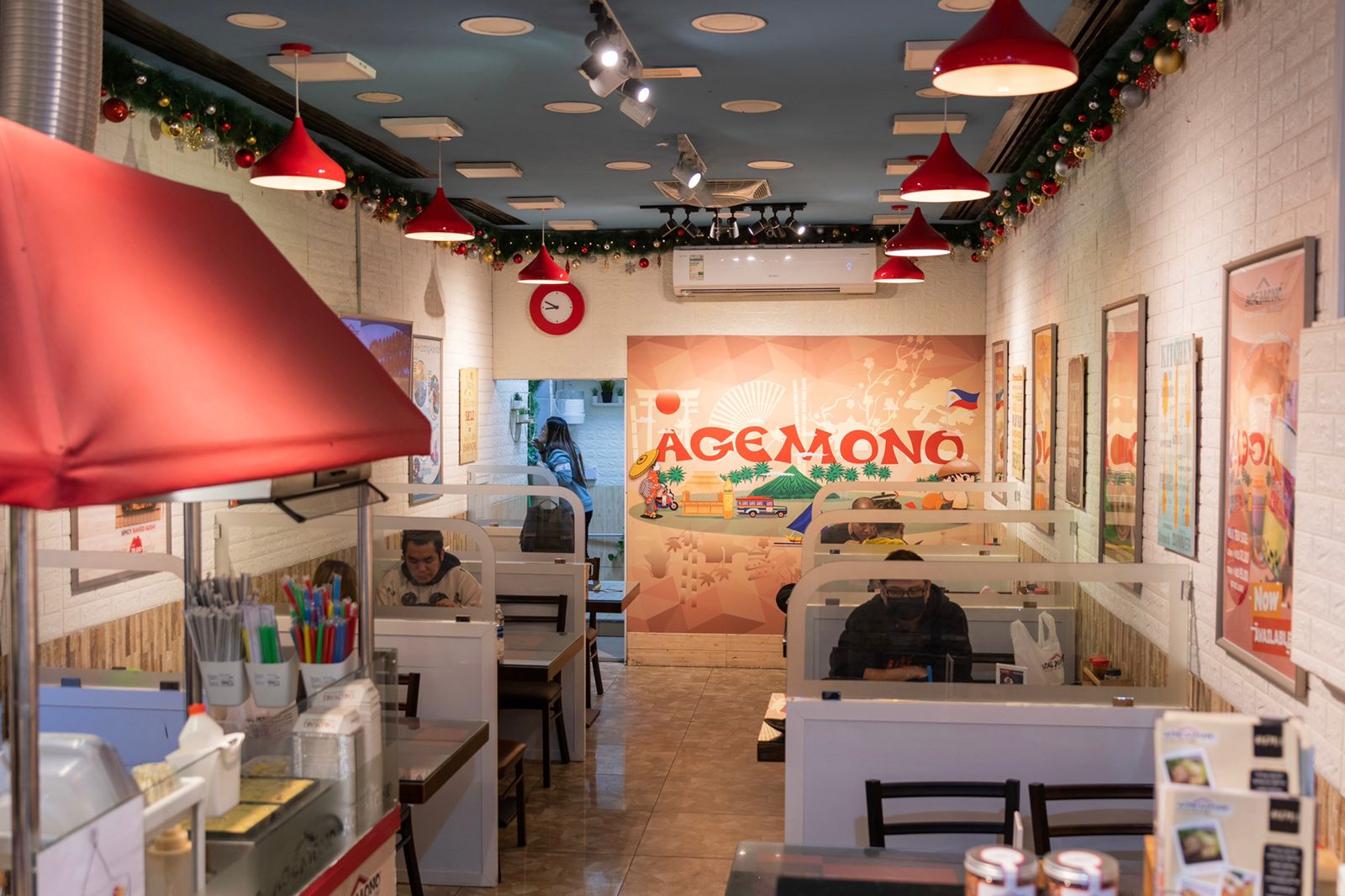 Here are some of the must-try dishes of Agemono Express that they will serve during the ongoing Philippine Food Festival called their ‘Bangkota’ menu exclusively available at their Satwa at Burjuman Branches, as well as their classic menu items that you shouldn’t miss:

Tapsilog. Agemo prepares their special marinated pieces of tender beef that has been fried to perfection alongside their special fried rice and sunny side up egg for this classic ‘Tapsilog’ combo. Each bite of the beef gives out that mix of juicy umami taste alongside a sweet-salty taste profile that’s complemented well by the flavorful fried rice.

Chicken Chopsuey. You can never go wrong with Fried Chicken, especially for Filipinos! Agemono gives this Bangkota menu a special twist with its own iteration of the Chopsuey that’s served with a mix of freshly-harvested vegetables, quail eggs, with a strong chicken sauce base.

Tahong Guisado. Love Mussels? Agemono’s Tahong Guisado is a modern take on the Filipino favorite where diners can have a taste of the sea alongside each spoonful of rice.

Ube Taro MilkTea. All of the ‘Bangkota’ meals are also served alongside Agemono’s delicious MilkTea that’s a favorite flavor among Filipinos nowadays. 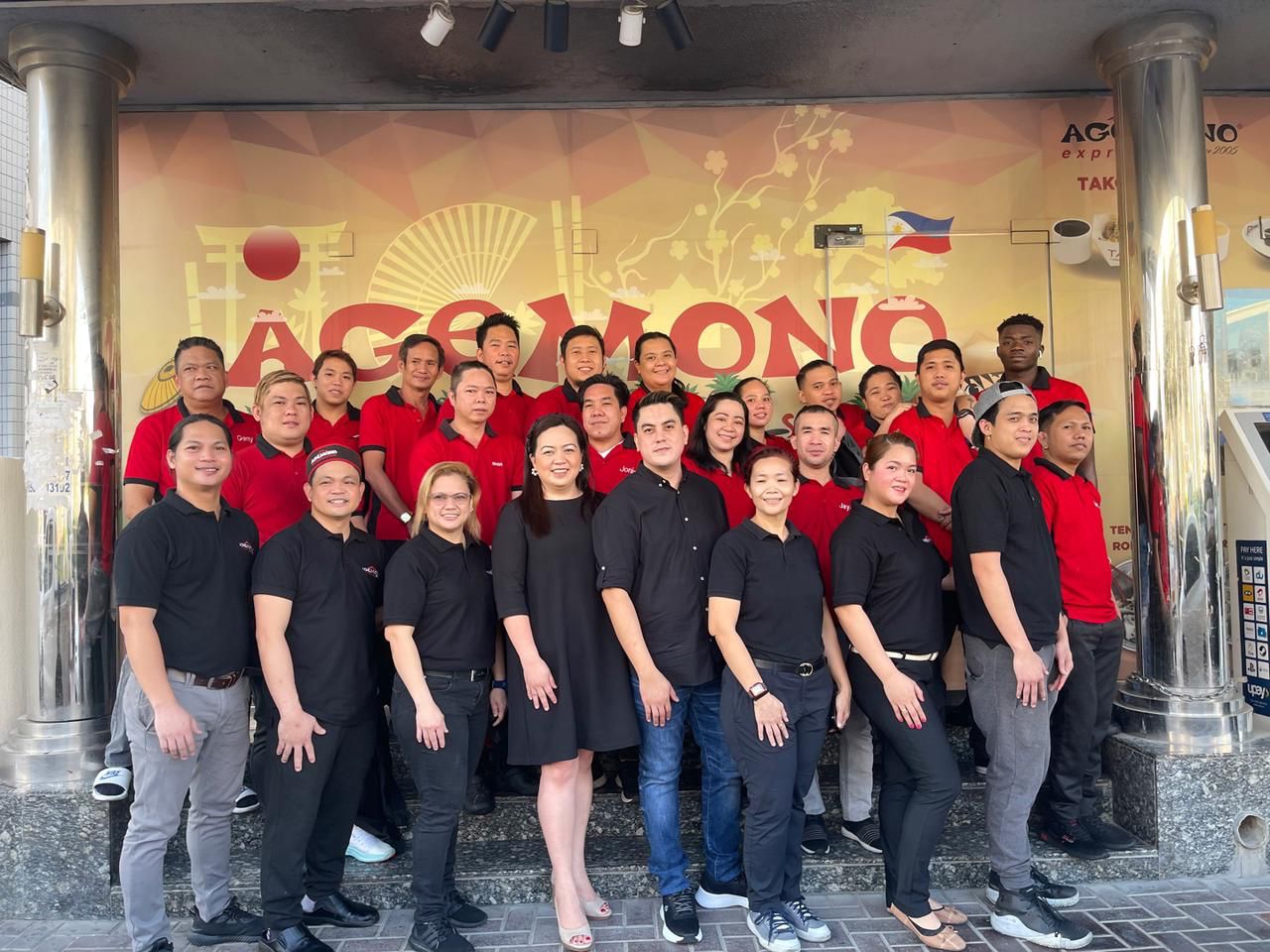 Takoyaki. Agemono has perfected this dish that originates from Japan. The restaurant serves up its signature special mix of batter, vegetables, and octopus with a fulfilling, scrumptious taste at every bite.

Sushi. The restaurant also prepares sushi that’s filled to perfection and taste with the freshest ingredients that Dubai has to offer.

Nestled at the heart of Satwa as its main branch, Agemono also has several other branches where Filipinos are found in large numbers such as Burjuman and Deira. The restaurant also has express kiosks found inside the Philippine Supermarket, Ansar Gallery in Deira, and regularly participates in Dubai’s “night markets”, with two separate kiosks. 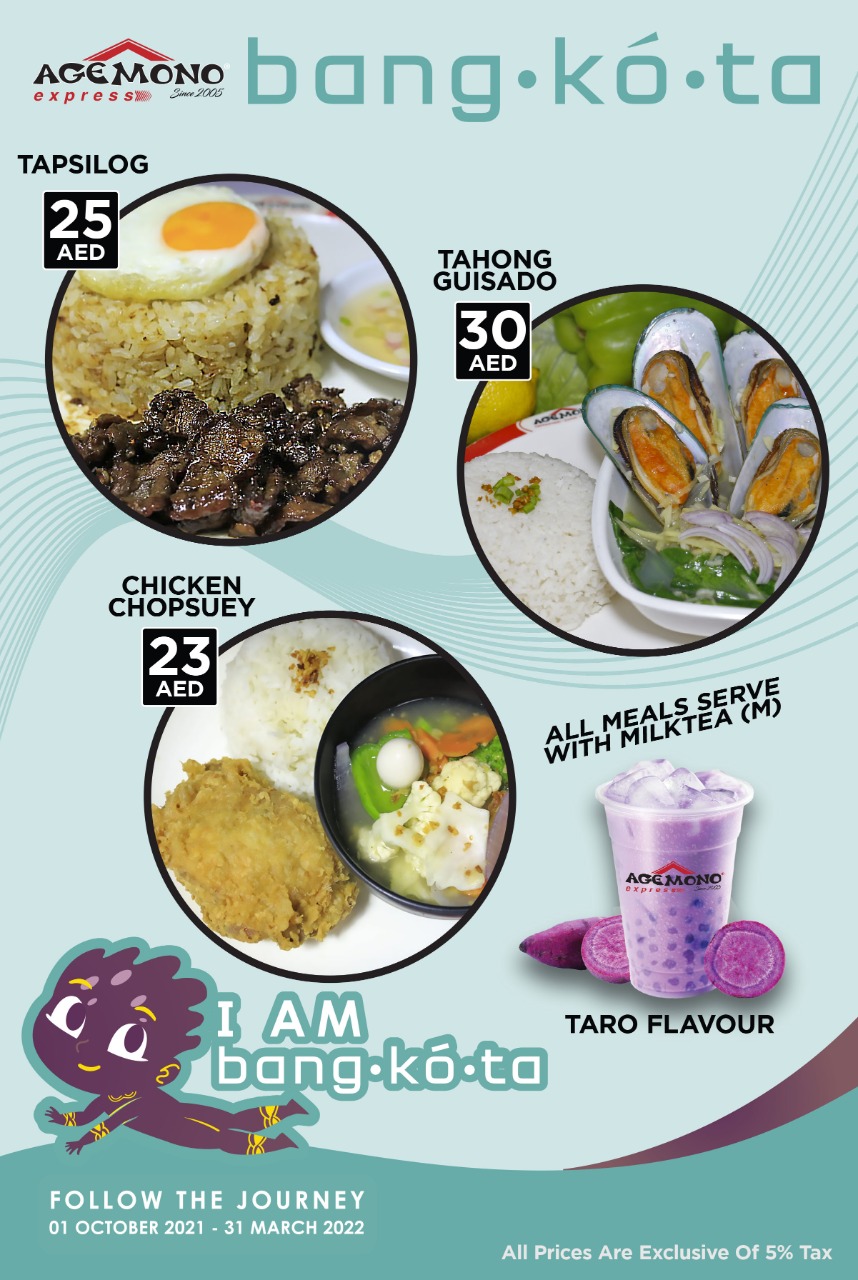 The Filipino Times is the chronicler of stories for, of and by Filipinos all over the world, reaching more than 236 countries in readership. Any interesting story to share? Email us at edito[email protected] 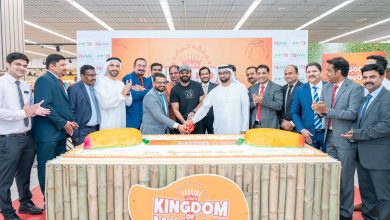 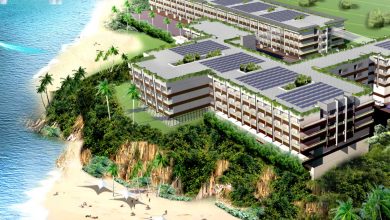 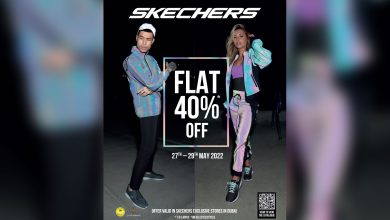 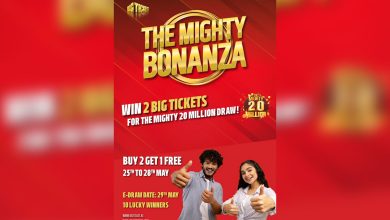 This website uses cookies to improve your experience while you navigate through the website. Out of these, the cookies that are categorized as necessary are stored on your browser as they are essential for the working of basic functionalities of the website. We also use third-party cookies that help us analyze and understand how you use this website. These cookies will be stored in your browser only with your consent. You also have the option to opt-out of these cookies. But opting out of some of these cookies may affect your browsing experience.
Necessary Always Enabled
Necessary cookies are absolutely essential for the website to function properly. These cookies ensure basic functionalities and security features of the website, anonymously.
Functional
Functional cookies help to perform certain functionalities like sharing the content of the website on social media platforms, collect feedbacks, and other third-party features.
Performance
Performance cookies are used to understand and analyze the key performance indexes of the website which helps in delivering a better user experience for the visitors.
Analytics
Analytical cookies are used to understand how visitors interact with the website. These cookies help provide information on metrics the number of visitors, bounce rate, traffic source, etc.
Advertisement
Advertisement cookies are used to provide visitors with relevant ads and marketing campaigns. These cookies track visitors across websites and collect information to provide customized ads.
Others
Other uncategorized cookies are those that are being analyzed and have not been classified into a category as yet.
SAVE & ACCEPT
365 shares
Close