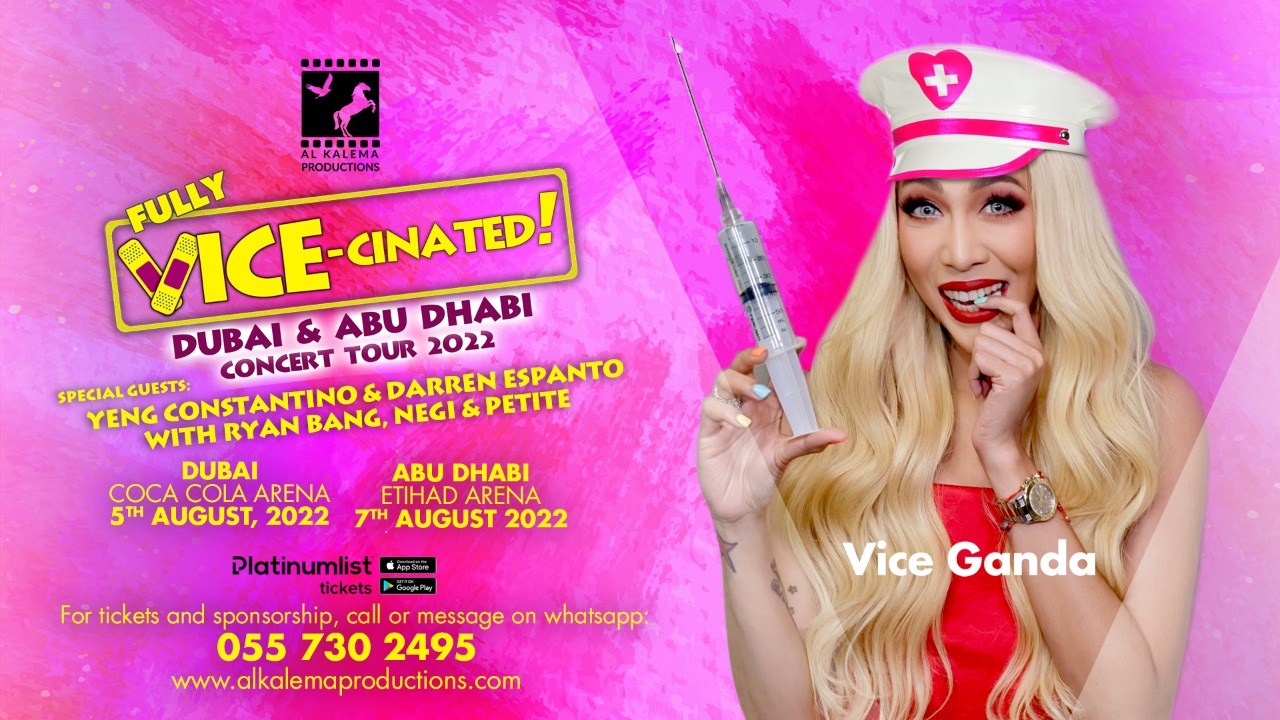 Filipinos who wish to enjoy an unforgettable and ‘unkabogable’ night in the UAE will enjoy two nights with one of the Philippines’ most sought-after comedians of the decade, Vice Ganda!

Produced by Al Kalema Productions and organized by MDM Global bring Vice Ganda’s ‘Fully Vice-cinated’ Concert Tour for the first time in the MIddle East with two nights at the Coca-Cola Arena in Dubai this August 5 and at the Etihad Arena in Abu Dhabi this August 7.

Performing alongside Vice Ganda are award-winning singers Yeng Constantino and Darren Espanto, who both performed at the recently-concluded Expo 2020 Dubai. Joining the concert as well are hosts and comedians Ryan Bang, Negi & Petite.

Vice Ganda shot to fame with his antics when ABS-CBN launched its the talent show ‘Showtime’ in October 2009. The award-winning comedian also topbilled several of the Philippines’ highest-grossing films including Beauty and the Bestie, The Super Parental Guardians, and The Amazing Praybeyt Benjamin to name a few.

Tickets to Vice Ganda’s ‘Fully Vice-cinated’ concert are now available at Platinumlist at on the official websites of Coca-Cola Arena and Etihad Arena. Filipinos interested to get more tickets or to find out more about the upcoming concert can contact the WhatsApp number: 055 730 2495

This website uses cookies to improve your experience while you navigate through the website. Out of these, the cookies that are categorized as necessary are stored on your browser as they are essential for the working of basic functionalities of the website. We also use third-party cookies that help us analyze and understand how you use this website. These cookies will be stored in your browser only with your consent. You also have the option to opt-out of these cookies. But opting out of some of these cookies may affect your browsing experience.
Necessary Always Enabled
Necessary cookies are absolutely essential for the website to function properly. These cookies ensure basic functionalities and security features of the website, anonymously.
Functional
Functional cookies help to perform certain functionalities like sharing the content of the website on social media platforms, collect feedbacks, and other third-party features.
Performance
Performance cookies are used to understand and analyze the key performance indexes of the website which helps in delivering a better user experience for the visitors.
Analytics
Analytical cookies are used to understand how visitors interact with the website. These cookies help provide information on metrics the number of visitors, bounce rate, traffic source, etc.
Advertisement
Advertisement cookies are used to provide visitors with relevant ads and marketing campaigns. These cookies track visitors across websites and collect information to provide customized ads.
Others
Other uncategorized cookies are those that are being analyzed and have not been classified into a category as yet.
SAVE & ACCEPT
2445 shares
Close