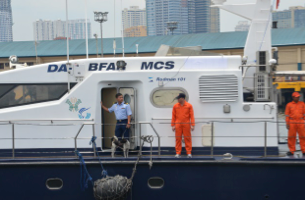 Manila Regional Trial Court Branch 15 convicted the eight of homicide, and sentenced them to 8 years 1 day to 14 years 8 months, 1 day imprisonment, and P50,000 in civil indemnity and P50,000 in moral damages.

The court found them to have shot dead Taiwanese Hong Shi Cheng in a sea chase off the coast of Batanes and Babuyan Islands in May 2013.

Investigation showed that the Taiwanese vessel was riddled with bullets which matched the firearms from the PH vessel.

The deadly incident has strained relations between Taiwan and the Philippines. The Philippine government had apologized and recommended the filing of charges against the accused.