According to the memorandum dated March 1, 2019, Mayor Gerard Espina, the town mayor of Naval, Biliran, has taken this step after “a significant number of employees were reported to be playing mobile games, particularly Mobile Legends (ML) and Player Unknown’s Battlegrounds (PUBG) during office hours.” 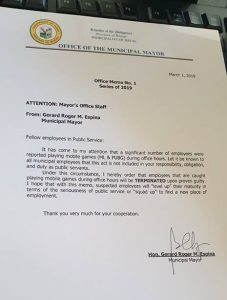 Espina added that anyone caught playing ML or PUBG will be terminated. “Under this circumstance, I hereby order that employees that are caught playing mobile games during office hours will be [terminated] upon proven guilty,” it stated.