The UAE passport has been deemed the most powerful in the Gulf region and is now ranked 23rd globally, thus providing more ease and convenience to citizens.

The latest Henley & Partners Passport Index released on Tuesday, May 22, revealed that the UAE showed the fastest gains in visa-entry points.

The UAE passport remains to be the biggest gainer in terms of rank rising 15 notches from number 38 last year.

It has also jumped 39 spots, since the inception of the list in 2006

With the addition of these countries, UAE residents can now visit 154 countries visa-free. 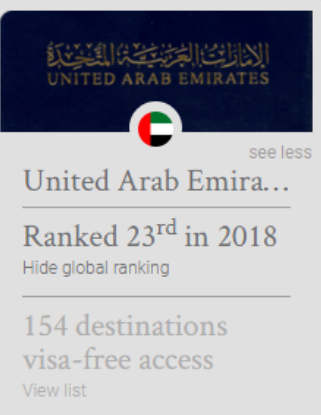 Japan topped this year’s list with access to 189 countries. Singapore and Germany were tied at second place with 188 while close behind were Sweden, Italy, South Korea, Spain, Finland, and France with 187.

The Henley Passport Index is an annual list of most powerful passports. The Index surveys a total of 199 different passports against 227 different travel destinations, which includes countries, territories, and micro-states.