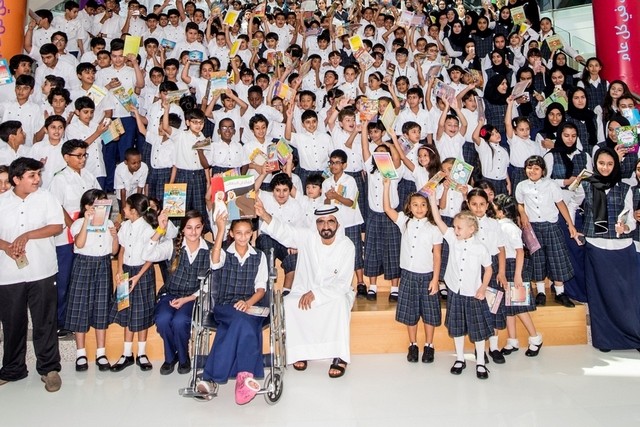 DUBAI: UAE’s Reading Nation campaign ended on Wednesday with over Dh80 million in donations enough to generate at least 8.2 million books for underprivileged children across the globe who are hungry for knowledge.

His Highness Sheikh Mohammed bin Rashid Al Maktoum, Vice President and Ruler of Dubai, made the announcement on his official Twitter account, reported The National.

“The books will open wide doors of hope for millions of needy students and refugees. They embody the divine message that we are truly a ‘Read’ nation. I thank everyone who has supported this initiative. Ramadan will always be a month of charity, and the UAE is, and will always remain, a generous nation and a global capital of benevolence,” said Sheikh Mohammed.

When the campaign was launched at the start of Ramadan, the goal was to raise fund for just five million books.
But with overwhelming public support, the campaign will now distribute over 8 million books to refugees, 3,500 school libraries across the world and aid organizations running educational programs.

Mohammed Al Gergawi, secretary general of the Mohammed bin Rashid Al Maktoum Global Initiatives, said the campaign is part of the UAE’s global development initiatives.
“This year’s campaign complements the series of global development initiatives that are led by the UAE and focused on dealing with the root causes of poverty, ignorance and intolerance,” said Al Gergawi, who is also Minister of Cabinet Affairs and the Future.

“The Reading Nation campaign came at a perfect time during the UAE Year of Reading and the holy month of Ramadan to help boost knowledge in Arab and Muslim countries.”
Sheikh Mohammed donated a 106-year-old piece of the Kaaba’s Kiswa that generated Dh2.1m in sales for the charity auction, while an autographed panel of excerpts from his poetry book Flashes of Verse sold for Dh1.1m, The National reported.