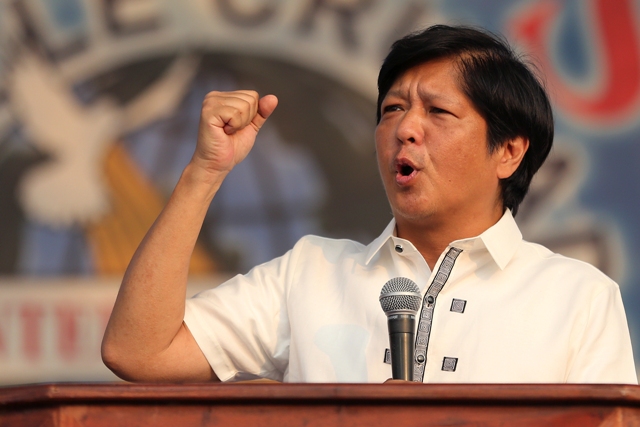 MANILA: Losing vice presidential bet Senator Ferdinand “Bong Bong” Marcos, Jr. filed on Wednesday an election protest to compel the Supreme Court to order a recount in more than 30 areas where he claimed he was cheated and declare him as the winner in the May 9 national elections.

The only son of former strongman Ferdinand Marcos who was ousted in power in a popular bloodless people’s power revolution in 1986, the senator personally went to the Supreme Court, which serves as the Presidential Electoral Tribunal, to lodge his 1,000-page petition.

Apart from the petition itself, Marcos also submitted a 20,000-page affidavit, certificates of canvass and other supporting documents, which he said, would clearly prove the massive electoral fraud committed in the history of the country, repored the Philippine News Agency (PIA).

His lawyer, George Garcia, said Vice President-Elect Leni Robredo’s vote increased through fraud, anomaly and irregularities.
Robredo who narrowly won by over 260,000 votes against Marcos is scheduled to be sworn-in on Thursday.

The Marcos camp is asking PET to reopen ballot boxes in 36,465 clustered precincts being protested which include Cebu, Leyte, Negros Occidental, Negros Oriental, Samar, Isabela, Pangasinan, Cebu City, Zamboanga and Bukidnon, which were considered as bailiwicks of Marcos.

They are also asking to nullify the election results in Lanao Del Sur, Maguindanao at Basilan, and to have a recount in the 22 provinces and five cities.

Marcos claimed there was irregularity in the Automated Election System (AES); second, there were vote-buying, pre-shading and failure of elections; and third, the alteration made by the Smartmatic in the hash code of the transparency server.