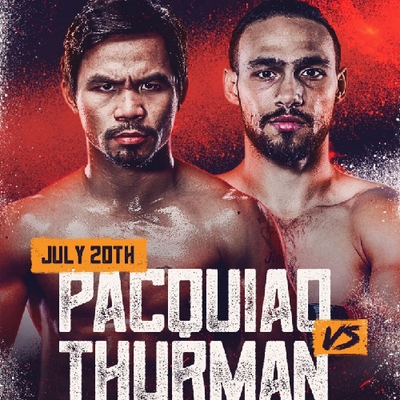 According to report by the Philippine Star, there are 110 scheduled rounds in 11 bouts arranged by MP Promotions in cooperation with Al Haymon’s Premier Boxing Champions and matchmaker Tom Brown, sanctioned by the Nevada State Athletic Commission.

The bill features five 12-rounders, including four to be shown on pay-per-view in the US. Eight countries are represented in the blockbuster event – the Philippines, US, Cuba, Kazakhstan, Mexico, Dominican Republic, Nigeria and Turkey, still according to Philippine Star.

The Pacquiao-Thurman duel will highlight the PPV cablecast.

Libranza, 25, and Inson, 28, are in Pacquiao’s stable while Dato, 26, who was born in Bangar, La Union and resides in Santa Maria, California, is known as “The Lion.” He turned pro in 2016 and has fought exclusively in the US and Mexico.