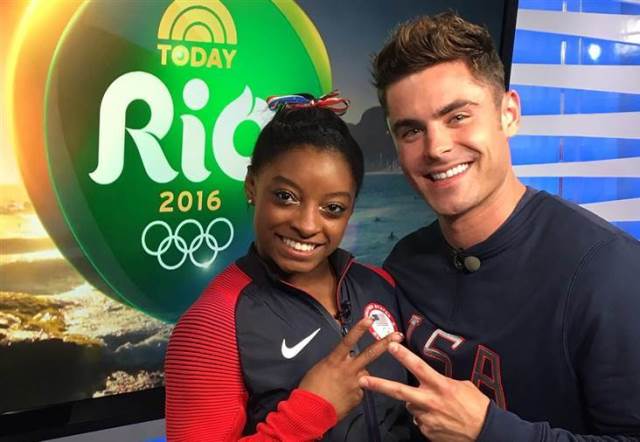 Olympic gold medalist Simone Biles has experienced a truly unforgettable moment. The 19-year-old not only bagged one bronze and 4 gold medals, but also got a surprise visit and a kiss by her celebrity crush Zac Efron.

Show host Hoda Kotb arranged Zac’s surprise visit to the gold medal-winning US Gymnastics team at the Olympics in Rio.

Photos of the gymnastics team with Zac are posted on their official Twitter account, with a picture of Zac leaning over to kiss Simone on the cheek highlighted.

A Boomerang video of the moment was posted by Simone herself, with the caption “on cloud 9.”

Simone posted a few selfies with Zac right afterwards, still gushing over the moment with the caption, “he kissed me on the cheek just letting y’all know.”

For further proof, the gymnast posted a video from her Snapchat, where Zac can be heard asking her to tell him when the snap was starting. “It’s going,” Simone told him, and he gave her a kiss on the cheek as those in the background cheered.

It’s no secret that Simone likes Zac Efron. In an interview with Ellen DeGeneres in March, revealed her crush, and the comedian in turn gave her a gift: a leotard with Zac Efron’s face printed all over it.

Zac also posted photos of him picking Simone up.

The actor, meanwhile, said that it was also a “dream come true” for him to meet the Olympic gymnastics team, which he nicknamed the Final Five.