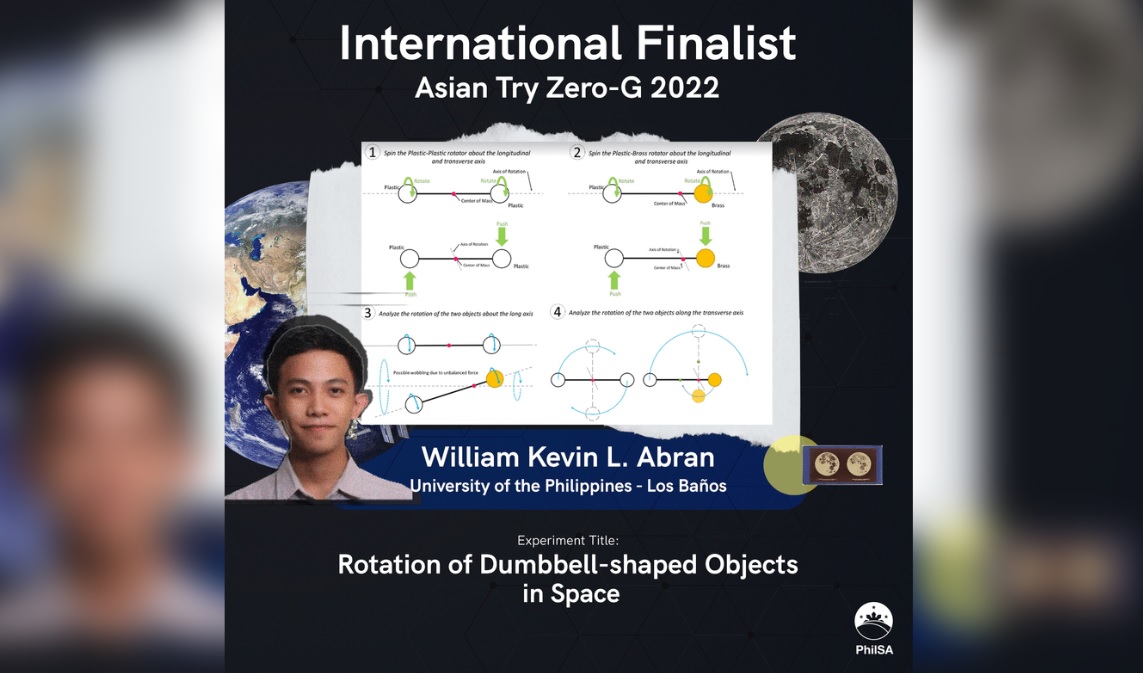 An entry of a student from the University of the Philippines-Los Baños was among the six experiments chosen to be performed in the International Space Station (ISS) in the fall of 2022.

William Kevin L. Abran’s experiment proposal was one of the 24 international finalists of the ATZG competition and “Rotation of ‘Dumbbell-shaped’ Objects in Space”, is one of six experiments chosen as part of the Asian Try Zero-G (ATZG) 2022 programme.

Asian Try Zero-G 2022 is an international cooperation experiment launched by the Japan Aerospace Exploration Agency (JAXA), targeting the youth in the Asia-Pacific region to expand the use of the ISS and the Japanese Experiment Module “Kibo” and contribute to Sustainable Development Goals (SDGs) through human resource development and it will be conducted by astronaut Koichi Wakata at the ISS/Kibo (Japanese Experiment Module).

Last Friday (June 24), Abran’s experiment was announced by the Japan Aerospace Exploration Agency (JAXA) as a finalist in the Category 2 for Individual or group applicants, 27 years old and younger as eight Asian Beneficial Collaboration through “Kibo” Utilization (Kibo-ABC)-participating countries/regions were called for the ATZG 2022.

A total of 201 submissions were received from 480 students and young engineers/researchers hailing from countries such as Australia, Bangladesh, Singapore and Thailand.

Proposals were evaluated based on scientific significance, novelty, safety, resource requirement, and feasibility and the Philippine Space Agency (PhilSA) screened local proposals in May and selected five experiments, including Abran’s, to enter the final round of evaluation by JAXA.